"When will you ever hear the word 'liberal' attached to a Republican?" Bozell asked, noting that Murkowski is in fact a liberal Republican.

"In eight years, she was on [CBS] one time. In the last week, she's been on there twice," the Media Research Center president noted after viewing a clip of CBS "Evening News" Katie Couric's November 15 interview with the Alaska senator.

"Matt Lauer is absolutely delusional," opined Bozell, pointing to Lauer's criticism of the former president's defense of his signature tax cut legislation. "The tax cuts caused the recession? The reality is, the Bush tax cuts gave us four million jobs. Those are the facts; you can't go against these facts."

With all the hype about Keith Olbermann's brief suspension and his triumphant return to MSNBC Tuesday, one would have expected his ratings to explode as first-time viewers tuned in to see what all the fuss was about.

When the dust settled, the "Countdown" host's total viewers rose 35 percent from last Thursday's show before the controversy began, but most embarrassingly, Rachel Maddow actually bested the most conceited man on television in the all important 25-54 year-old demographic (via Steve Krakauer):

On a special edition of Sunday’s Hannity show, FNC host Sean Hannity informed viewers that Restoring Sanity Rally participant and singer Cat Stevens - who converted to Islam in the 1970s and changed his name to Yusuf Islam - several times declared that Salman Rushdie should be killed after Iranian leader, the Ayatollah Khomeni, issued a fatwa on the British author in 1989 for publishing his book the Satanic Verses.

A recounting of Stevens’s history of verbal attacks on Rushdie at hotair.com includes both video of a Stevens appearing on a British television program, and a New York Times article quoting from the program.

Below is a transcript of the relevant portion of the Sunday, October 31, Hannity show on FNC:

The folks at MSNBC are for some reason still under the impression that they are anything but a far less successful liberal alternative to Fox News.

The former channel's president, Phil Griffin, tried to perpetuate that delusion in a blog post by New York Times media blogger Brian Stelter on Sunday. Griffin claimed that MSNBC, unlike Fox News, does not help guests who are political candidates solicit funds on air.

In fact, MSNBC talker Ed Schultz has done just that on multiple occasions. “Show me an example of us fund-raising,” Stelter quotes Griffin as saying. Perhaps he should have reviewed his own channel's coverage before making that challenge.

If Juan Williams knew at 9:45 p.m. yesterday that he was out of a job, he sure didn't show it.

The same night he was fired by NPR, Williams appeared on Sean Hannity's "Great American panel" segment in an ostensibly cheerful mood, exchanging playful banter with the host and panelists.

"I love the sartorial splendor of his mutton chops," quipped Williams, referring to New York gubernatorial candidate Jimmy McMillian's facial hair. "And I'm thinking what would you look like with this? A little bit of that deputy dog look. You know what I'm talking about? You would look marvelous, my friend. That would be you as more liberal. That was a hip, younger Sean."

By NB Staff | October 8, 2010 11:29 AM EDT
While the "media will wade into a Tea Party event with hundreds of thousands of people looking for that one brain-dead Lyndon LaRouche follower" who says something asinine that they can plaster "all over the news," they have ignored the insane rhetoric coming from featured speakers at last Saturday's "One Nation Working Together" rally, NewsBusters publisher Brent Bozell told viewers of the October 7 edition of "Hannity."

Appearing on last night's 9 p.m. Eastern program for the popular recurring "Media Mash" segment, the Media Research Center quoted the extreme rhetoric of musician Harry Belafonte, which was ignored by the mainstream media:

What – was Janeane Garofalo busy this week? If not, she has some real competition in the "lefty comic making outrageous statements" category.

On HBO’s Oct. 1 “Real Time with Bill Maher,” during the “Overtime” segment available on HBO.com, left-wing comedian David Cross of “Arrested Development” fame appeared to offer his view on issues of the day. This segment of the program is produced generally to answer viewer emailed questions. One of those questions was if people in the media “should be held more legally accountable for presenting false or misleading information.”

The host, Bill Maher likened that scenario to the system in place in the United Kingdom. However in the United States, Americans are protected by the First Amendment and he explained the legal implications of speech in the U.K. compared to the U.S. But in Cross’ estimation, that protected right is somehow wrong. He named two Fox News Channel hosts, Bill O’Reilly and Sean Hannity, and declared he would like to see them taken off of the airwaves although he wasn’t clear about what “false or misleading information” they may have presented that would warrant this action.

“I think so, absolutely, and I say that as somebody who would like to see Bill O’Reilly and Sean Hannity off the air, you know,” Cross declared with an approving response from the audience. “So, I think to -- it’s just part of the job. It should be part of the job, you know, if you knowingly do that, then absolutely you should lose your job. We don’t get to, you know, lie and make up things in our jobs, you know. And nobody really does.” 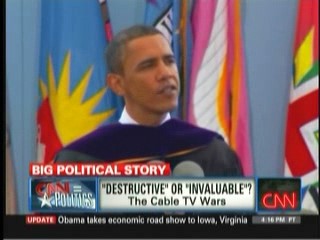 CNN's John King on Wednesday mocked Barack Obama for calling Fox News a "destructive" force in our society while at practically the same time a White House spokesman was saying MSNBC's Keith Olbermann and Rachel Maddow provide "an invaluable service" to the country.

As NewsBusters reported Tuesday, the President bashed FNC in a just-published interview with Rolling Stone magazine shortly before his Deputy Press Secretary Bill Burton was praising MSNBC during a gaggle held on Air Force One.

With this in mind, on Wednesday's "John King USA," the host surprisingly derided the White House's inconsistency (video follows with partial transcript and commentary):

Most comically, Press made this pathetic and indefensible remark on MSNBC, the nation's most biased cable news network that hires anchors who categorically refuse to allow any dissenting views on their shows.

But Press was clearly missing the irony in the following position espoused on "The Ed Show" as was the host who seemed to very much agree (video follows with transcript and commentary):

MRC-TV: Brent Bozell on Hannity: 'Obama Needs the Media to Pull His Chestnuts Out of the Fire'

Tackling the media's most egregious examples of liberal bias, Bozell quipped, "Obama needs the media to pull his chestnuts out of the fire in this campaign." [MP3 audio here.]

He joked of Smith's comments, "Just a couple hundred billion dollars more." The MRC President added, "Only a liberal Democrat like Harry Smith believes that a spending bill of $862 billion isn't big enough."

Obama Gets Highest Ratings from Followers of Olbermann, Maddow and NYT

A new study by the Pew Research Center found that Barack Obama gets his highest approval ratings from people that watch MSNBC's Keith Olbermann and Rachel Maddow, as well as from readers of the New York Times.

The numbers are rather staggering, as 84 percent of regular viewers of MSNBC's "Countdown" give the President high marks for his job performance.

But that's just one of the interesting findings in the Pew survey released Sunday: