Liberal publications loathe Fox News hosts naturally. But it's very unusual for them to take that loathing and spread it on a liberal star like Rachel Maddow. But on Thursday, The New Republic posted an article on "MSNBC's Wild Ride" by Jacob Bacharach, which argued Maddow is "frequently just as bonkers" as Glenn Beck was on Fox News in the Obama years. Slate's Willa Paskin added Sean Hannity to the mix in her March 29 Maddow takedown.

According to contemporary reports, as here and here, Egyptian protesters who pelted the motorcade of then Secretary of State Hillary Clinton with tomatoes during her visit to Egypt last July were chanting "Monica! Monica!"

So who did Al Sharpton, on his MSNBC show this evening, blame for the tomato pelting? Why, Glenn Beck and Michele Bachmann, of course!  According to the Reverend Al, it was the raising by Beck and Bachmann of the possible connection of Hillary's top aide, Huma Abedin, to the Muslim Brotherhood that outraged the Egyptian horde. Sharpton says "there is absolutely nothing" to back the claims of Abedin family ties to the Muslim Brotherhood. That is simply false, as this National Review item documents. View the video after the jump.

The liberal media have spent 12 years feeling sorry for Al Gore.The Man Who Should Have Won in 2000 has had megatons of positive publicity dumped on him, hailing him as the “Goracle.” They cheered as leftists honored him with the Nobel Peace Prize and gave an Oscar to his filmed eco-sermon “An Inconvenient Truth.”

So when Gore sold his left-wing cable channel Current TV to al-Jazeera for $500 million, where were they? Despite the fact that conservatives thought the deal sounded like a ridiculous April Fools joke, the networks had nearly nothing to say. ABC skipped it entirely. CBS and NBC offered a perfunctory sentence on a couple of newscasts. 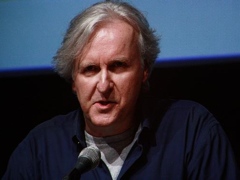 Cameron said at a news conference that he would like to shoot "those boneheads," referring to skeptics of anthropogenic global warming. "Anybody that is a global warming denier at this point in time has got their head so deeply up their a** I'm not sure they could hear me," Cameron added.

As for Beck, "he's a f****** a**hole," the 2010 Oscar nominee so eloquently put it. He backtracked a bit, but still maintained that the FNC host is "dangerous because his ideas are poisonous," echoing a statement by NPR's Cokie Roberts yesterday. "Of course he wound up on Fox News, which is where he belongs, I guess."

The Nation: Prominent CPAC Speakers All Sound like Joe Stack 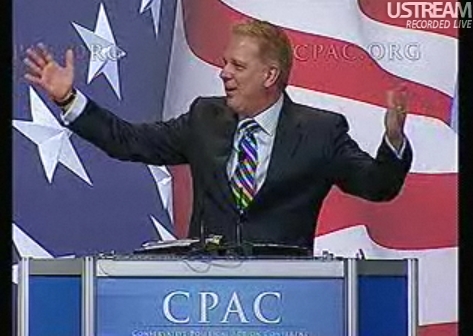 We've seen the likes of Time Magazine, MSNBC, the Washington Post, and Newsweek link the Joe Stack airplane attack to the conservative movement.  But in an interesting twist, a political blogger for The Nation has inexplicably linked Stack to several players at the recent CPAC convention - including Tim Pawlenty, Scott Brown, and most notably Glenn Beck.

Leslie Savan wastes little time delving into despicable comparisons from the onset with the title to her rant:

From there, the associations to Stack stretch ever further.  Savan somehow manages to draw parallels between Pawlenty's comment about taking a 9-iron to big government, and the attack (emphasis mine throughout):

"Minnesota governor Tim Pawlenty strained to hit a Southern-sheriff note of populist threat by suggesting, rather oddly, that conservatives were cuckolded wives who, like Tiger Woods's spouse, should "take a 9-iron and smash the window out of big government in this country!"--thereby managing to invoke both the wall of shattered glass windows at the Echelon Building and the marital troubles that may have contributed to Stack's anger."

It would seem the term ‘metaphor' is beyond the writer's grasp.

Next up is an out of context quote from Scott Brown:

In his latest opinion piece, Roger Ebert proved that he is very skilled at one thing and one thing only - movie reviews.

Ebert penned a piece in his Journal for the Chicago Sun-Times today; a scathing critique which detests the overt melodrama, the wretched dialogue, and the lack of a plot line.  What was he reviewing?  The Republican base.

Ebert hammers the party's base with such sensationalistic rhetoric that it is difficult to believe he withheld laughter while typing away on the keyboard.  And the work is wrought with such falsehoods, inaccuracies, and sweeping generalizations, that it is difficult to fathom that this work could have passed by the desk of anyone having the word ‘Editor' following their name.  Yet somehow, it did.

Behar’s Beck Obsession -- Maher: 'We’re Going to Find Glenn Beck Dressed as a Woman or Playing with His Feces'

Perhaps this is going to be a common theme of CNN Headline News "The Joy Behar Show." For the second night in a row, two out of two shows - Behar went after the former CNN Headline News host, now Fox News host Glenn Beck as a head of the conservative movement.

On her Sept. 30 show, Behar guests included HBO "Real Time" host Bill Maher and conservative author and columnist Ann Coulter. One had a favorable view of Beck, and the other - not so much.

On Behar's first show, Bette Midler contended Beck would lead to a Rwanda-style civil war in the United States. Behar posed a similar question to Maher on her second show.

Newsweek's Fineman: Things Rogers Ailes 'Allowing on his Network Don't Do Justice to His Reputation'

So what if his network is drawing a larger audience than its combined competition? So what if one of his newest shows has drawn unprecedented numbers for a start-up that airs at 5 p.m.? According to Newsweek's Howard Fineman, Fox News President Roger Ailes is tarnishing his own personal reputation.

It could just be sour grapes for Fineman, who is affiliated with rival network MSNBC and was appearing on that network's "Countdown" with fill-in host David Shuster, but he attacked Fox host Glenn Beck and the 9/12 protestors he helped inspire.

"Well, he can - he can pretend to cry all he wants on the stage and call himself a televangelist," Fineman said of Beck on MSNBC's Sept. 14 "Countdown." "He is not into uniting the country, from everything I've seen. He is making a boatload of money dividing the country. When you say with no real evidence whatsoever that the president of the United States hates white people, you aren't behaving in the spirit of 9/12, you're behaving in a spirit that we thought we've gotten rid of at the end of the civil war and the end of the second civil rights movement. So, you know, he can cry the crocodile tears all he wants. That doesn't seem to be what he's actually doing."

Gawker: 'Glenn Beck is an Actual Terrorist, and the People Attending his Rally in DC Tomorrow Are al-Qaeda in America'

Usually it is easy ignore the commentary from that great bastion of cultural insight, known as the gossip Web site Gawker. But every now and then, even Gawker steps over the line.

In a Sept. 11 post by Alex Pareene that was allegedly meant to reflect on the passing of eighth anniversary of the 9/11 terrorist attacks, Pareene launched into a hate-and-expletive-filled anti-President George W. Bush, anti-conservative and anti-Glenn Beck attack in his post. His first assault was on the prior administration.

"Shortly after (or maybe during) that day, our president at the time, a little [expletive] no one liked, handed over the reins to the most psychotic elements of his administration," Pareene said. "In the vast national wave of jingoism, paranoia, dread, and fear that followed, he and his friends led us into an unrelated war they'd been planning beforehand, allowed the CIA to wiretap and torture anyone they liked (and encouraged the CIA to wiretap and torture even more than they were comfortable with!), and regularly insisted that our memory of that day should not be sullied with critical thinking or expressions of anything other than still-palpable fear."

Only on MSNBC, the network that prides itself as the "place for politics" could you see this type of anti-religion, anti-conservative vitriol.

"When you have a party that claims to speak for God or claims that God is on its side, the rhetoric heats up and the anger heats up because it's not just a battle about ideas and positions and what's good for the country or bad for the country," Savage said. "It's a battle about what God wants and what God doesn't want. It's easier to demagogue about your enemies and to despise them and to dehumanize them in this really personal and vicious way."

Former Alaska Gov. Sarah Palin has been out of office over a month and there are still those working at major media outlets that just can't get over their obsessions with dissecting everything the former GOP vice-presidential nominee does.

Case and point - Mark Silva, a blogger for the Chicago Tribune's "The Swamp," in an Aug. 26 post took it upon himself to try to rationalize why Palin would possibly suggest to her friends and followers on social media networks to tune in to Glenn Beck's Aug. 26 program, as NewsBusters' Noel Sheppard alluded to earlier.

"Palin, who campaigned as the Republican Party's candidate for vice president last year with the warning that Democrat Barack Obama was ‘palin' around with terrorists,'' is steering fans of her Facebook site to the TV commentary of FOX News Channel's Glenn Beck, who has been warning viewers this week that Obama is getting his advice from a Communist and other radicals in the White House who have no oversight from Congress," Silva wrote.

They warned back in 2008 what might happen if Barack Obama was elected president, and according to conservative talk show host Rush Limbaugh and Fox News Channel host Glenn Beck, a lot of bad stuff is unfolding right before our eyes.

Limbaugh appeared on Beck's Aug. 26 program to discuss the threat of the federal government attempting to regulate the media. He explained the president's policy maneuvers were evidence that this can happen - with very limited opposition in the media.

"The stimulus plan - Glenn, look at what they're doing to the U.S. economy," Limbaugh said. "Anybody with a sense of economic literacy would know that this is not how you create jobs. You do not rebuild the private sector. This is being done on purpose. All of these disasters are exactly what Obama wants - the more crises, the better, the more opportunity for government to say let us in and fix the problem. And, with his number one opposition is on radio and Fox News. His number one opposition is on radio. They can't go Fairness Doctrine because it's too obvious. So, they're trying to do this backdoor route with diversity and ownership, a 100-percent tax on operating in order to pay public radio because they're supposedly fair."