Despicable CNN Will Settle Lawsuit After Trying to Ruin Sandmann

According to Cincinnati, Ohio-area Fox affiliate WXIX-19, CNN reached a settlement Tuesday with Covington Catholic High School student Nicholas Sandmann for an undisclosed amount in federal court. The news brings to an end a dispute nearly a year after CNN decided to falsely tar and feather Sandmann and his fellow students as racist rascals following a January 18, 2019 confrontation with the less-than-truthful Native American activist Nathan Phillips on the National Mall.

VIDEO The Media Love Stormy Daniels – But How Did They Treat Bill Clinton's Accusers?

Donald Trump is not the first President to have been accused of sexual improprieties. When President Bill Clinton faced allegations of sexual harassment from Paula Jones and even a rape charge from Juanita Broaddrick, the media looked for reasons not to cover those charges.

The Comcast Corporation, sole owner of NBCUniversal now, recently made the decision to refuse advertising from gun stores and ammunition manufacturers. Operating in 39 states and the District of Columbia, it is by far the largest cable company in the country. What's more, it holds a regional monopoly on cable TV in a multitude of markets, meaning it's the only affordable televised commercial access that many gun stores have.

The blanket directive was issued just as soon as its purchase of NBCUniversal was finalized, which has had a long-standing policy against gun-related ads on its networks.

USA Today's Web site features an Associated Press report with the headline "Housing starts, jobless claims in good shape."  For the many readers who just scan headlines, that sounds encouraging.  Yet by the second paragraph the article notes "that construction of single-family homes and apartments dipped 1.1% in July compared with June. . ."  And by the third paragraph:

Housing has been making a modest comeback this year. But even with the gains, the rate of construction and the level of permits remain only about half the 1.5 million annual rate considered healthy.

How pathetic is this?

It was reported Saturday that 25 Gannett Wisconsin Media journalists have been reprimanded for signing petitions to recall Republican Governor Scott Walker:

That famous line from the movie "Marathon Man" comes to mind when considering the attitude of Ohio Congressman Zack Space about ObamaCare. Back in January, after Space caught heat for voting for the House version  of ObamaCare in November, he decided it was safe to "boldly" express his opposition to the Senate bill on the heels of Nancy Pelosi declaring it DOA at the time. Here is what Space had to say in January as recorded in your humble correspondent's NewsBusters blog:

He made the announcement shortly after House Speaker Nancy Pelosi told the national media she didn't think she had the votes to pass the bill.

When Bush Plummets in Polls, It's News--Obama, Not So Much 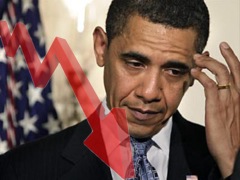 According to an Allstate/National Journal poll released Wednesday, 50 percent of Americans would vote against President Obama if the presidential elections were held today. Only 39 percent say they would vote to re-elect the president.

But so far, this stunning development--given the President's sky-high approval ratings upon entering office--has gone seemingly unnoticed by the major television networks and most prominent print publications. Aside from some prominent blogs (whose coverage is by no means substandard), the Wall Street Journal, the Washington Post, and the Washington Examiner are so far the only major outlets to report on the poll, according to a google news search (as of 2:00 PM).

'Are You Easily Disgusted?' You Must Be Conservative

The USA Weekend supplement in many Sunday newspapers across the country carried a tiny report from academe this weekend on the question "Are you easily disgusted?" Vi-An Nguyen explained that if you are, then you’re probably a conservative:

The news that the Gannett Company--the nation’s largest newspaper publisher, flagship USA Today--is forcing thousands of its employees to take unpaid leave is the latest, shocking, evidence of the ill health of the old media.

But for present purposes, let's focus on this odd nugget: Gannett has informed its employees that pursuant to federal and state law, they [emphasis added]:

Can't you just imagine the scenario?  A conscientious furloughed Gannett employee is at home trying to stay current by reading some emails, when suddenly comes a battering at the door: "FBI!  Put down the mouse and step slowly away from your computer!"