Since news broke over the weekend that former South Carolina Senator Erniest Hollings had passed, his controversial history on race has been substantially whitewashed in media reports which have gone so far as to praise him over the ending of segregation in his home state. This odd bestowing of credit comes even though he ran for governor as a segregationist, and school desegregation did not occur until after he left office in 1963.

Over the weekend, a Detroit police officer, Glenn Doss Jr., passed away after being shot while doing his duty late last week, leaving behind his girlfriend, their nine-month-old baby, and his father who is also a police officer. Among the broadcast networks, the CBS Evening News was alone in giving attention to the story as they initially ran a full two-minute report on Friday after he was injured, and then a brief followup on Monday after his passing.

Over the weekend, as the broadcast networks informed viewers of a hostage situation that took place on a Greyhound bus in Illinois, CBS and NBC both neglected to inform viewers that the perpetrator was an illegal immigrant while ABC's World News Tonight on Saturday identified Marguerito Vargas Rosas as an "undocumented immigrant." CNN's New Day Sunday also described him as an "undocumented immigrant," while FNC tagged him as an "illegal immigrant," and additionally informed viewers that he had been deported five times already.

Updated below page break | Shepard Smith is losing his 7 p.m. Eastern Fox Report slot, but will gain the post of managing editor of the network's breaking news division, Mediaite is reporting. Presumably this opens that time slot for Sean Hannity, who is losing his 9 p.m. slot to Megyn Kelly.

Smith will still retain his 3 p..m. Eastern Studio B program. The Mississippi native is no stranger to NewsBusters criticism. Last August, for example, we criticized Smith for a thinly-veiled swipe at fast-food chain Chick-Fil-A, which was being supported by fans with an "appreciation day" to show support in light of protests by pro-gay marriage groups.

During the Wednesday edition of his program, Fox News anchor Shepard Smith, not known as any sort of conservative, attacked the government for being dishonest and witholding critical information from Americans while at the same time also undertaking highly invasive surveillance programs.

“I don’t believe much of anything they say anymore. Because I can’t figure out which parts to believe, so I choose not to believe any of it,” Smith said in an interview with Fox News legal analyst Mercedes Colwin.

On Fox Report this evening, Shep sneered at Gov. Walker's budget-repair bill, sniffing at it as "so-called" reform, sarcastically adding that as far as union members facing layoffs are concerned, "it's no repair to them." 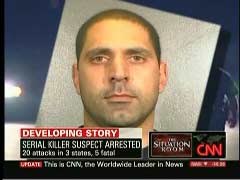 When reporting on the nationality of a criminal from another country who has already been arrested, it normally would be considered unnecessary or even uncalled for to take the extra step of explicitly identifying the suspect’s ethnicity or religious affiliation as well. But, given that Israelis, the vast majority of whom are Jewish, often face sharp criticism and negative press reaction over conflicts with their Arab neighbors – inflaming anti-Semitic sentiment – if an Israeli citizen who is non-Jewish is implicated in a violent crime, informing viewers that he is non-Jewish would seem to be in order.

But so far in the media coverage of serial stabber Elias Abuelazam’s arrest, some major news shows on both broadcast and news networks have avoided explicitly informing viewers that he is not a Jewish Israeli, while others have been more upfront with viewers on the subject. CNN’s The Situation Room, the NBC Nightly News, FNC’s Fox and Friends, and CBS’s The Early Show all have directly relayed to viewers at least once that Abuelazam is an Israeli Arab. But ABC’s World News, the CBS Evening News, FNC’s Fox Report, ABC’s Good Morning America, CNN’s American Morning and NBC’s Today show have all avoided such a direct identification of ethnicity.

A year ago today, when U.N. officials accused the Israeli military of killing the driver of a vehicle delivering relief aid to Gaza during the Israeli campaign against Hamas, all the broadcast and news networks reported the accusation on January 8, 2009, noting the U.N.'s resulting cessation of relief aid deliveries. But, after the Israeli military conducted an investigation and charged that Hamas was responsible for the killing, very few of the shows that reported the initial charges by the U.N. updated viewers on this important development. An examination of the morning and evening newscasts on ABC, CBS, NBC, CNN, FNC, and PBS – including American Morning and The Situation Room on CNN; as well as Fox and Friends, the Fox Report, and Special Report with Bret Baier on FNC; and PBS's NewsHour – between January 8 and January 12, 2009, found that all these shows – with the exception of ABC’s Good Morning America – reported on the truck driver’s death at least once, with nearly all shows also directly relaying the U.N.’s charge of Israeli military culpability.

But only CNN's The Situation Room, on the January 9 show, took the time to briefly inform viewers that the Israeli military had denied responsibility for the incident as correspondent Nic Robertson related: "[The U.N.] said that two of their workers were killed by Israeli tank and machine gun fire. Israeli Defense Forces say they have investigated it. Now, they say it wasn't them, which implies that it must have been Hamas."

For CBS News viewers following the first week of the Israeli military’s war against Hamas in Gaza, which news shows began reporting the morning of Saturday, December 27, 2008, one could easily have gotten the impression that Israel was starving the people of Gaza by barring food entry as part of its blockade, as the network’s newscasts – The Early Show and the CBS Evening News – not only ignored news of aid shipments being allowed to cross Israel’s border into the Gaza Strip – which did receive a little attention from evening and morning newscasts on the other broadcast and news networks – 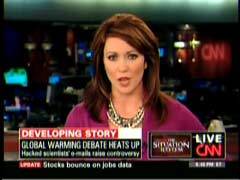 By Ken Shepherd | August 18, 2009 3:11 PM EDT
According to the mainstream media, carrying a gun to a protest is just plain crazy, even if perfectly legal.

By Brad Wilmouth | July 6, 2009 2:12 PM EDT
As the broadcast network evening newscasts on Friday reported on Sarah Palin's decision to resign as Alaska's Governor, they gave little attention to the toll taken on the Governor by the onslaught of frivolous lawsuits from her political enemies. But, by contrast, FNC gave much of the credit for Palin's decision to these lawsuits that have tied up the Governor's time and forced her family to spend a fortune in legal expenses.

On Friday's Fox Report, FNC correspondent Carl Cameron informed viewers: "Those ethics complaints have all been dropped or dismissed, and yet they've taken a toll and she acknowledged as much earlier." Then came a soundbite of Palin from her news conference, which was partially played on the CBS Evening News but not on ABC or NBC. Palin:

Todd and I, we’re looking at more than half a million dollars in legal bills just in order to set the record straight. And what about the people who offer up these silly accusations? It doesn't cost them a dime. ... My staff and I spend most of our days, we're dealing with this stuff instead of progressing our state now.