It seems that good news for President Donald Trump cannot be delivered by many liberal news outlets without putting a negative spin on it. Such was the case with Anthony Man of the Fort Lauderdale Sun-Sentinel who had to report on August 21 that Trump's approval rating is at it highest level which was immediately followed by a negative spin caveat.

During Wednesday’s Republican presidential debate on CNBC, Senator Marco Rubio (Fl.) excoriated the Florida newspaper The Sun-Sentinel and debate co-moderator Carl Quintanilla for raising questions about his young age and calls for him to resign from the Senate due to missed votes as examples of “a double standard” and “bias that exists in the American media today.”

'Where the Boys Are' Disproves Rising Seas Scare

"Where the Boys Are" is not only an entertaining 1960 movie about Spring Break in Fort Lauderdale as well as a catchy Connie Francis song but it now appears to be one of the best inadvertent presentations of why the sea level in South Florida has not risen for over fifty years. The opening credits of the film shows us an aerial shot of Fort Lauderdale beach and in relation to State Road A1A the beach is exactly as wide now as it was in 1960. Therefore no noticeable sea level rise despite the fearmongering by the usual suspects.

Let’s look at the way the print media reacted to Pope Benedict XVI and Pope Francis after their first six months as pontiff.

We looked at the editorials in 15 of the nation’s largest newspapers to see what they said about the current pope, and his predecessor, after their first six months in office (Pope Francis will celebrate his first six months on September 13).

A little thin-skinned, aren't we?

One thing the press can't stand is criticism. And sometimes the reaction of members of the press to criticism goes so over the top that the results are absolutely hilarious. Such was the case of Marci Shatzman, a reporter for the Fort Lauderdale Sun-Sentinel Forum Publishing Group who was covering a routine meeting of the West Boca Community Council in Florida. What set Marci off to act completely unprofessional at the 43 second mark of this video was guest speaker Andre Fladell daring to criticize  members of the press for acting...unprofessional.

It's time once again to play America's favorite political game...Name That Party!

This time the Fort Lauderdale Sun-Sentinel really had me stumped. It was their story about a former Broward (county) Teachers Union president who was arrested for stealing hundreds of thousands of dollars in union funds. What kept me scratching my head was that the Sun-Sentinel reporters wrote that some of the funds went to political campaigns but made no mention of the political party of the recipients. Here is the lead of the story that offered no real clues as to the political party:

Such is the premise, chock full of laughable hysteria mixed in with premonitions of massive governmental spending based on a theory yet to be proven, in this Fort Lauderdale Sun-Sentinel front page story by David Fleshler. As Chicken Little Fleshler describes, the plan to combat an unproven problem isn't just any plan, it's a BATTLE plan:

What happens when a mainstream newspaper gets too cozy with local politicians? In the case of the Fort Lauderdale Sun-Sentinel they often have to play catchup with the free alternative weekly, the Broward Palm Beach New Times, when it comes to exposing the foibles of those same politicians such as happened when the New Times' Bob Norman led the way with his stories about Broward School Board corruption to the tune of hundreds of millions of dollars. And once again Bob Norman is leading the way (although he sometimes goes off the deep end when discussing national politics) in his New Times Daily Pulp blog with a special series of articles exposing the amazing activities of Broward County Democrat Chairman, Mitch Ceasar, including allegations of corruption, vote tamperiing, and "wandering fingers." I'm sure you want to start off with the incredibly juicy details of the latter so check these claims in Norman's story made by Donna Greenburg, former executive director of the Broward Democrats:

"He's very predictable," Greenberg, who was married, says of her former boss. "He would walk over, shut the blinds in his office, and close the door. Then he would come over, say 'You look tense,' and massage my neck. It was so weird. I was freaking out. I was like, 'What do I do?'"

It only got worse the one time that party business caused her to have to go to Ceasar's house in Plantation. She was there to collect photographs that were to be posted on the Broward Democratic Executive Committee website.

"He totally came onto me and tried to get me in bed," she said. 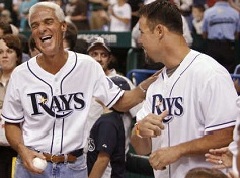 You might as well play the theme music of Love Is A Many Splendored Thing while reading this Michael Mayo column in the Fort Lauderdale Sun-Sentinel about Florida Governor Charlie Crist. With the senate campaign of apparent Democrat nominee Kendrick Meek seemingly dead in the water before it even really begins, Crist has now become the favorite of liberals whose main goal is to prevent conservative Marco Rubio from becoming senator from the Sunshine State.

Even though Mayo spent time cozying up to Crist, not a single penetrating question from him. Not even the obvious ones like why he lied on national television when he swore that he would NOT run as an independent as well as breaking his promise to return Republican campaign contributions when he made the switch. Mayo oozes unskeptical affection for Crist while in his presence with nary an uncomfortable inquiry:

I've got a new nickname for Charlie Crist — Governor Gamble — although I didn't share it with him when he gave me a lift the other day.

"Hop in," Crist said, waving me and a colleague into a Black Chevy Tahoe on his way to a bill-signing ceremony in Fort Lauderdale. "You [the taxpayers] pay for it. You might as well use it."

This was Crist at his affable best. Likability is what he's banking on to capture a U.S. Senate seat as an independent after his bold break from the Republican Party.

Okay boys and girls. It's time again to play that favorite NewsBusters game...Name That Party!

Today's game is a real challenge. The politician in question was a Broward County Commissioner sentenced to prison for money laundering. Hmmm... Broward County? Could the clue as to the party label be found from that fact? Nope. Too tough. The Fort Lauderdale Sun-Sentinel does us no favors by completely avoiding political labels in its story about former Broward County Comissioner Josephus Eggelletion on his way to prison:

Former Broward Commissioner Josephus Eggelletion turned himself in around 2 p.m. Friday and began serving his 2-1/2-year federal prison sentence, according to the federal Bureau of Prisons.

Eggelletion, 61, of Lauderdale Lakes, checked in at the Federal Correctional Institution in Jesup, Ga., 100 miles from Jacksonville.

Sun-Sentinel Columnist Urges Charlie Crist to Run for Senate as Independent...So He Could Be Bribed 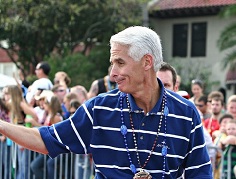 Whenever a liberal columnist gives some "friendly" advice to a Republican who is running for public office, you can be sure that he almost always has an ulterior motive. Such was the case with columnist Michael Mayo of the ailing Fort Lauderdale Sun-Sentinel. Not only did Mayo urge Charlie Crist to run for the U.S. Senate as an independent, he also cynically advised Crist to open himself up for bribery ala Ben Nelson should this year's elections result in a deadlock between Republicans and Democrats:

Democrats now have a 57-41 edge over Republicans in the Senate, and there are two independents who align with the Democrats, Joe Lieberman of Connecticut and Bernie Sanders of Vermont.

With 36 Senate seats up for grabs in November, Democrats and Republicans could end up virtually deadlocked for the majority.

Could you imagine if there was a 49-48 split and Crist were one of three independents?

Anything Florida wanted, Florida would get.

How about this idea: Our junior senator could broker a deal where all Florida homeowners get affordable windstorm coverage through national catastrophe insurance. In exchange, we allow expanded oil drilling off Florida's shores.

I say go for it, Independent Charlie.

For Floridians, it could have a nice ring — and ka-ching — to it.

There is currently a huge corruption scandal involving public officials in Broward County Florida that is being investigated by the FBI. The local Fort Lauderdale Sun-Sentinel newspaper, which has been dragging its feet until recently on reporting this scandal, has finally gotten around to criticizing someone involved in the scandal investigation...the informant who helped break the case. I kid you not.

First let us look at the background on the Sun-Sentinel's reluctance to do what it is supposed to do, namely investigating local corruption. The reporter who has actually been writing about the breaking scandals in depth for weeks doesn't even work for the Sun-Sentinel. He is Bob Norman of the Broward Palm Beach New Times free newspaper who describes the Sun-Sentinel foot-dragging in his Daily Pulp blog:

One of the great joys of watching the greatest corruption story in Broward County history begin to unfold during this past month has been watching the Sun-Sentinel play catch-up.

...The Sentinel, you have to understand, is what I call an "official" newspaper. In general, it listens to local bigwigs and does what it's told, paying short shrift to those who would challenge those same officials. Yes, it's the exact opposite of what a good newspaper is supposed to do, but it paid the bills for years and years.