MSNBC's Dylan Ratigan Snickers Over Perry's Coyote Kill: Kind of Like 'Shooting a Moose in Alaska'

MSNBC's Dylan Ratigan on Wednesday chuckled over the assertion by Rick Perry that he killed a coyote while jogging, misrepresenting what happened. After explaining that the Texas Governor shot the creature for menacing his dog, Ratigan intoned, "For the record, the Texas Wildlife Commission does not allow laser sited guns to be used in hunting as it is seen as cowardly, too easy, with a laser site, to shoot anything." [Audio available here.]

He then snidely added, "Though, this is said to be self-defense. Perry probably gets off. Although hunting coyotes with a laser sited gun is kind of like shooting a cow on the farm or maybe a moose in Alaska." First off, as Ratigan (sort of) explained, the Governor wasn't hunting. 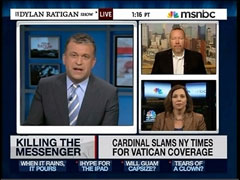 On Thursday's Dylan Ratigan Show on MSNBC, host Dylan Ratigan went after the Vatican for criticizing the slanted New York Times reporting on the priest sex abuse scandal: "Blame the messenger. The Vatican blasting the New York Times for telling the truth about Church – the Church and its harboring of sex abusers. It's the paper's fault."

Ratigan spoke with Democratic strategist Steve Hildebrand, an openly gay ex-Catholic, who ranted: "the bottom line is, the Catholic Church for the last couple of decades, has preached hatred, bigotry, discrimination against gay people. But they don't take ownership of their own homosexual problems that exist and have existed for decades. And they need to stop blaming everybody else." An on-screen headline read: "Killing the Messenger; Cardinal Slams NY Times for Vatican Coverage."

Meanwhile, on Thursday's CBS Early Show, correspondent Mark Phillips declared: "The Church, though, has been more direct in its response to the stories being printed and broadcast of child abuse in its institutions. It's attacked the messenger." Phillips later concluded that "The Church is faced with making an argument that is very difficult, that it has changed from the bad old days, at the same time as evidence keeps coming out, showing just how bald those old days were." 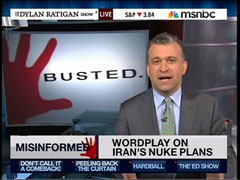 Near the end of Wednesday's Dylan Ratigan Show on MSNBC, host Dylan Ratigan led his 'Busted' segment by claiming that The Drudge Report did "not let facts get in the way of a good headline" on Tuesday, by featuring one which read: "CIA: Iran Moving Closer to Nuclear Weapon." Ratigan remarked: "That'll get the ratings up."

Despite the fact that most of the world has long operated under the assumption that Iran is pursuing nuclear weapons, including the Obama administration, Ratigan singled out Matt Drudge's website for scorn, arguing: "Sounds pretty scary, right? Until you find out what the CIA report actually said. The agency's intelligence actually shows that Iran is quote, 'keeping open the option to develop nuclear weapons,' but that they quote 'do not know' whether Tehran will ultimately head down that road." The headline on screen read: "Misinformed; Wordplay On Iran's Nuke Plans."

Ratigan eventually revealed where he received his liberal taking points: "the truth, why would you let that get in the way of ratings? As our friend Glenn Greenwald from Salon.com points out on his blog, false reporting on Iran could be ultimately be far more dangerous than the perceived threat itself. Let's try to stick to the facts."

MSNBC's Dylan Ratigan Rants Over Drilling: Is President Obama 'Nothing More Than a Democrat in Name Only?'

According to MSNBC's Dylan Ratigan, Barack Obama is nothing more than a shill for the Republican Party. The liberal anchor on Wednesday railed against the President's plan to allow limited offshore oil drilling: "This is a fraud...Is a pattern emerging? Is President Obama nothing more than a Democrat in name only? Dare we say it? A DINO?" [Audio available here.]

According to Ratigan, Obama, the same man who created a massive new entitlement with his health care bill, who ushered in the stimulus bill, is actually an operative for the GOP. He complained, "Look at the subsidization of the banking industry that goes on to this day or reports of the impending deal with the Republicans to forego civilian trials for Gitmo terror suspects in favor of military trials. Wasn't Gitmo supposed to be closed by now, anyway?"