"That's the silliest thing I've ever heard," former Reagan White House political director Frank Donatelli said of the claims. "It's an incomplete and distorted picture of everything," he added. Uygur is a host of "The Young Turks," a left-wing internet political podcast.

In fact, both his guests disagreed with him, but the liberal radio show host wouldn't budge.

MSNBC's Ratigan: American's Don't 'Give A Damn' About Iraq and Afghan Wars; Calls for Draft

On Thursday's The Dylan Ratigan Show, MSNBC host Dylan Ratigan went after the wars in Iraq and Afghanistan, and complained about the lack opposition to the conflicts: "Why isn't there an alarm that we've been perpetrating this war?...there aren't enough people in this country that honestly give a damn. No one really cares." His solution to the supposed apathy? A draft. [Audio available here]

Ratigan began his rant by describing the financial and human toll of the wars. He particularly highlighted "the innocent civilians that our bombs are killing. As many as 105,000 dead in Iraq, the number in Afghanistan approaching 13,000, that we have killed." He argued: "We might even be creating more terrorists....being there may be doing more harm than good." On his May 13 program, Ratigan condemned the U.S. military for "dropping predator bombs on civilians willy-nilly."

Describing the limited number of Americans who have loved ones on the front lines, Ratigan proclaimed: "...it's a way for the politicians to isolate on the poorest and the most isolated group of soldiers they can get and protect themselves from our society, were they to understand how violent and oppressive the actions we are taking against our own people are in perpetrating these wars." Ratigan then proposed: "...we have to raise the stakes on this to decide whether we get out or keep going. And the only way I can see to do that is to return the draft." He further declared: "Maybe if the sons and daughters of more Americans families, like those of our politicians, were either being killed in combat or facing the stresses of endless repeat deployment, our policymakers would start questioning why we're still there..."

Joe Scarborough on Monday continued to spin for Barack Obama, this time defending the President’s war strategy in Afghanistan and placing blame on the American people. Citing a New York Times columnist, the Morning Joe host complained, "And as Frank Rich said, the President's best political ally on Afghanistan is apathy. Americans don't care that their sons and daughters are going off to fight and die for a war that really has no end game."

Co-host Mika Brzezinski agreed. She derided, "Maybe if most Americans actually cared beyond the ones that have to go and serve we would have different outcomes.”

"We hear that we had the technology to stop this," Scarborough claimed. "In 2002, though, Dick Cheney and his energy task force said, 'No, we're not going to take an extra step.'"

Giuliani responded with an eviscerating counter punch: "It's important to know as part of the history of this but the reality is, he's been president now for 18 months. It's about time we stopped blaming Bush." 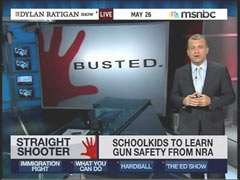 Virginia Gov. Bob McDonnell (R) is "missing the target when it comes to whose interests he's really looking out for" but "then again, that's nothing new for us, is it," MSNBC's Dylan Ratigan complained in the "Busted" segment of today's program.

Ratigan lamented that McDonnell stripped out the National Crime Prevention Council (NCPC) as an alternative organization that Old Dominion educators could select for gun safety instruction for elementary school students. As it stands now, the National Rifle Association's "Eddie Eagle" program is the only option public school teachers have under state law.

Perhaps Ratigan is unaware that the Eddie Eagle program "neither offers nor asks for any value judgment concerning firearms," it merely instructs children in four simple steps about what to do should they come across a gun: "Stop. Don't touch. Leave the area. Tell an adult."

By contrast, the NCPC has ideologically-colored aims in some of its gun safety materials for grade schoolers. Take this lesson plan for fourth and fifth graders, for example (emphasis mine), which uses the assassinations of Lincoln, Kennedy, and Martin Luther King Jr. as tokens to advance a loathing of guns themselves: 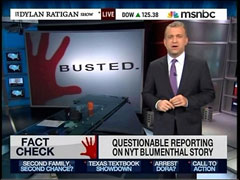 In the "Busted" segment at the end of Friday's The Dylan Ratigan Show on MSNBC, host Dylan Ratigan went after the New York Times for "accusing" Connecticut Attorney General and Democratic Senate candidate Richard Blumenthal of distorting his military record: "We think the Times should investigate some of its investigative reporting."

Ratigan dismissed a quote the Times used of Blumenthal referring to "the days that I served in Vietnam," claiming it was "only part of the story." Ratigan argued: "A longer clip from the same speech shows Blumenthal much more accurately describing his record." That longer clip included Blumenthal vaguely stating: "I really want to add my words of thanks as someone who served in the military during the Vietnam era in the Marine Corps." Hardly a statement that would have corrected the record for the audience.

Even so, Ratigan proclaimed: "This seems to support Blumenthal's explanation that he simply misspoke during that part of the speech, and on a few other occasions cited by the Times." Ratigan went on to declare: "Also undercutting the Times, word that Blumenthal's Senate rival, Linda McMahon, yes, from pro wrestling, admits that her campaign helped with The New York Times story, including gathering that evidence."

Captionfest: Has Bobby Jindal Had Some Work Done? 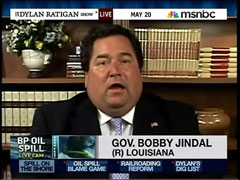 MSNBC's Dylan Ratigan on Wednesday became the latest host at that channel to lash out at Fox News. He frothed that Glenn Beck is a "scumbag" for touting the company Goldline. Ratigan also promoted an investigation by Democratic Congressman Anthony Weiner of the business.

He hyperbolically attacked, "The only problem here is that Glenn Beck and Goldline are largely snake oil salesmen and scumbags, trying to create money for themselves at the expense of everybody in this country." [Audio available here.]

Ratigan's over-the-top language continued as he ranted, "That man there [Beck] is paid by that other company to be a snake oil salesman at your expense. He's no better than the very politicians that he claims to be against." 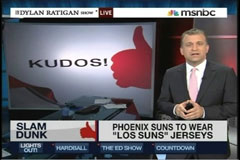 Ratigan enthused that congratulations were in order and added, "Around here we call that a slam dunk." The cable anchor quoted the team's owner playing up the move as one to honor Hispanics.

Clearly, however, there is a political angle. The same Robert Sarver also derided the legislation as "a flawed state law." Suns point guard Steve Nash attacked the bill as "very misguided, and unfortunately, to the detriment of our society and our civil liberties."

Near the top of Tuesday's Dylan Ratigan Show on MSNBC, host Dylan Ratigan fretted over American Muslims being harassed in the wake of the failed Times Square bombing: "how do you deal with these types of crimes without resulting in racism, effectively, towards people of Pakistani or Middle Eastern descent?...is there not a natural backlash to this?" [Audio available here]

Ratigan asked that of Sofian Zakkout, the director of the American Muslim Association of North America, who replied: "We should calm down, it's – thank God nobody got hurt. We all know – and also I spoke today, this morning, with CAIR and other Islamic organizations....we denounce what was going to happen." Zakkout's organization has had links to questionable Islamic organizations on its website and has voiced support for the terrorist organization Hamas.

Ratigan seemed to be following the lead of his MSNBC colleague Contessa Brewer, who appeared on Tuesday's Stephanie Miller radio show and lamented the ethnicity of the would-be bomber: "I get frustrated...There was part of me that was hoping this was not going to be anybody with ties to any kind of Islamic country."