By Matt Hadro | June 10, 2010 12:18 PM EDT
Jonathan Alter of Newsweek once again blamed Bush and the Republicans for creating the mess that Obama is now cleaning up, preventing the President from accomplishing his agendas.

Alter, appearing Wednesday on MSNBC’s “The Daily Rundown,” called the BP oil spill crisis “the perfect metaphor” for Obama’s presidency so far. “It’s been cleaning up a lot of the messes left to him by his predecessors,” he stated.

Alter added that Obama is trying to stop an economic depression “that, you know, began to happen on George Bush’s watch.”

“It is a distraction from Obama’s own agenda,” Alter added about the oil spill, “and in that sense, it irritates him.”

MSNBC’s Andrea Mitchell, Chuck Todd, and Savannah Guthrie on Tuesday’s “The Daily Rundown” were in “anguish” over the forced retirement of Helen Thomas, but showed little sympathy for the Israelis that the Hearst columnist so odiously disrespected.

“I think a lot of people feel some anguish about this because the comments were beyond the pale,” lamented Guthrie. “And yet it tarnishes a career that otherwise people would be celebrating because she was indeed a trailblazer.”

Glossing over the longtime reporter’s comments that Israelis should “get the hell out of Palestine” and go back to Germany or Poland, Mitchell lauded Thomas’s career as “storied” and proceeded to hearken back to a time when Washington was an “all-male town” and Thomas was blazing the trail for women.

“When I first arrived here, after dinner, at political dinners, women went to one room, men went to another to smoke cigars and have brandy,” recalled Mitchell. “This was a very traditional place–not like New York or other East Coast cities.”

In an attempt to make excuses for Thomas while appearing to condemn her remarks, contradictions ran rampant. First up, Mitchell:

By Matt Hadro | June 4, 2010 6:09 PM EDT
Chuck Todd “hated” to say it but just had to get it out anyway–would the BP oil spill, arguably the greatest environmental disaster in U.S. history, be a “missed opportunity” for Congress to capitalize on “disaster” to enact energy legislation should it fail to do anything in its wake?

Discussing what the reaction of Congress and the Obama administration should be to the spill during an interview with Tom Daschle on MSNBC's June 4 “Daily Rundown,” Todd asked:

So if energy legislation isn’t taken up and dealt with, this would basically be–I hate to put it this way–a wasted disaster?

MSNBC's Chuck Todd on Tuesday attacked new standards being adopted for history textbooks in Texas as "odd" and mocked that the state would now be teaching "education by Wikipedia." Evan Smith of the Texas Tribune appeared as a guest and fretted that the school board includes "a conservative, arch conservative bloc."

Todd recounted the changes being made to the curriculum, including "the idea that our Founding Fathers may not have intended a separation of church and state...how government taxation and regulation can serve as restrictions to private enterprise."

Todd derided the story, saying, "...The more you look into it, the odder it gets." He noted that the rise of the conservatism in the '80s would be highlighted and later marveled, "So, is this, essentially, education by Wikipedia? I mean, because, Wikipedia is...when a majority, it seems, accept what the version of a story that might have happened?" [Audio available here.]

MSNBC's Savannah Guthrie Sympathizes With Michelle Obama: Did 'Ugly' Side of Health Care Make You Angry?

MSNBC's Savannah Guthrie on Thursday conducted a sycophantic interview with Michelle Obama, urging the First Lady to complain about the "uglier side" of the health care debate. The Daily Rundown co-host sympathetically asked, "There was a lot of vitriol, some pretty hateful things said. And I wondered what your feeling was about that?" [Audio available here.]

Guthrie continued, "Was it hard to stand by and listen to some of that?" Offering the First Lady another softball, she reiterated, "Hearing some of the uglier side of it, did that make you angry?"

The questions didn't get any tougher. Discussing Barack Obama's coming Supreme Court nomination, Guthrie prompted, "You're a Harvard-educated lawyer. Do you think there should be more gender balance, gender equity on the court?" Many of the queries were so vague as to barely qualify as questions: "Do you feel like you have to avoid controversy? Do you feel like you have to edit yourself?"

MSNBC host Dylan Ratigan on Monday eagerly attempted to convict Sean Hannity for the supposed misuse of funds by a pro-troop organization he supports, a claim already investigated and debunked. The anchor highlighted complaints against the Freedom Alliance group by the George Soros-backed Center for Responsibility and Ethics in Washington (CREW), but never identified their liberal tilt.

Ratigan promoted CREW's assertions that the Freedom Concerts, which the Fox News host promotes, aren't giving all the money they take in to scholarships for the families of fallen soldiers. He sneered, "Hey, what the heck? You come up with a good cause. Give ten or 15 percent away and keep the rest for yourself. What do I know?" Not much, apparently. The MSNBC anchor made almost no effort to offer Hannity's side of the story or that of the Freedom Alliance.

David Frum's website analyzed this controversy and found the charges to be bogus. But, Ratigan wasn't interested in this. Instead, he mocked, "Who knows what happens to the rest of [the money]? But, not going to the kids, apparently."

Fourth quarter GDP growth "beat expectations," exciting some journalists on Jan. 29. But a number of economists were downbeat.

The 5.7 percent growth for the last quarter of 2009 sparked media reactions on both MSNBC and CNN.

Savannah Guthrie declared on MSNBC's "Daily Rundown" that "If they could do a jig at the White House, they would." Joining that discussion, NBC's Chuck Todd asked, "So is the recession over?"

CNN business correspondent Christine Romans said that the fourth quarter growth, coupled with the third quarter growth "suggests it [the economy] is coming out of that horrible, horrible Great Recession."

Matthews on Mass. Election: People Are Averse To Obama's Program 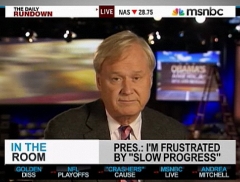 Barack Obama appears to no longer be giving Chris Matthews a tingle up his leg, for the MSNBC host thinks Tuesday's special election in Massachusetts might end up being a reflection of how people are very averse to the new President's program.

With a visible frown on his face, Matthews told "Daily Rundown" co-host Chuck Todd Monday that recent polling data "has to do with reality of a terrible economy, of this new burden that people feel being put on their shoulders of bigger debt, perhaps taxes coming down the road."

Matthews continued, "And the fear that the burden of healthcare is going to be much heavier than the benefit."

The "Hardball" host cautioned, "I think it's going to show up in Massachusetts tomorrow with the results there" (video embedded below the fold with partial transcript, h/t Story Balloon):

MSNBC’s Savannah Guthrie on Possible Dem Loss: ‘This Is Bad’

Perhaps providing a window into the mind of journalists, MSNBC’s Savannah Guthrie on Friday appeared shocked that a Democrat might lose in next week’s Massachusetts Senate election. "This is bad," fretted the Daily Rundown co-host. [Audio available here.]