On Wednesday night, Keith Olbermann, on his Countdown show on MSNBC, delivered his latest attack on Rush Limbaugh, indirectly implying that Limbaugh is a "rude, vile pig." This latest insult came as Olbermann introduced an update on Limbaugh's legal problems while transitioning from a story about entertainer Elton John in which Olbermann poked fun at a clip of John shouting the words "rude, vile pig" at paparazzi photographers.

Olbermann started his "Keeping Tabs" segment by relaying the story of Elton John's offer to perform a private concert for a substantial fee. He then played a clip of John shouting "rude, vile pig" at paparazzi members, and joked that the clip was a preview of one of John's songs. The Countdown host then flamboyantly pretended to be excited that this song might be played at the concert and, in an over-the-top manner, repeatedly shouted, "Rude, vile pig!" as he pumped his fists while the video screen beside him displayed a picture of Limbaugh. After quickly reassembling his composure, Olbermann immediately transitioned into an update on Limbaugh's legal problems by saying, "Which brings us to the latest on the Rush Limbaugh investigation."

On Wednesday night's Countdown, MSNBC's Keith Olbermann, one night after he scathingly attacked President Bush's handling of hurricane relief (see this Wednesday NewsBusters posting), made what seems to be a bizarre comparison between those who approve of Bush's handling of disaster relief and those who voted against Lincoln's re-election in 1864.

Olbermann relayed his belief that the current political climate was a "re-creation" of the "mindset of the national politics of the year 1864," the year when 45 percent of American voters voted for Democratic candidate George McClellan, "whose campaign platform consisted entirely of promising to immediately end the war, let the South secede, and let slavery continue there." Considering the recent criticisms made by some that President Bush was insensitive to hurricane victims trapped in New Orleans because most were black, Olbermann's choice of McClellan, a man who ran on a pro-slavery platform, suspiciously looks like an accusation that Bush's supporters similarly are insensitive to the black population, or, at least, are supporting a man who is just as obviously undeserving of support as McClellan was.

Olbermann then went on to recite Gallup poll results that shed light on whom the public blames for disaster relief problems, but excluded the finding that only 13 percent of those polled believe Bush was "most responsible for the problems in New Orleans after the hurricane." He instead distorted the results by combining those who blame Bush -- 13 percent -- and those who blame federal agencies -- 18 percent -- to say that 31 percent blame "the President or federal agencies."

By Brent Baker | September 7, 2005 5:45 PM EDT
Olbermann's arrogant hypocrisy. On Tuesday's Countdown, MSNBC's Keith Olbermann misidentified Tom DeLay as the House "Minority" Leader, an error for which he soon conceded that "I'd like to give you a good explanation for it, but there wasn't one. I just kicked it." But the night before, Olbermann had launched a five-minute diatribe which pegged great meaning to Secretary of Homeland Security Michael Chertoff's miscue that "Louisiana is a city that is largely underwater." Olbermann thundered: "Well, there's your problem right there. If ever a slip of the tongue defined a government's response to a crisis." Olbermann soon provided ridicule: "Anybody seen the Vice President lately, the man whose message this time last year was 'I will protect you, the other guy might let you die'? I don't know which 'we' Mr. Bush meant. For many of this country's citizens, the mantra has been, as we were taught in social studies it should always be, whether or not I voted for this President, he is still my President. I suspect anybody who had to give him that benefit of the doubt stopped doing so last week." Olbermann also suggested Bush looked "like a 21st century Marie Antoinette."

"As the 1960s protest song said, 'there's something happening here,'” NBC Nightly News anchor Brian Williams reminisced Thursday evening as he introduced an “In Depth” segment trumpeting the influence of Cindy Sheehan -- a story, when replayed on MSNBC's Countdown, fill-in host Amy Robach framed around how “there are those who wonder if attitudes toward the war could be reaching a tipping point and whether the Gold Star mom could be the driving force.” Reporter Carl Quintanilla allowed a couple of critics to denounce Sheehan, but his story was centered around touting her impact: “Sheehan, say some historians, may be evolving as an icon in the war's turning point, if this is one. For three weeks, she's dominated headlines, mobilized protesters” and made “it safe, her supporters say, to voice doubts about the war, just as Walter Cronkite did on the Evening News in 1968.” Viewers were then treated to 1968 video of Cronkite taking on the Vietnam war: “To say that we are mired in stalemate seems the only realistic, yet unsatisfactory, conclusion.”

In between soundbites from liberal historian Doris Kearns Goodwin, Quintanilla fretted about “a peace movement without a way home.” Goodwin rued: “That's the difficulty. We don't know what to do with the peace movement, what does it actually mean?” Quintanilla concluded by admiring Sheehan's influence, a pedestal the media provided: “Historians say we won't know Cindy Sheehan's place in the war until the war itself is history. And whether you agree with her or not, she sits waiting for one conversation, and has unleashed another.”
(Video: Windows Media Player or Real Media)

Full transcript, and Williams' plug on his blog for this story, follows.

Olbermann Targets Hume as “Worser” in “Worst Person in the World”

On his MSNBC Countdown show on Wednesday night, Keith Olbermann, who described the Fox News Channel as “just a brand name, not a description,” named FNC's Brit Hume his “runner-up” in his daily “Worst Person in the World” gimmick. What riled Olbermann? Hume daring to criticize as “'excessive' the TV coverage of Pat Robertson's call for the assassination of President Hugo Chavez of Venezuela because, he said, Robertson has 'no influence.'” Olbermann sarcastically added: “Probably why Fox has had Robertson on their network ten times in the last year.” By that reasoning, Olbermann would have to consider influential the parade of lawyers, family friends and other hangers-on brought out many times a day on FNC and MSNBC to talk about the Natalee Holloway case.

Links to Hume's original words and a full transcript of Olbermann's "worser” reasoning for Hume follows.

MSNBC's Keith Olbermann, on Friday night's Countdown, smeared the Media Research Center (MRC), the parent of NewsBusters, as “a scam” and claimed, in awarding MRC President Brent Bozell the “worser” slot in his nightly “worst person” gimmick, that “the only person distorting as usual is Bozell.” Olbermann was defending himself “against the charge of wacky guy” Bozell who “accused me of distortion for having said that Rush Limbaugh had said on air, quote, 'Cindy Sheehan is just Bill Burkett. Her story is nothing more than forged documents. There's nothing about it that's real.'” Olbermann proceeded to slam Limbaugh as the “Worst Person in the World” for supposedly denying the quote, alleging: "Like your career, Rush. You're finished, credibility spent."

While Olbermann zeroed in on Bozell, the MRC's critiques of him appeared in an August 18 NewsBusters posting (with video) that I wrote which was reprinted in the MRC's CyberAlert. I never suggested that Limbaugh did not utter the sentence sequence quoted by Olbermann, but that he distorted Limbaugh's point that the media see both Sheehan and Burkett as "an opportunity" to exploit and that "it doesn't matter what the specifics of Cindy Sheehan's case are." Olbermann had snidely claimed, "I guess she made up that dead-son-in-Iraq business" -- a ridiculous interpretation of some jumbled words. Video: Windows Media or RealPlayer. Full transcript follows:

How many candlelight vigils?

On Wednesday night, MSNBC's Keith Olbermann labeled Rush Limbaugh as the day's "Worst Person in the World!" in a segment that airs regularly on his 8pm EDT Countdown show. He normally introduces three nominees for the dishonor -- tagged as "worse," "worser," and "worst." Olbermann took Limbaugh out of context in highlighting the Limbaugh quote promoted by a far-left group: “Cindy Sheehan is just Bill Burkett. Her story is nothing more than forged documents. There's nothing about it that's real." Olbermann snidely quipped: "I guess she made up that dead-son-in-Iraq business." He also gratuitously speculated that "painkillers wipe out your memory along with your ethics." (Video available Windows Media or Real Media)

But on his radio show on Wednesday, Limbaugh had already discussed the fact that his comments had been taken out of context by others, explaining that the media see both Sheehan and Burkett as "an opportunity" to exploit and that "it doesn't matter what the specifics of Cindy Sheehan's case are."

Full CyberAlert item follows. For all the articles in today's MRC CyberAlert. 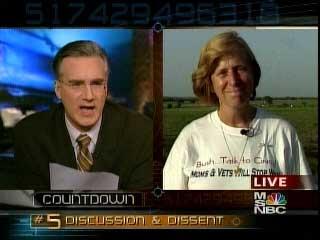 On Thursday night, Keith Olbermann interviewed anti-war activist Cindy Sheehan on his Countdown show. While he did at least ask her about reports that her attitude toward Bush had changed since her meeting with him last year, he also did not challenge inflammatory accusations she made against the President, such as accusing him of the premeditated murder of her son.

Keith Olbermann has the habit of taking gratuitous jabs at Fox News – which one can find in almost any type of story on his Countdown show – and so far, he's struck twice this week.