Earlier today I wondered if MSNBC.com was bored with the Fort Dix terror plot story.

Well, here's an update. It appears they still are.

As of 7:00 p.m. EDT tonight, both FoxNews.com and CNN give the Fort Dix terror plot story prime real estate. Not so for MSNBC. See MSNBC screencap below and check here and here for Fox and CNN screencaps respectively.

Did the Dow’s ‘Bull Run’ Milestone Get to Your Paper’s Front Page Today?

Front page? Heck, the overwhelming odds are that it didn't get mentioned anywhere.

It should have been.

At CNNMoney.com, writers Alexandra Twin and Steve Hargreaves appear to be the only ones who even recognized the significance of yesterday's positive market close (bolds are mine):

..... The Dow has now risen in 23 of the last 26 sessions, marking its longest bull run since the summer of 1927, when the indicator ended higher in 24 of 27 sessions, according to Dow Jones.

Turning the tables on John Kerry, and building on the snark of Matt at Weapons of Mass Discussion -- That would make it the best stock market run since, well, Herbert Hoover. 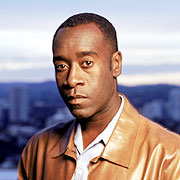 An April 4 CNN.com article helped peddle the recent “Not on Our Watch: The Mission to End Genocide in Darfur and Beyond,”  written by acclaimed “Hotel Rwanda” star Don Cheadle and former Clinton administration official John Prendergast, who is now a “human rights activist” and an advisor to the Soros-financed International Crisis Group.

In this Aspen Steib article, there is no mention of the 22-year civil war that devastated Southern Sudan when Arab Muslims targeted black Christians and Animists or the Bush administration’s efforts to end the wars in both Southern Sudan and Darfur. Cheadle’s intentions are probably good, but this article ignored many issues. Darfur’s crisis is complex, and this article’s approach had one note: it's Bush's fault.

Cheadle and Prendergast detail what they think what needs to be done (emphasis mine throughout):

"It is urgent that President Bush act ... to confront the Sudanese regime for the atrocities that it is committing and perpetuating to bring this genocide to an end once and for all," they write.

Are the media intentionally downplaying or ignoring reports that indicate a growing al Qaeda involvement in Iraq?

This was a compilation of a report that CNN’s Wolf Blitzer did earlier in the day on “The Situation Room.”

"Put in a tax to make it $4 a gallon right now," urged CNN contributor Allen Wastler on the April 28 "In the Money."

Wastler's motivation for higher taxes was to encourage alternatives to gasoline.

MSM, Dems Attack Giuliani For Something He Didn't Say 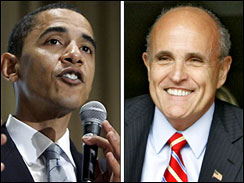 To show the feeding frenzy that is the MSM -- as well as the constant inaccuracy -- reports abounded yesterday with rebukes to Rudy Giuliani from Democratic candidates for the 2008 Presidential election over something they all merely assumed he said at a campaign appearance. 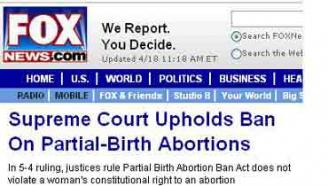 Earlier this morning the U.S. Supreme Court upheld a federal ban on partial-birth abortion. What's more, Justice Anthony Kennedy, whom many in the media often focus on as the "moderate" and "swing" justice on the Court, penned the majority opinion.

From a CNN e-mail I received shortly after the close of Friday's stock markets (this was the entire message):

Anyone reading this e-mail would have thought that this was a net ho-hum week on The Street. After all, the e-mail merely said that the week ended "higher."

Anatomy of an Impropriety, or Ann Coulter Vs. Bill Maher

The double standard of Leftists who are ignoring the outrage of Bill Maher -- who alluded to his wish that Vice President Dick Cheney was assassinated – while at the same time are wildly fanning themselves in mock outrage as if they had the vapors over Ann Coulter -- for calling Democrat John Edwards a bad name -- was on full display in the MSM over the weekend. Dead? CNNMoney.com Says New Home Sales May Be 'Back from the Dead'

Ya gotta love the twisted headline from this CNNMoney.com report by Chris Isidore (bolds are mine):

New homes sales: Back from the dead?
New home sales rise more than expected and prices post gains despite continued rise in completed new homes on the market.
December 27 2006: 11:11 AM EST

CNN Poll: All Americans Are Racists

For creating a story out of nothing and then finger pointing at US society and saying how evil it is, this Dec. 12th CNN story takes the cake. In "Poll: Most Americans see lingering racism -- in others", not only is a somewhat leading poll cited as evidence that America is still rife with racism, but CNN uses comments emailed to them by their viewers as some sort of follow up proof for it!