We’ve heard ad nauseam from a hopeful media -- Daniel Schorr of NPR, commentator Juan Williams and The New Republic among them -- that Obama will be a “post-racial” president. At least some of his supporters haven’t gotten the message.

Speaking from Utah, Lee was promoting his Jan. 19 “Inauguration Forum” at D.C.’s Howard University, when he  rhetorically asked anchor Fredricka Whitfield’s permission to call the capital Chocolate City. Whitfield is a Howard graduate.

Is it "wishful thinking" for Republicans to imagine that Obama will take Hillary as his running mate?  CNN's Ed Henry thinks so.  He made the comment to anchor Heidi Collins in a report on the veepstakes during CNN's 9 AM EDT hour today.

HEIDI COLLINS: Another name keeps bubbling up: Hillary Clinton.  Ed Henry is on the VP watch yet again today. Alright, so what do you think today, Ed?  Because I know yesterday it might have been different.

ED HENRY: Well it's interesting. You mentioned Hillary Clinton.  This name has been surfacing over the last 24 hours. Some Democrats, but frankly I've also heard it from some Republicans. Because they, strategists in both parties, are saying wait a second. We thought Barack Obama was going to roll this out a couple of days ago, maybe a little sooner.  Now it seems to be getting closer to the convention. Is it a surprise?  Is it someone with a lot of name ID?  Someone he doesn't need to spend a lot of time rolling out and introducing to the American people.  Frankly I think some Republicans are spreading this because it's some wishful thinking on their part.  Because they know she's also a lightning rod.  She did get 18 million votes in the primaries. She brings some real strengths to the table, but she also could really rally conservatives if she was on the ticket and could give conservatives sort of a spark to turn out for John McCain.  So there might be some wishful thinking there.  We have gotten no new reporting suggesting she's vaulted to the top of the short list.

My two cents say most Republicans want no part of Hillary on the ticket:

Instead of Fainting, Now They're Falling Asleep

Remember the good old days?  Back during the Dem primaries? When Barack Obama was such an electrifying orator that women were regularly fainting at his rallies?  Ah, how times have changed.  Instead of knocking them out with his other-worldly aura, Obama's now . . . putting them to sleep.

Check out the woman in the lower-right hand corner of the video to your right, from CNN today during a live broadcast of Obama on the stump in Virginia.  No, I didn't catch her in mid-blink.

As you'll see in the video, as Obama expounded on the horrors of the Bush economy, the woman falls into, then struggles out of, the arms of Morpheus.  (Watch video full-screen for best viewing.)

CNN's Velshi Says Fed is 'Late to the Party' on Economy

Investors and the business media are piling on the anti-Federal Reserve bandwagon after they cut the Fed funds rate only 25 basis points on December 11.

With President Bush presumably about to announce a surge of troops into Iraq, what better time for CNN to run a segment . . . likely to put a damper on recruiting? In theory, there was nothing wrong with a segment aired at 10:30 ET this morning, geared to providing useful information to potential recruits.

MRC Study: On Day Zarqawi Died, CNN And MSNBC Focused on The Negative

Now that times are difficult in Iraq, it’s easy for the media to claim they are simply reporting the bad news that is obvious to everyone. But how did networks such as CNN and MSNBC report more positive events? According to a new study by the MRC, overall, Fox News generated the most balanced coverage of news on the ground, while the other two cable networks consistently emphasized negative stories. FNC also displayed the highest enthusiasm on days such as June 8, when U.S. air strikes killed al-Qaeda in Iraq mastermind Abu Musab al-Zarqawi.

Over on MSNBC, while the anchors generally reported the event as good news, the network also chose that day to broadcast four stories on military deserters. On this seemingly happy occasion, CNN aired two reports on the already heavily hyped Haditha case.

Looking for a "passionate, compassionate, great, great" man? Well, according to CNN’s Kyra Phillips, they do indeed exist.

During CNN’s live coverage of President Bush’s remarks from New Orleans, Phillips was unaware that her microphone was on and picked up portions of a conversation she was having with another woman, apparently in a CNN restroom. At 12:49pm EDT, those listening carefully could hear Phillips praise her husband:

Phillips: "Yeah, I’m very lucky in that regard with my husband. My husband is handsome and he is genuinely a loving, you know, no ego–you know what I’m saying. Just a really passionate, compassionate great, great human being. And they exist. They do exist. They’re hard to find. Yup. But they are out there."

Phillips also inadvertently revealed how she feels about her sister-in-law:

Phillips: "..Brothers have to be, you know, protective. Except for mine. I’ve got to be protective of him...Yeah. He’s married, three kids, but his wife is just a control freak."

The full transcript is behind the cut [including one vulgarity]: 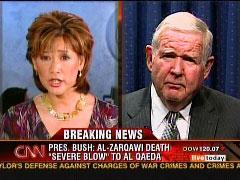 As has been documented at NewsBusters here, here, here and here, the predictable MSM response to the killing of Zarqawi has been to downplay its signficance. But there was one surprising bright spot late this morning. CNN host Carol Lin gave pull-out-now John Murtha a surprisingly rough run for his money.

A recent report  published by the Gallup Organization stated:

“a majority of U.S. investors continue to describe the current economy as being ‘in a slowdown’ or ‘recession’ as opposed to being ‘in a recovery’ or ‘sustained expansion.’”

Regardless of continuously strong economic reports, such bearish assessments have been regularly portrayed by public opinion polls for several years. During this period, economists and politicians – including the Bush administration – have wondered what is responsible for this disconnect between perception and reality.

A detailed look at how unemployment numbers are shared with the public by mainstream media outlets gives us some clues. The Labor Department on Friday announced very strong employment gains for the month of November. In fact, this was the largest number of job creations since April. However, this news was reported to the public in a fashion that largely downplayed its significance. A 3.2 percent annual increase in wages was characterized as employees “basically treading water.” Although energy prices have been steadily declining since September, jobs market stories included references of this still being a “huge concern.” Other news accounts referred to the unemployment rate being “stuck at 5 percent,” as if a 5 percent unemployment rate is a bad thing, while one cable news outlet told viewers to take the numbers “with a grain of salt.”

Don't miss my latest writing for the Free Market Project: Media claims about a “housing bubble” are nothing new. Since before the 9/11 terror attacks, the media have been calling the housing market a “bubble” while predicting an imminent, devastating decline. Not only have they been wrong in forecasting such a top, they have thoroughly mischaracterized what an investment bubble is. Now that the market for homes has finally slowed a bit, the media are declaring the bubble has burst.

As NewsBuster Dave Pierre reported here, the media are in a bit of a tizzy over remarks that former Education secretary Bill Bennett recently said on his radio talkshow about abortion and crime.  On CNN’s “Live Today,” commentator Daryn Kagan invited Rev. Al Sharpton to offer his views of Bennett’s comments:

SHARPTON: I think they're blatantly racist. I think that even after he had said to kill people based on who they are is morally irreprehensible -- he then came back and stated as a fact that, if you did do this, even if it was reprehensible, it would, in fact, lower the crime rate. Which clearly is he -- making blacks and crime synonymous. So I think even after he recovered, he re-emphasized the offensive point in first place. And he seems to be oblivious to what he has said out of his own mouth and then confirmed after he tried to clean it up.

What follows is a full transcript of Kagan’s report including the text of Bennett’s comments on the show in question as well as Sharpton’s remarks.  The video link gives an audio of Bennett’s radio comments.