Sen. Charles Schumer (D-NY) isn't alone in having trouble understanding how the government is organized.  In a Sunday article posted on the Chicago Sun-Times's Web site, staff reporter Mary Houlihan credits the late Sen. Joseph McCarthy (R-WI) with running the House Committee on Un-American Activities.  That would have been quite an accomplishment, given the fact McCarthy never served in the House of Representatives.

Houlihan writes of photographer Milton Rogovin, who died last month.  After military service during World War II, Rogovin "organized a chapter of the optometrists’ union and served as librarian for the Communist Party of Buffalo."

Then the inevitable happened. In October 1957, Rogovin was caught in the net cast by the House Un-American Activities Committee helmed by Sen. Joseph McCarthy. It was the waning days of the Communist witch hunt, and the experience would change Rogovin’s life.

Leave it up to the Chicago Sun Times editorial page to take opportunistic privileges with the Arizona Shooting tragedy and post a shamefully rambling and incoherent smear against the right.

With the claim that “we cannot walk away from this one” the newspaper rails against the tone of America’s political rhetoric, to end the fear-mongering and “quit the demonizing”. And then in an incredibly inane example of ideological laziness the editorial demonizes “the right” for the tragic shooting.

In the wake of a huge GOP midterm victory, pro-abortion women actively took to the social website Twitter to reject the incoming wave of pro-life candidates. Those who have had abortions spoke out on Twitter, proudly tweeting “#ihadanabortion.” From the Chicago Sun-Times, to The Washington Post, the media obliged these women and their left-wing social agenda by complaining conservatives wish to “scrub the ‘a-word’ of stigma and shame” and compare pro-abortion women to those fighting for civil rights.

When a “hashtag” (a pound sign) followed by a series of words is used on Twitter (for example - #ihadanabortion) an online community is created for those who are discussing a similar topic. According to the Post, on Nov. 5 the #ihadanabortion topic was among the top 10 most popular or “trending” topics on Twitter.

A Tale of Two 'Non-Payment' Reports

It must be hard for newspaper editors to pick and choose which candidates to report on in an election season when their endorsed candidates fall on the opposite side of issues that contradict the paper's endorsed claims. Case in point, given the choice of reporting about the numerous reports of Illinois not paying their obligations and that of a payment glitch concerning a leading Republican gubernatorial candidate which story do you think the Chicago Sun Times would choose?

If you picked the non-story hiding behind candidate R you would be correct.

Ebert: To Not Publicly Declare Obama Is Not a Muslim Is a 'Crime Against America' 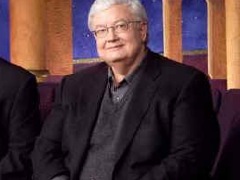 When you think of crimes against America, crimes so dangerous they strike out against the very existence of the country, what comes to mind?

Espionage, terrorism, and treason perhaps top the list. But what about not publicly declaring that Barack Obama is in fact not a Muslim?

Liberal Chicago Sun-Times film critic Roger "Save the Republic from Palin" Ebert made a federal case out of the latter in a September 1 blog post entitled "Put up or shut up" (emphasis mine):

Editor's Note: The following was originally published at the Big Hollywood blog on Sunday, May 9.

When the story broke involving five high school students sent home by school administrators for daring to wear the American flag on Cinco de Mayo, the once universally-beloved film critic Roger Ebert had a choice. He could either side with the students and school administrators repressing free speech or he could side with those having their speech repressed. Not surprisingly (he is a leftist, after all), Ebert sided with the repressors. Worse, with this Tweet, Ebert equated wearing the American flag as just as offensive as wearing the Soviet hammer & sickle.

Today, Ebert responds with the usual leftist refuge of last resort: How dare you question my patriotism!

Reporters noticed the extremist Nation of Islam leader Rev. Louis Farrakhan’s latest three-and-a-half hour jeremiad on Sunday, but some left the most extreme rhetoric out. Kim Janssen of the Chicago Sun-Times caught it:

Speaking to an estimated 20,000 followers of the black nationalist movement at the United Center on Sunday, the 76-year-old Farrakhan said, "The white right is trying to set Barack up to be assassinated."

Referring to a Southern Baptist preacher's recent prayer that the president die, Farrakhan said, "There are Christians praying for God to kill Obama."

But the AP dispatch (carried by CBSNews.com, Foxnews.com, and MSNBC.com) left out the assassination part:

"I’m reminded the term Teabaggers is pornographic. Didn’t know that until MSM told me. Let’s face it: The Baggers own it now." — The latest from Roger Ebert’s [depicted at left in 2003 file photo at right] Twitter, presumably in response to this.

Ebert’s seen a lot of films but obviously hasn’t learned very much from them. When he disappeared into the hospital for all those months, those of us who disagreed with his politics put those meaningless differences aside as we worried and prayed for the robust return of the thumb that had become such a part of our lives. But who would’ve guessed he wouldn’t come out of his near-death experience like the movies taught him to: as a kinder, more understanding, more tolerant and patient man with a new appreciation for the simple and human things in life? No, he went the opposite way and the story of Roger Ebert’s life will now look as though the projectionist got the reels for “Regarding Henry” confused.

It’s been extraordinary to watch this once  beloved critic squander all the universal affection and goodwill he had built up over a lifetime in just a few short months. And over nothing. No one bad-mouthed his mother or rang his doorbell and ran. We disagree on the size and scope of the federal government. We disagree over the idea that increased government control will improve our health care. We’re not as enamored as he is with the man currently occupying the Oval Office. Disagree, argue, that’s all fine. But he’s calling us “teabaggers,” and he knows full well what that means. And he’s calling us “teabaggers”  because he doesn’t have the guts to come right out and call us “c***suckers.”

In stories currently carrying Friday afternoon and early Saturday time stamps, the Associated Press weighed in with supportive articles about Illinois Democrats who are desperately trying to convince Scott Lee Cohen (pictured at right; image is captured from his web site), who won the party's nomination for Lieutenant Governor, to step aside.

In the Friday afternoon's report ("Embattled Dem Ill. candidate won't step down"), AP reporter Karen Hawkins swallowed the line that "details had emerged" about Cohen's 2005 arrest on domestic battery charges, despite the fact that Cohen himself preemptively disclosed many of those details to Chicago Sun-Times reporter Mark Brown in March 2009 (link is to a cached copy of Brown's article that was posted at Cohen's campaign site). Brown apparently chose not to relay much of what Cohen revealed, but he clearly had a lot of it.

In an early Saturday item ("IL Gov. might want to run from his running mate"), the wire service's Deanna Bellandi owned up to the existence of the Sun-Times story and relayed the demands of several Illinois Democrats that Cohen withdraw.

Each reporter seemed to go out of her way to avoid mentioning the remaining candidates for the Republican Party's gubernatorial nomination, Bill Brady and Kirk Dillard, who are currently locked in a razor-thin, currently undecided race. 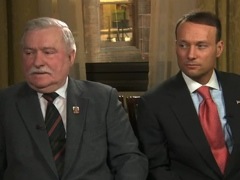 The gubernatorial race in Illinois is heating up. Conservative Republican candidate  Adam Andrzejewski has, according to some reports, surged from relative obscurity to within 2 points of the lead for the GOP nomination. And last week Andrzejewski was endorsed by Lech Walesa, recipient of the Nobel Peace Prize and the Presidential Medal of Freedom, and former President of Poland.

If you live in the Chicago area, however, may be unaware that such an important historical and political figure was just in your town, endorsing a candidate for governor of your state. The only local television coverage the endorsement event received was from Chicago's ABC News station, which showed Walesa and Andrzejewski on stage while covering a Tea Party rally at the event, but never even mentioned the former president by name (see video below the fold).

The only print coverage in local newspapers the event garnered was from the Tribune, which ran a 113-word AP story, and the Sun-Times, which mentioned Walesa in a 2-sentence caption, right below a blurb headlined "Family of boy found hanged sues schools" and above one headlined "New Schools Expo today". So the latter paper decided the death of a child in a local suburb was more important than a political endorsement from a man at least partially responsible for the fall of Communism in Eastern Europe. The former decided it couldn't spare a reporter for such a monumental figure (h/t Founding Bloggers and Race 4 2012).

Chicago Sun-Times's Mitchell: 'Things That Only Oprah and God Can Make Happen'

Mitchell's adulation for Oprah is shared by many in the mainstream media.  From early shows devoted to male-bashing through attacks on free enterprise and limited government to her campaigning for Barack Obama's election, Winfrey has burnished her liberal credentials.

In bracketing Oprah with God, however, I wonder why Mitchell didn't include Obama, as in "There are things that only Oprah and God and the Federal government under the unparalleled leadership of Barack Hussein Obama can make happen."

By Mike Sargent | November 12, 2009 4:31 PM EST
Former President Bill Clinton was in Chicago yesterday, speaking at a fundraiser on the subject of the current health insurance overhaul.

Somehow, some way, Clinton wound up talking about ethnic diversity, the Fort Hood murders, and – most bizarrely – the AMC network’s “Mad Men.”