Something tells me Karen Ogden doesn't have a future in health care reporting in any large mainstream media publication or network. In the July 23 edition of her paper, the Great Falls Tribune editor took a sobering look at painkiller addictions and the black market for the narcotics on American Indian reservations in Montana. "Free" socialized medicine and the long wait times for surgery were partly to blame, she found. :

A perfect storm of factors is feeding the pill problem: grinding poverty coupled with handsome prices for contraband pills (a methadone tablet sells for up to $20 on the Blackfeet Reservation), a long history of addiction in American Indian communities and the fact there is no charge for patient visits or prescriptions at IHS clinics.

Some allege that crushing workloads for IHS doctors and political pressure on physicians from tribal officials and relatives — a function of life in close-knit reservation communities — also are to blame.

Another culprit, they say, is a budget crisis within the IHS that is forcing patients nationwide to wait months and often years for hip replacements, knee repairs and other badly needed surgeries. 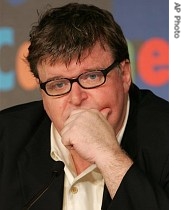 Canadians are mad as heck, and this time, they’re not going to take it. Michael Moore went too far to be ignored, which meant that a Canuck really gave him “what for” in the form of a polite but pointed recap of a heated press conference on Saturday for the premiere of “Sicko,” Moore’s one-sided US health-care hit job, which debuted at Cannes Film Festival .

May 20, Toronto Star entertainment reporter Peter Howell wrote in the ideologically left of center paper that the Canadian journalists who saw “Sicko” were less than happy with his “playing fast and loose with the facts” and churning out a one-sided Pollyanna treatment of Canadian health care, presenting a system without problems. After being chastised by some of the most polite people on Earth, he fired back and leveled a truly terrible offense at them by stating their system is barely a step above America's. Quelle horreur!

Read what one of the few articles critical of Moore and his accuracy had to say about the movie's obvious problems with Moore’s film (bold emphasis mine throughout):

Newsweek Reports Economic 'Vibrancy' In Iraq -- But Not for American Eyes

Some times, real surprises arrive in your e-mail, such as: Newsweek's International Edition welcomed the New Year with an article titled "Iraq's Economy Is Booming." Nobody noticed this "mother of all surprises" in America, since the article wasn't placed in front of domestic customers (it is online). Why not? Liberal, Bush-hating politics, perhaps?

A Conspiracy Theory the Media Can Tolerate

While ABC came under assault from the left in this country for even thinking to air something critical of the Clinton administration's role in the leadup to 9/11, Canada's leading broadcast network was doing the very opposite: airing a "documentary" exploring the idea that the Bush White House was behind the attacks that killed thousands of Americans (often called MIHOP in leftie circles):

On the eve of the 9/11 remembrance ceremonies, the leftist, anti-Bush Canadian Broadcasting Corporation, Canada’s national public broadcaster, aired an outrageous and disgraceful documentary on a Sunday news program regarding half-baked 9/11 conspiracy theories that only served to insult the memories of those who perished that tragic day.

Titled 9/11: Truth, Lies and Conspiracy, the only fascinating thing about the CBC show was its complete absurdity and the fact that it actually made it to air.On the conspiracy side, it featured a young, budding “film-maker” whose online documentary portrays the destruction of the World Trade Center towers as the result of a bomb in the basement, demolition explosives planted beforehand throughout the buildings, and the airliner crash, which, it claims, was not enough in itself to topple the towers. According to this masterpiece of misleading fiction, the Pentagon was also hit by a missile, not by an airplane; and the passengers of United 93 didn’t crash into a Pennsylvania field, but disembarked at an airport.

As badly as the American press leans leftward, the Canadian press is actually worse in its bias against things conservative. That's ironic since Canada's prime minister, Stephen Harper, is actually a conservative which has caused a good amount of friction with intolerant liberals up north.

Facing an entire press corps as impartial as Keith Olbermann, Harper has had no choice but to play tough with reporters who despise him, snubbing their little award ceremonies, and denouncing their desire to pontificate at news conferences. "They don't ask questions at my press conferences," he said in May.

The Grits' (Liberal) press arm retaliated, launching a boycott of his news conferences. Being reporters, though, their staying power was rather limited (h/t Small Dead Animals):

With a whimper it was over.

As of today, The Parliamentary Press Gallery has called off its five-month-old boycott of Prime Minister Stephen Harper's news conferences.

Officially, its only a temporary suspension of the boycott to let Harper think about the error of his ways and to reach a new protocol for holding press conferences. But the PPG members know the jig's up.

By Warner Todd Huston | July 26, 2006 8:04 PM EDT
According to Major General Lewis MacKenzie, Canadian Army, retired, one of the Canadian soldiers killed by Israeli bombs in Lebanon had written emails home complaining that Hizbullah terrorists were using his UN post as a shield, expecting that Israel wouldn't target them if they were close to the UN post.

IMRA.org has posted the following citation from a broadcast on July 26th on the CBC Radio, Toronto.

Taking on the Media, Canadian Style

By Greg Sheffield | July 6, 2006 12:01 PM EDT
Canadian Prime Minister Stephen Harper has been waging a one-man battle against Canada's newspapers, knowing that regardless of what he tells them during press conferences, they'll spin his words into their own liberal prism and diminish any of his efforts to make a case.

Guy Giorno was the chief of staff when conservative Michael Harris was Ontario premier (Harris resigned in 2002). He has engaged in his own fight with the Toronto Star, and won.

By Greg Sheffield | June 16, 2006 11:15 AM EDT
Rachel Marsden writes at Front Page Magazine that ever since news of terrorist plots in Canada came out, "Canadian journalists have been busy spitballing accusations of ethnic insensitivity at each other."

'They Don't Ask Questions at My Press Conferences'

Stephen Harper, Canada's Conservative prime minister, has stepped up his criticism of that country's elite media, stating flatly that they're dominated by left-wingers and he won't have anything to do with them:

Prime Minister Stephen Harper says the national media are biased against him so he will avoid them from now on.

The prime minister says the Ottawa press gallery seems to have decided to become the opposition to his Conservative government.

Can Canada's Harper Teach Bush a Lesson in Media Relations?

Most Americans don't care one whit about news from Canada, often justifiably so. I think at least some Americans, namely the press folk in the Bush White House, are keeping an eye on how Stephen Harper, the new Conservative prime minister (whose party is in power after decades of Liberal dominance) is taking no prisoners when it comes to dealing with a press that is actually further left-biased than the one in this country.

There are two effective ways of dealing with the press, neither of which has been pursued by the Bush White House up until new press secretary Tony Snow started practicing the genial-but-tough tactic.

One gets the impression that Harper and his staff are pursuing the "bad cop" route, based on the conclusion that making nice with journalists who despise you, your party, and your policies, doesn't do much good.

A small-time member of Canada's parliament made headlines today by sending out and later retracting a column which called for jail time for reporters who "fabricate stories, or twist information and even falsely accuse citizens."

Colin Mayes, a Conservative from British Columbia, issued his remarks in a column sent out to newspapers in his district.