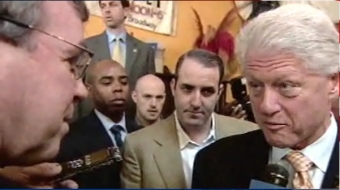 Planned Parenthood Golden Gate (PPGG) has unveiled what it calls an “edgy” TV and radio campaign that “focuses on the importance of practicing pregnancy prevention and safer sex.”

Except that the words “pregnancy” and “safe sex” are never spoken.  And the pitch man in the “Mile High campaign” is flamingly gay. The TV ad is being run on MTV, VH-1, Comedy Central and TLC, and the radio ad is running on KMEL-FM, a station.  See if you can find the purported "sexual health" education messages in the ad.

Here is the text of the commercial: (click here to see the video)

A hard-hitting subscription-only editorial in the Wall Street Journal today needs some reinforcement.

That's because Californians relying on Old Media for their news about the Golden State's dire financial situation are being conditioned to believe that only a tax increase will solve the state's problems.

The latest offering in that regard is a Field poll covered at the San Jose Mercury News and the San Francisco Chronicle, headlined "Many voters think deficit fix will require higher taxes" and "Voters resigned to higher taxes to solve budget crisis," respectively. Those headlines conveniently obscure the fact that the margin of those believing that tax increases are necessary vs. those who think that the answer is totally in spending cuts is only 48%-43%.

Here is some of what the Journal had to say:

Barely four years after California's historic recall of sitting Governor Gray Davis and Arnold Schwarzenegger's landslide election to replace him, the Golden State is, again, in a budget crunch of its own making.

Oh, it's not as bad as the Gray days -- yet. The $35 billion budget deficit Davis papered over long enough to win reelection in 2002 over Bill Simon, with the help of the state's ignorant and non-inquisitive news media, is 2-1/2 times higher than the $14 billion gap the state is facing over the next 18 months.

The state's Old Media, as would be expected, is moaning about cuts that might have to be made, obsessing over the possibility that "universal health care" might be derailed, and of course giving visibility to anyone and everyone who thinks even more taxes will solve the problem.

As has been the case for well over a decade, nobody that I know of in California's Old Media is considering the idea that the state is paying the price for failing to sufficiently go along with the rest of the country in aggressively reducing welfare rolls. But the numbers support the idea that if the state had done what the rest of the country has "somehow" done without visible suffering, it would be in a much better situation.

(A table and graphs illustrating the situation are after the jump.)

When California Gov. Arnold Schwarzenegger signed two bills on Oct. 12 that essentially turn the state's public schools over to homosexual and transgender activists, there was virtually no media coverage outside California. There still isn't.

Beginning in January 2008, California public schools must teach children as young as 3 to 5 years old that homosexuality is a normal, healthy lifestyle and that kids can choose their "gender." This means banning the terms "husband" and "wife" for the more progressively inclusive term "partner." "Moms" and "dads" will morph into sexually neutral "parents." Textbooks will be rewritten to blot out any reminder of married-couple-led families as a social norm. Gender-confused kids will get to use the restrooms of their choice. Any expression of negativity toward deviant sexuality will be punished as "bigotry." The coming changes are so radical that they produce gasps or professions of disbelief from people who hear about it from sources outside the mainstream media.

Bruce Shortt, an advocate of private schooling who writes a periodic report called "the Continuing Collapse" about problems in government schools, provides this analysis:

So far, the media have maintained a near total news blackout on this development.

A recent article [at Medill Reports online] on homosexual gains in the schools reflects how the advocates of legislation to mainstream deviant lifestyles plan to respond to queries from naive or fellow travelling reporters:

The Contra Costa Times has given us an interesting new angle to fool the voters into voting for a new gasoline tax in an article titled, "Calling gas tax a 'fee' may help at ballot." In an opinion laced article, the CCTimes is advising politicians to call the tax hike a "fee" instead of a tax to fool the voters into accepting it at the ballot box.

It appears that Editor & Publisher felt the need to get in front of some really bad news in the newspaper business.

Orange County Sheriff Mike Carona was indicted "on federal corruption charges stemming from a lengthy investigation into allegations that he had misused his office for financial gain," the Los Angeles Times reported on October 30. Reporters Christine Hanley, H.G. Reza and Paul Pringle noted that Carona was once considered a "rising star" for the GOP.

It's a fair point to make note of Carona's party affiliation, but the Times unevenly applies party labels when it comes to elected officials' scandals.

Back in 2006, Harris Interactive released poll results that indicate the military is the most trusted institution in America, with 47% saying they have a "great deal" of confidence in the military.

We'll have to keep Patterico in mind for hosting duties if we ever decide to throw a NewsBusters game show (although be warned, we're fiscally conservative, so the prize would probably be a cheap Rosie O'Donnell doll).

The blogger unveils the latest round of a game he likes to call "Spot the L.A. Times Article!":

Considering the mainstream media's penchant for highlighting negative aspects of our involvement in Iraq and for shining a positive light on anyone who protests the war in any way, how is it we didn't hear about this guy? (hat tip: Moonbattery)