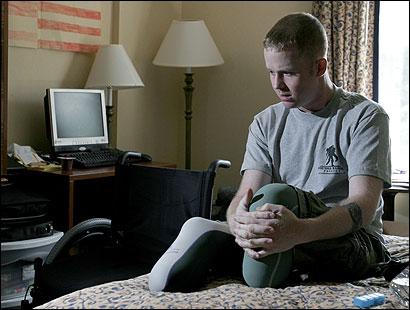 On August 2, the Boston Globe ran an article about a soldier who lost both legs in Iraq. Reporter Brian MacQuarrie tried to paint Sgt. Brian Fountaine as anti-war, even having the heart-wrenching article title, "A Soldier Maimed by War Now Questions the Mission."

President Bush came and sat by the side of Sergeant Brian Fountaine, a 24-year-old tank commander from Dorchester, a gung-ho soldier who had lobbied to be deployed a second time. Now Fountaine was among the wounded at Walter Reed Army Medical Center, his legs amputated below the knees after an explosion June 8 ripped apart the Humvee in which he was riding.

The president chatted about the sergeant's beloved Red Sox, but made no reference to the war, the soldier said.

If the topic had come up, the president might not have liked what Fountaine had on his mind. In a dramatic change of heart, Fountaine now considers the war a military quagmire in which American soldiers are caught in a deadly vise between irreconcilable enemies.

Last week, I mentioned to Michelle Malkin that it was weird that several networks only made a one-day story out of a Muslim shooting up a Jewish community center in Seattle, killing one woman and wounding five, while Mel Gibson's drunken rant was the story that couldn't end. Boston Globe columnist Jeff Jacoby did a little counting in Nexis and found the disparity was vast and wide between Gibson's drunk-driving arrest and Naveed Haq's murdering rampage:

Ashamed of their sins at Hiroshima and Nagasaki, Americans were actually awaiting payback along the lines of 9/11. You say you were unaware of any such feelings? That's only because your feeling was 'subliminal.' Your shame was 'unconscious.' Well, that, or the fact that you just don't have the same exquisitely refined sensibilities of Boston Globe columnist James Carroll.

Amongst Derrick Z. Jackson's many fulminations in his Boston Globe column of this morning, The Divide Remains, this one leapt out at me: "the great gorge between the working poor and the wasteful rich remains far from being bridged."

It's become a punchline:  Sure, Fidel forces champions of democracy to rot in prison.  Yes, his kleptocracy-called-communism has empoverished the masses while enriching the elite. OK, he did permit the Soviets to install nuclear weapons pointed at us.  But -  altogether now - THEY HAVE FREE HEALTHCARE IN CUBA!

When the Allies faced fascist foes in WWII, they called for unconditional surrender. Confronted today by the new face of facism, the Boston Globe calls for 'unconditional, immediate cease-fire.'

Globe: What, No Tuition Subsidies or English Classes for Illegals?

The bleeding heart of the Boston Globe is on vivid display in its editorial of this morning, Boa Vinda a Framingham! The focus is massive illegal Brazilian immigration that has tranformed the city of Framingham, MA. Annotated excerpts:

The unborn children of teenage mothers who don't want them are better off dead. I don't see any other way to intepret the Boston Globe's editorial of this morning Pregnant and Frightened. The editorial was prompted by a recently-passed Senate bill prohibiting the transport of minors across state lines for purposes of an abortion in violation of parental consent or notification laws.

In the course of condemning the legislation, the Globe wrote:

"It is hard to see how forcing a frightened 15-year-old to carry an unwanted pregnancy to term will improve the life of the teen or her child."

Bill O'Reilly's down to his last strike. As noted here, on his radio and TV shows yesterday, Bill propounded the theory that the big-city newspapers have tread lightly in the current Middle East conflict for fear of alienating their liberal Jewish readers. As Bill put it, liberal Jews "are all the papers have left" when it comes to significant market niches.

O'Reilly: Liberal Jews Are All Big-City Newspapers Have Left

Bill O'Reilly got his show off to a surprising start this afternoon, with a novel theory as to why the big-city newspapers have tread lightly in criticizing Israel for its role in the current conflict. During his opening monologue O'Reilly theorized that the papers are fearful of turning off liberal Jewish readers.

Complete this sentence: The American Dream is the notion that all Americans, regardless of race, country of origin or obstacles to overcome can succeed, providing they . . .

I'm guessing that for most people, the answer is along the lines "work hard."

Even for a Boston Globe columnist, Robert Kuttner's effort this morning has to go down in the annals of Bush-hatred at its most rabid. Consider these excerpts, annotated with my comments: