**UPDATE** At 2:30 p.m. EDT, MSNBC mentioned the damaging emails for the first time, coupling it with breaking news of an arrest in the attack on our Libyan consulate.

Following in the footsteps of its sister broadcast network, MSNBC has continued to ignore the shocking revelation that the White House knew on September 11 that the U.S. consulate in Benghazi was under a well-coordinated terrorist attack.

As NewsBusters’ Matthew Balan noted, NBC's Today was the only broadcast network morning show this to ignore the story altogether, with MSNBC following suit by remaining silent as well throughout the day.  In contrast, both Fox News and CNN have run numerous stories Wednesday morning.

Fox News has canceled its long-running show "The Big Story:"

Fox News Channel, tinkering for the first time in eight years with its popular early evening lineup, is replacing its 5 p.m. news broadcast, "The Big Story," with an election-theme program for the foreseeable future. The network confirmed this week that "America's Election HQ," a program that displaced "The Big Story" temporarily last month, would continue indefinitely. The program's hosts, Bill Hemmer and Megyn Kelly, also anchor the network's mid-morning newscast and are seen as rising stars on the channel. The change was first reported by the blog TVNewser.com. John Gibson, the longtime host of "The Big Story," will continue to have a role on television, the network said, although it appears that his future for now lies mostly on radio.

A former MSNBC host, Gibson has become known for semi-frequently attacking his former employer, particularly its left-wing host Keith Olbermann, whom Gibson refers to as "Bathtub Boy." The reference is to Olbermann's extreme reluctance to cover the Monica Lewinsky scandal of then-president Bill Clinton. According to Gibson, Olbermann preferred to stay at home and sit in the bathtub rather than come in to work.

FNC's John Gibson opened Tuesday's The Big Story by looking at the “gall” of liberal Democrats condemning Rush Limbaugh for supposedly insulting as “phony soldiers” Iraq war veterans who oppose the war. During a segment with former Republican Senator Rick Santorum and Jonah Goldberg of National Review Online, on how liberals have deliberately misconstrued Limbaugh's remark, Gibson played soundbites, critical of troop performance, from Senator Harry Reid, Senator John Kerry, Congressman John Murtha and Senator Dick Durbin. Following each clip, FNC displayed a bumper with a sound effect: “Who said that? Not Rush Limbaugh!” Gibson explained after the four videos aired: “None of those things were uttered by Rush Limbaugh. I mean, in a way you wonder where do they get the, I don't know, gall to be going after him over this?” 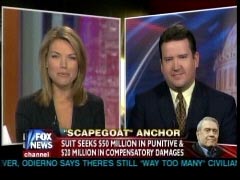 "As a public relations effort, I mean, this is like the litigation equivalent of a suicide bombing. It just doesn't make any sense," noted MRC director of media analysis Tim Graham about former "CBS Evening News" anchor Dan Rather's lawsuit against CBS. The NewsBusters senior editor was interviewed shortly after 5:30 p.m. Eastern on Thursday's "Big Story" by Fox News reporter Heather Nauert. 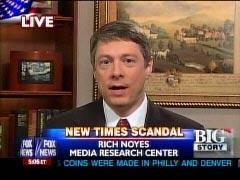 Rich Noyes, Director of Research at the Media Research Center is scheduled to appear on this afternoon's The Big Story with John Gibson on the Fox News Channel. He should appear near the start of the 5pm EST program. That's 4pm CST, 3pm MST and 2pm PST.

NewsBusters fans are certainly aware that former Partridge Family member Danny Bonaduce is a highly outspoken conservative that doesn’t mince words as reported here and here. On Friday, Bonaduce was John Gibson’s guest on Fox News’s “The Big Story,” and the pair took issue with the following statements recently made by Robert Redford (video available here courtesy of our friend at Ms Underestimated):

ROBERT REDFORD, ACTOR/DIRECTOR: In light of what's happened in the last six years, political diversity has been attempted to be thwarted, and we have kept it alive here. We have nodded here to any of the snuffing attempts that have come from the administration.

I think anybody with a rational mind, with a sense of decency, is being positioned as a lefty by the behavior of the extreme right.

Gibson was first up to take swings at this piñata:

FNC's John Gibson: Can a TV Network 'Decide when the U.S. Surrenders in Iraq?