By Matthew Balan | January 26, 2010 7:37 PM EST
CNN on Tuesday highlighted the UN’s Intergovernmental Panel on Climate Change use of a unsubstantiated claim about the Himalayan glaciers melting by 2035 to put pressure on politicians across the globe. Meteorologist Rob Marciano thought the “snafu” on the part of the IPCC was “inexcusable,” while anchor Rick Sanchez put the panel and its head on his “List You Don’t Want to Be On.”

Marciano brought up the week-old story during a segment 49 minutes into the 8 am Eastern hour. He played a sound bite from climatologist Jim White, who was attending the annual Steamboat Springs Weather Summit in Colorado (Marciano was on-location in Steamboat Springs). The CNN meteorologist voiced his agreement with White, who blasted the IPCC’s exaggeration: 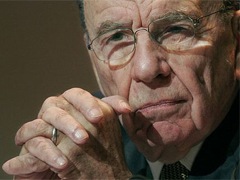 Rupert Murdoch sees a future in journalism. With newspaper circulation at post-war lows and major dailies shutting down in a number of cities, he may be one of the few optimists left. But first, Murdoch claims, the American government must change its obsolete and destructive regulatory policies that, he says, are preventing major news outlets from competing.

"Good journalism is an expensive commodity," Murdoch told an audience at a Federal Trade Commission workshop on the future of journalism today. "Critics say people won’t pay, but I say they will. But only if you give them something good." Murdoch has announced plans to institute paywalls for all online content offered by his giant news conglomerate, News Corp.

Though Murdoch is confident that paywalls would more than make up for revenue lost by shortfalls in advertising dollars, other newspapers' experiences with the system have failed to do so. The New York Times in 2005 began charging for many of its columns, but eliminated the paywall after revenues failed to outweigh advertising dollars. Still, there are a number of unexplored options for online news payment schemes, and Murdoch is no rookie in the news business.

E-mail messages between high-ranking scientists appear to indicate a conspiracy by some of the world's leading global warming alarmists to falsify temperature data in order to exaggerate global averages.

A statement released Friday by the alarmist website RealClimate has confirmed that e-mail servers at the University of East Anglia's Climate Research Unit (CRU) in Norwich, England, were hacked recently with contents illegally made available over the Internet.

Although the authenticity of all these e-mail messages has yet to be proven, what's currently available points to a coordinated attempt to manipulate climate data by those directly involved in advancing the theory of anthropogenic global warming.

New Zealand's Investigate magazine reported Friday that it has verified these e-mail messages are indeed real:

Two months ago, there was the "Dog Ate My Global Warming Data" episode. As noted at NewsBusters and at BizzyBlog (original source: National Review Online), we learned that important original information forming the underpinning of global warming alarmists' claims about the earth heating up has vanished. It is longer available and apparently can't be reverse engineered.

Today, e-mails hacked from a UK climate research facility appear at a minimum to indicate a willingness by scientists to fudge the data to make alleged warming trends more clear and convincing. At worst, the whole enterprise could be totally discredited.

Important and damming passages from certain of the e-mails have been acknowledged as authentic.

The Australian Herald Sun's Andrew Bolt claims, as paraphrased by Ed Morrissey at Hot Air, that "that those e-mails expose a conspiracy to hide detrimental information from the public that argues against global warming."

Here are key paragraphs from Bolt's blog post (presented out of order because of frequent updates at that post):

Over the last few weeks dozens of Iranians yearning for a more democratic government, striving to beat back the oppressive Mullahs, desperate to live free, have been killed in the streets of Iran during democratic protests. In China Uighurs and members of the religious sect Falun Gong are constantly attacked, imprisoned, tortured and killed for their ethnicity or beliefs by Chinese officials. Not long ago Buddhist Monks were killed by police for their protests in the streets of Myanmar. And on a nearly daily basis, members of the Taliban are killing villagers for not observing their oppressive rule in Afghanistan and Pakistan.

We live in times of violent protests tearing at some of the most oppressive governments in the world. And so, Australia's ABC fielded a report about one "violent" protest experienced by one of its own reporters. Was it murderous Islamists attacking villagers? How about Chinese thugs killing ethnics? Perhaps it was an Iranian Mullah ordered massacre of citizens wanting democracy that frightened her so much?

Uh, no. It was Orthodox Jews that spit on her.

Andrew Bolt has a fine takedown of The Age newspaper in Australia's Herald Sun today, April 17. It details quite nicely that not just the U.S. media is wallowing in leftwing "group think." His is headlined "Picture is kiss of death for George Bush prejudice" and lays out the complete lack of historical research of even recent events perpetrated by The Age newspaper in its unthinking assumptions of what President Bush did or didn't do over the last eight years re foreign policy. Naturally, The Age falls all over itself in support of the leftist messiah, Obama.

Bolt details the erroneous claims by The Age and refutes them with the facts. The Age claimed it was "unimaginable" that Bush could ever have "kissed" any Muslim foreign leaders, as Obama recently did to the Turkish leader, appearing to imagine that such an intimate gesture would have solved all the world's problems. Bolt points to the photo of Bush kissing the current King of Saudi Arabia to prove The Age wrong.

No one can accuse News Corp. CEO Rupert Murdoch of being an economic cheerleader, despite his net worth of $4 billion according to Forbes magazine.

In an interview with Fox News Channel and Fox Business Network anchor Neil Cavuto on April 2, Murdoch was not hopeful the financial markets would recover their value within the next 12 months.

"Look, I'm not a market expert," Murdoch said. "I would say this is a bear market rally still. We're not going back to the old levels in any hurry at all. That's two or three years away." Not that it ever really went away, but fake news is back in Gaza, and the worldwide media is being played.

Many readers will likely detect the fakery in the linked video pictured on the right on their own (HTs to Charles Johnson at Little Green Footballs [LGF] and Bob Owens of Confederate Yankee via Instapundit).

The video purports to show the death and hasty burial of a cameraman's 12 year-old younger brother, one of two children allegedly killed on the roof of their home in rocket fire from an Israeli drone.

A seemingly pretty knowledgeable LGF commenter spotted what many inexpert readers who see the video will also catch (bolds are mine):

I’m no military expert, but I am a doctor, and this video is bullsh-t. The chest compressions that were being performed at the beginning of this video were absolutely, positively fake. The large man in the white coat was NOT performing CPR on that child. He was just sort of tapping on the child’s sternum a little bit with his fingers. You can’t make blood flow like that. Furthermore, there’s no point in doing chest compressions if you’re not also ventilating the patient somehow.

Down Under Journalists Turn Cynical Towards Chaste Catholics

Friend and fellow blogger Dawn Eden, touring Australia for Pope Benedict XVI’s visit to the country for World Youth Day, reported on her site on Tuesday that she fell prey to the Down Under version of liberal media bias. "A Current Affair," a program on Sky Television that shares the same name and ilk with the Maury Povich program, interviewed Eden, an author and convert to Catholicism, for a segment they labeled "No Sex Pilgrims" (video available here). The Aussie tabloid television reporters who featured her seemed incredulous that anyone in this day and age would live chastely.

"A Current Affair" correspondent Ben McCormack interviewed Eden and Ruth Russell, a 20-year-old native Australian who is a "committed Catholic and a virgin." Near the beginning of the segment, McCormack reminded viewers that "[w]e live in a sex-filled world -- movies, television, advertising, and film clips..." He continued, "...[W]hile many teenagers are doing it younger and more often, Ruth Russell has chosen to just say no." He later described Russell as "an out and proud Catholic, and an out and proud virgin, choosing to save sex until she's married."

Are Media Focusing on Limbaugh's Operation Chaos to Force Hillary Out?

Are "Totally in the Tank for Obama" media members focusing on Rush Limbaugh's "Operation Chaos" in order to force Democrat presidential candidate Hillary Clinton out of the race?

Consider if you will all of the attention Limbaugh's months-old plan to keep the Democrat nomination process going as long as possible got Tuesday evening and Wednesday morning following Hillary's tough night in North Carolina and Indiana.