On Comedy Central's South Park cartoon Wednesday, the world's environment is threatened by the impossible smugness of those driving hybrid cars. (The smug clouds are biggest over San Francisco, naturally.) The danger passes only when the people of South Park mash their hybrid cars into little aluminum cubes. And, just for fun, the animators named their hybrid the "Pious," a knock on Toyota's "Prius."


Funny enough, but the very next morning on NBC's Today, reporter Tom Costello was lauding the wonders of efficient, low emission hybrid cars (as opposed to those awful SUVs) when he showcased a smug driver who sounded like a South Park gag. MRC's Geoff Dickens caught this part of NBC's report:

Tom Costello: "Betsy Rosenberg didn't always drive a hybrid car but after getting fed up with 15 mpg in her SUVs she traded them both in for a Toyota Prius and 50 mpg."

Betsy Rosenberg: "I decided this was something that I would do to protect my kid, my country, my planet and be patriotic. I think that's the patriotic thing to do is to use less gas and not more."

Reporters for rival networks of Fox News had unkind things to say about Dick Cheney's preference for Fox when staying at hotels.

"And he wants brewed decaf coffee and all the televisions must be tuned to the home team, Fox News. Horrors to think he might encounter other networks while flipping the channel himself on his way over... It's got me thinking I should make some demands of my own. From now on whenever I travel, I want a bottle of wine waiting, not just any wine, but fine wine. I want the TV tuned to MSNBC."

To which anchor Soledad O'Brien quipped, "Not really a shocker on that front."

This is something I thought I’d never say, but bravo to CNN’s Soledad O’Brien who did a far better job of questioning Sen. Russ Feingold (D-Wisconsin) concerning his call for a censure of President Bush than ABC’s George Stephanopoulos did on Sunday’s “This Week.”

On CNN’s American Morning, U.S. News & World Report Editor-At-Large David Gergen fretted that Republican Senator John McCain may be transforming into a "hard-core conservative" after McCain expressed his support for President Bush at the Southern Republican Leadership Conference in Memphis, Tennessee on March 10.

Think the mainstream media has let go of its anger over the events surrounding the release of Vice President Dick Cheney’s hunting accident to the press? Judging from the tone of his comments on today’s American Morning, CNN’s senior national correspondent John Roberts certainly has not. Roberts, formerly biased over at CBS News as the MRC’s Rich Noyes reported here, appeared shortly after 8am to discuss President Bush’s speech in India. After trumpeting the latest CNN/USA Today/Gallup poll showing the job approval numbers for the President slipping, Roberts attributed the decline to a "tired" White House staff.

John Roberts: "But there’s no question that the people at the White House have, you know, they’re almost like the gang that can’t shoot straight–"

That’s when Roberts took his shot at the White House and Cheney:

Roberts: "–and when they do shoot straight, they don’t tell people about it for 24 hours. But the problem could be that they’re, they’re suffering real fatigue there, that they’re burned out, that they need to bring in some new blood."

The transcript of the segment with American Morning co-host Miles O'Brien is behind the cut.

CNN Asks: "Is Hollywood Out of Touch with Middle America?"

While Jon Stewart and George Clooney have denied any disconnect between Hollywood and middle America, as reported by Tim Graham here, today’s American Morning aired a piece shortly before 8am that seems to disprove what these members of the liberal Hollywood elite were claiming. CNN entertainment reporter Brooke Anderson spoke to residents of small town Lebanon, Kansas, who expressed their view that Hollywood is not honoring or promoting the type of films that they enjoy.

Randy Maus, Lebanon resident: "Out here, at least in rural America, where it’s–you could say it’s the Bible belt, we’re still looking for movies that have creative substance and a storyline."

Unidentified Female: "We’re just not interested in all the sex and skin."

Brooke Anderson: "What kind of movies do you want Hollywood to make?"

Unidentified Female: "What about Sound of Music and some of those?"

By Mike Bates | February 15, 2006 12:07 PM EST
It may not be much, but the mainstream media appear dedicated to beating the Cheney hunting accident story into the ground. On CNN's American Morning today, anchor Miles O'Brien interviewed New York Daily News gossip columnist Lloyd Grove about it.

Viewers of today's American Morning on CNN were treated to co-host Miles O'Brien's view of scientists who dare question the validity of global warming. In a debate between Reverend Jim Ball, director of the Evangelical Environmental Network, and Reverend Richard Land, president of the Southern Baptist Convention's ethics commission, shortly after 8:15am, O'Brien revealed his beliefs.

Miles O'Brien: "You know, I know that science and religion are often at odds, but the scientific evidence is overwhelming at this point. Are you denying that?"

O'Brien: "Scientists who are bought and paid for by the fossil fuel industry, usually."

Land: "Well, not, not necessarily. I'm not going-" 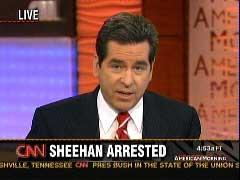 On today's CNN American Morning, anchor Soledad O'Brien began a story with: "Lots of people in New Orleans wondering exactly what happened last night. They listened to the president for about 47 minutes before there was even a mention of their city."

After playing a clip from President Bush's State of the Union address, she continued: "And that was kind of it. The president went on for just about a minute. A little bit less. Didn't offer any new money, any new aid."