But Totenberg matched other media liberals in finding no measurable ideology in Elena Kagan when her nomination was announced. Within minutes (for the West Coast stations still in Morning Edition time), Totenberg could only exclaim Kagan was "was a star student at Princeton, at Oxford, at Harvard Law School -- then clerked for the man she calls her mentor, Supreme Court Justice Thurgood Marshall, who used to refer to her as Shorty."

NPR's All Things Considered devoted an entire one-sided story Tuesday night to the apparently heart-breaking news that illegal aliens are considering moving out of Arizona to more illegal-friendly states.

Reporter Ted Robbins spent his whole story talking to illegal aliens and their defenders about how they're misunderstood, and even touted how community organizers are "flexing their political muscle" by putting together "barrio defense committees" like "reverse neighborhood watches" to alert illegals that law enforcement is in the area.

The Pew Research Center last year found that public trust in the media was at an historic low because of those perceived slants. Well, several listeners thought our story had a bit of a slant. Stan Henney of Longmont, Colorado, writes: The reporter described Fox News as voraciously conservative, and MSNBC as tilting to the left. Both are subjective, not objective descriptions. I personally think that while some Fox personalities can be aggressive, MSNBC does a lot more than just tilt.

Does NPR love Barack Obama? Look at how they reviewed an Obama book Tuesday night on All Things Considered:

In many ways, David Remnick's new book, "The Bridge: The Life and Rise of Barack Obama," is very much like its subject: even-handed, eloquent, beautifully packaged.

The reviewer was Susan Jane Gilman, author of a book called Undress Me In the Temple of Heaven. She liked the Remnick book, but felt that much of it was already familiar and too recent to feel like history. She ended with this: In Friday's speech at George Mason University, President Obama slammed as one of the "crazy things" conservatives said about his health-care effort was that it would offer federal insurance coverage to illegal aliens. On Friday night's All Things Considered newscast on National Public Radio, reporter David Welna's story underlined that liberals like Rep. Luis Gutierrez expected exactly that, but are now hoping that an amnesty bill will make them eligible instead. But Welna sought out no opponents of illegal immigration for comment.

The renewed effort to move immigration legislation comes as thousands of pro-immigrant activists plan to march on the Capitol this Sunday as the final showdown on health care begins in the House.

Robert Siegel, an anchor of NPR’s evening newscast All Things Considered, had an emotional response on Wednesday night as Pew pollster Andrew Kohut described how young adults voted heavily for Obama and call themselves liberals, are less "militaristic" and less religious: "Who raised these terrific kids, Andy?" The men laughed.

The Pew Research Center studied the "millennials," those aged 18 to 29 who did much growing up in the first decade of the new century. Here’s how the discussion unfolded:

SIEGEL: Give us a thumbnail sketch of the millennials.

They call themselves liberals. Yes, they use the L-word. Twenty-nine percent of them say they're liberals. Less than 20 percent of all of the other generations say that. They're very tolerant of gays and race...

NPR on Code Red Protest: 'They're Happy to Tell You, They're the Right-Wing Mob, Several Hundred' Strong

Last week, NPR president Vivian Schiller took questions briefly on washingtonpost.com about the taxpayer-funded radio network. When the liberal-bias question came up, she claimed "NPR tilts left! NPR tilts right! Frankly, we hear it equally from both sides -- or should I say from ALL since most issues are not that linear. The fact is, NPR takes NO sides."

When someone discussed the regular commentaries of NPR Senior News Analyst Daniel Schorr, she claimed: "Dan Schor [sic] is a liberal commentator. I will not deny that is true. So what do we do about that? We balance his views with those of conservative guest commentators who frequently appear on our airwaves."

But what if those conservative guests just happen to take a stand NPR likes? Case in point: on Tuesday night’s All Things Considered, NPR touted a Sarah Palin book review by "conservative columnist" Rod Dreher, who concluded: "She quotes her father's line upon her resignation this summer as Alaska's governor: Sarah's not retreating, she's reloading. On evidence of this book, Sarah Palin is charging toward 2012 shooting blanks."

Speaking of blanks, did Dreher really read the whole book? On his Beliefnet blog yesterday, Dreher blogged at 12:35 pm that he was 100 pages in. All Things Considered starts airing locally at 4 pm. Did he really finish the book and write a script before the taping?

On Monday night’s All Things Considered newscast on National Public Radio, reporter Joseph Shapiro recounted the sympathetic story of Regina Holliday, who lost her 39-year-old husband Fred to kidney cancer. Holliday painted a mural in Washington demanding "We Need Health Reform Now." (It’s headlined "A Widow Paints a Health Care Protest" and it's the most popular story on Wednesday at NPR.org.)

But Shapiro’s story actually skimmed over just how passionately ideological Holliday’s mural is. She's amazed anyone could possibly be against health reform. On her blog she explained that she painted her opponents as a little girl in a red, white, and blue outfit:  "I wondered 'How can you be against this?' Then I realized they were acting like people who have been abused. She is a pretty little girl with welts on her legs..." [Italics hers.]

On air, NPR stuck to the heart-tugging narrative. The politics emerged late in the story:

NPR's Schorr: ObamaCare Would 'Save Many Lives,' So Why Fuss Over Illegal Aliens? 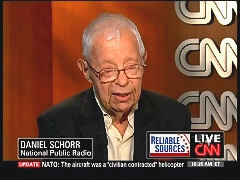 NPR "senior news analyst" Daniel Schorr recited the socialist sermon on Wednesday night’s All Things Considered: nationalized health care "would save many lives," and all that bother about providing taxpayer-subsidized abortions and health care for illegal aliens are tiresome "distractions" from the urgent need for more government. Schorr lamented:

Barring illegal from insurance benefits doesn't bar them from receiving treatment in a hospital emergency room. ERs have become the place of treatment of last resort for too many people here legally or illegally. T.R. Reid tells of a dramatic case in his book "The Healing of America." Nikki White lost her job and health insurance as a result of having a type of lupus. Because of her pre-existing condition, she couldn't get new health insurance. Eventually, she collapsed and was taken to the emergency room. Three doctors undertook to treat her until her condition stabilized. That involved six months in critical care and 25 surgical operations. Then she went home, still without insurance, and died at the age of 32. Her doctor, Amylyn Crawford, said: Nikki died of complications of the failing American health care system.