His party is not mentioned in the story at AL.com.

Langford is Democrat (even Wikipedia took a while before naming his party).

Here are key paragraphs from the story:

Southern-based New York Times reporter Adam Nossiter once again went hunting around for racially charged quotes from Alabamans, and bagged his limit, in Tuesday's front-page story from Vernon, Ala, "For South, a Waning Hold on National Politics."

The New York Times has intermittently written up the strange allegations that former White House advisor Karl Rove tried to destroy a former governor of the state of Alabama, Don Siegelman. Siegelman, a Democrat, was prosecuted by the Justice Department and ultimately sentenced to federal prison for bribery. He was recently released on appeal, which probably spurred the paper's new interest in the case.

Can you feel the drama?

'60 Minutes' at It Again with Rove/Siegelman Story?

"60 Minutes" recently aired the claim that former Alabama governor Don Siegelman went to jail not for corruption, but because he belong to the wrong political party, and that the investigations that landed him in jail for bribery were politically motivated.

One of the most explosive claims made was that Karl Rove was involved in an attempt to entrap Siegelman:

On Monday, President Bush honored a Cuban political prisoner, author Harper Lee, and former congressman Henry Hyde (R-Ill.), along with five others in a Medal of Freedom ceremony. Yet while Washington Post Foreign Service staffer Nora Boustany led her November 6 article with a focus on the Castro-imprisoned Dr. Oscar Elias Biscet, Post headline writers slapped a bland headline on the story, "Cuban Doctor Among Eight Honored at White House."

Arthur Bremer, the man who on May 15, 1972, attempted to assassinate then-Gov. George Wallace (D-Ala.), is scheduled to be released from a Maryland correctional facility later this fall, the Associated Press reports.

There's been an interesting "disturbance in the Force" involving the press and its singling out of the South concerning environmental issues and alcohol.

Last Friday, CNN's John Roberts used a story on a drought affecting the production of Jack Daniel's whiskey in Tennessee to fire a quick drive-by-style hit on Southern conservatives, their apparent love of whiskey, and their doubt of global warming.

Only a few days later, Newsweek's latest issue chose to print a quote from the Republican governor of Alabama in their "Perspectives: Quotes in the News" section.

"In Alabama we have had experience turning corn into alcohol for years."

-Gov. Bob Riley, joking about the state's history of moonshining as he filled up a Chevrolet Impala with ethanol-based fuel. About 2,000 state vehicles will start using alternative fuel to save money and help the environment.

CNN Anchor: Democrats 'Weak On Defense, But That Was Ridiculous' 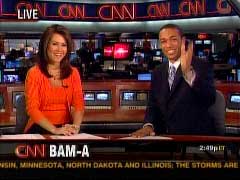 Following a report on fisticuffs in the Alabama State Senate, CNN reporter T.J. Holmes cracked a joke about Sen. Lowell Barron (D) being on the receiving end of a punch to the face from Republican Senator Charles Bishop.

A little anti-gun bias on CNN.