New York Times reporter Dan Bilefsky took on a right-wing radio host in Quebec, for some reason, on Sunday: “‘Trash Radio’ Host in Quebec City Fires Up Outrage, and Big Ratings.” From the start it was clear this would be no friendly profile like the one’s the Times once filed to to boost liberal radio hosts, like MSNBC’s Rachel Maddow in 2005, back when she hosted a show on the radio network “Air America.”

Hartmann wrote on left-wing Salon on June 26, “If liberal billionaires like Tom Steyer want to have a real and lasting impact on American politics, they should think seriously about buying a nationwide radio network.”

Al Franken’s recent book Giant of the Senate has a single aim, very much in line with Franken’s careers in media and politics: take down conservatives. Chock-full of quintessential nasty Franken wit, the book guides readers through Franken’s time on SNL, Air America, and – in recent years – the U.S. Senate. Reflections on (as well as various defenses of) his previous books, Lies and the Lying Liars Who Tell Them: A Fair and Balanced Look at the Right, Rush Limbaugh Is a Big Fat Idiot, and The Truth (with Jokes) crop up throughout the memoir. The book recounts Franken’s time in media and politics. Yet it ultimately boils down to a constant (albeit comedic) attack on anything that hints at conservatism.

Although many of the images are striking and well worth viewing, there's also a dose of the liberal politics of the New York Times on display in its "Year in Pictures" in today's paper.

The very first photo sets the Times' tone, depicting a Ferguson demonstrator with hands up confronted by a heavily-armed phalanx of police. But it is the commentary accompanying another photo that really gives the Times' game away.  Seen from the inside of a car, the text reads [emphasis added]: "Ignacio, an illegal immigrant, pulled into a convenience store in Tulsa, where a simple traffic stop could lead to deportation."  Well, yes.  Be the infraction large or small, drawing police attention can lead to the discovery that someone is in the country illegally and thus subject to deportation.

The vast arid wasteland known as liberal radio is becoming even more barren. Loose-cannon lefty Randi Rhodes is pulling the plug on her show.

News of Rhodes' impending departure came in a terse statement from Premiere Networks, which broadcasts her show through 35 affiliates -- "[We] can confirm that Randi Rhodes has decided to end her national radio program. We've had a successful partnership with Randi for several years and we wish her all the best for the future. Premiere Networks will conclude syndication and production of Randi Rhodes on May 16, 2014." (Audio clips after the jump)

Ed Schultz Says Putin Undeterred, Then Questions Patriotism of 'SOB' Republican Who Does the Same

Remember back in the Bush years when the left deemed dissent to be the most glorious form of patriotism? As every conservative knew, that allegedly principled belief was contingent upon a Republican serving as president.

Once a Democrat returned to the White House, this ardent trumpeting of dissent as humanity's highest calling oddly began falling into disrepute, as to be expected whenever cults of personality take hold around leaders of dubious strength. (Audio after the jump)

Mike Malloy: MLK Would Be 85 But J. Edgar Hoover and Govt. Murdered Him

Would any Martin Luther King Day be complete without a liberal radio talker waxing conspiratorial about King's death while not citing a shred of evidence?

What a surprise it wasn't that this was heard yesterday from Mike Malloy, a leftist so beyond the pale he was once fired by the ardent redistributors at now-defunct Air America Radio. (Audio clips after the jump)

As easy as it might be to forget them in the cobwebs of the AM radio dial, the liberal pretenders to the Rush Limbaugh throne are still broadcasting, and they're often utterly, shamelessly ridiculous. Case in point: Even Al Sharpton lamely used his radio show to defend Joe Biden's anti-Republican "they want to put y'all in chains" race baiting in front of a black audience.

Another case in point: Liberal radio hosts adore Harry Reid for making utterly unsubstantiated ugly charges that Mitt Romney evaded taxes for a decade. Bill Press has routinely declared his love for the tactic — even on CNN, where someone might have noticed. On "Reliable Sources," Press taunted the journalists who might want to play by the rules of evidence.

As he appeared as a guest on Friday's Piers Morgan Tonight on CNN, moments after decrying Rush Limbaugh's recent "slut" comment, liberal talk radio host Montel Williams defended his infamous suggestion that Michele Bachmann should kill herself by decapitation as being unrelated to the recent Limbaugh matter.

While he was discussing his encounter with a wounded American soldier, he bizarrely brought up Limbaugh as if to suggest that the conservative host's strong words were a dishonor to the people who fight to defend the country. Williams:

NPR pretended that there wasn't a single supporter of Pope Benedict XVI in Spain on Friday's Morning Edition, choosing to devote an entire report on the "many people are grumbling at the cost" of the upcoming papal visit to the country. Correspondent Lauren Frayer not only failed to mention the 428,000 people from around the world who are registered for the World Youth Day event with the Pope, but also omitted the leftist bent of the protesters who are organizing a boycott.

Host Steve Inskeep, after delivering the "grumbling" line, highlighted how "local priests, though, have issued a rare complaint. The Pope's visit will cost Spain millions, at a time when the government is also slashing public salaries and public services." Frayer then explained at the beginning of her report that "more than 100 priests from Madrid's poorest barrios posted a letter online, saying they disagree with the cost and style of Pope Benedict's visit. Father Julio Saavedra says it's unfair how the Spanish government is giving tax breaks to companies like Coca-Cola and Santander Bank for sponsoring the visit."

"Rush Limbaugh needs to choke to death on his own fat," deranged left-wing radio show host Mike Malloy hissed on his February 18, 2009 program.

"We ought to rip [Dick Cheney's heart] out and kick it around and stuff it back in him," MSNBC's Ed Schultz blustered on his February 24, 2010 radio program.

Those are just three examples of left-wing hate that the mainstream media haven't denounced while accusing conservatives like Sarah Palin of engendering violence in the wake of the Rep. Gabrielle Giffords shooting.

"Have you ever heard any reporter... denounce these examples?" NewsBusters publisher Brent Bozell asked Fox News' Sean Hannity after watching the montage during last night's "Media Mash" segment on "Hannity."

[For the full segment, watch the video below the page break or listen to the MP3 audio here.] 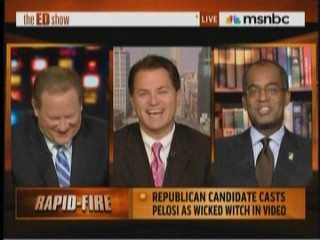 Republican strategist Ron Christie on Monday demonstrated why Keith Olbermann is smart to not have conservatives on his program, for most MSNBC hosts are just not up to the challenge.

Appearing on the "Ed Show" to address some comments Newt Gingrich recently made about President Obama, Christie refuted former Air America host Jack Rice's contention that Gingrich was being racist.

"I disagree with what he had to say this past weekend, but to suggest that the former Speaker of the House is trying to say, 'Oh the President of the United States is black and and I'm white' I think is so far out of bounds and so untrue," scolded Christie. "This has to stop."

Minutes later, when the host asked his Republican guest what the "con" was that Gingrich accused Obama of perpetrating on the American people, Christie hit the ball so far out of the park that by the end of the segment, his liberal antagonists were left laughing in astonishment (video follows with transcript and commentary):