Rolling Stone gave liberal women in Congress the rock star treatment in their March issue, with glowing interviews and glamorous photo shoots. The “Women Shaping the Future” are Speaker Nancy Pelosi and "the new voices of the House" Reps. Jahana Hayes, Alexandria Ocasio-Cortez, and Ilhan Omar.

‘The World’s F-ed Up,’ New Young Adult Show on Netflix a Bundle of Bad Messages

On Christmas evening, appearing in print on Sunday, December 26, Jeremy Peters at the New York Times pretended that the term "fake news" has only gained common currency very recently during the social media era. He also effectively contended that the establishment press holds ownership rights over the term, claiming that "conservative cable and radio personalities, top Republicans and even Mr. (Donald) Trump himself ... have appropriated" it.

Peters, who graduated from the University of Michigan in 2002 and arguably knows better, could not be more wrong. Center-right media critics, pundits and personalities have used the term "fake news" to describe establishment press reporting for at least a decade, usually with total justification. It's the press which is "appropriating" the "fake news" term in the name of marginalizing and silencing non-"mainstream" news sources.

We recently reported on how Univision was the biggest media loser from this election cycle, given all that was at stake for the network. Those ramifications have begun to play out in real time and are now affecting real lives.

The conventional wisdom in the liberal media is that the special election in NY-26 was a referendum on the Ryan budget, which the voters rejected by electing the Democratic candidate.

Despite the flaws in this talking point, which NewsBusters' Lachlan Markay explains here, Time magazine's Joe Klein took this argument to a whole new low.

Klein has since tried to walk back this declaration, but it wasn't the only bizarre claim he made on Lawrence O'Donnell's prime-time program.

In a Wednesday story at Reuters ("Bombing near Jerusalem bus stop kills woman, 30 hurt") describing the aftermath of  "a bomb planted in a bag exploded near a bus stop in a Jewish district of Jerusalem," reporter Crispian Balmer wrote the following (bold is mine):

Medics said three people were seriously hurt by the explosion, which hit one of the main routes into central Jerusalem in the afternoon, shattering the windows of a nearby bus. A woman in her 60s died in hospital.

Police said it was a "terrorist attack" -- Israel's term for a Palestinian strike. It was the first time Jerusalem had been hit by such a bomb since 2004.

My, my. It's as if the word "terrorist" was invented by the Israelis just for the occasion.

By Alex Fitzsimmons | July 8, 2010 4:43 PM EDT
Donny Deutsch was a lonely man on Thursday's "Morning Joe." The only panelist to decry Sarah Palin's inspiring new video designed to galvanize conservative women for the midterm elections, the MSNBC contributor puzzled even his liberal colleagues.

"I actually think it's insulting to a lot of women," thundered Deutsch. "I'm going to tell you why. It's the same reason why every time they do '100 most successful women in business' cover stories."

New York Times writer Andrew Ross Sorkin and Time magazine's Mark Halperin interjected to refute Deutsch, but the determined advertising guru just talked over them: "Listen to me! The American public wants more than 'I protect my cubs.'"

During the Second Lebanon War in 2006, the news agency Reuters admitted that one of its pictures of smoke and destruction caused by Israel's bombing of Beirut had been augmented in a Photoshop program by photographer Adnan Hajj.

The Israeli newspaper Haaretz yesterday reported Reuters was under fire again yesterday for manipulating photographs in a bias against Israel, this time in the Gaza flotilla story. Natasha Mozgovaya reported Reuters cropped inconvenient truths out of the frame:

The Reuters news agency has been accused of removing images of activists wielding weapons and bloodied and wounded Israeli naval commandos from photographs taken on board a ship headed for Gaza during deadly clashes last week.

Reuters on Monday rejected accusations of biased coverage, adding that it had reverted to the use of "the original set" of images, once the organization realized that the photographs it had published had been cropped.... 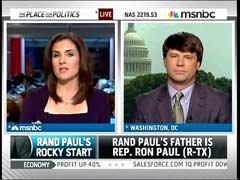 MSNBC continued its attack on senatorial candidate Rand Paul on Friday. News Live host Lynn Berry brought on the Huffington Post's Ryan Grim to smear the Republican's libertarian leanings as possibly leading towards bigotry. At no time did Berry mention to her audience that the Huffington Post is an extremely left-wing website.

Instead, Grim was allowed to give a rambling diatribe in which he suggested that Paul's philosophy could be linked to racism and the post-Civil War Ku Klux Klan. (The Kentucky politician was questioned, Wednesday, by Rachel Maddow about the effectiveness of parts of the 1964 Civil Rights Act.)

Grim theorized, "And this thread goes all the way back to the Civil War." He continued, "Now, there was a campaign of terrorism and it was nothing more, nothing less than terrorism, by the Klan." After describing the effects of the end of Reconstruction, Grim opined, "And when that federal protection left, we had an experiment of what will happen if there's no federal protection against discrimination."

CBS and ABC Claim Bayh's Reelection Would Have Been 'A Lock' 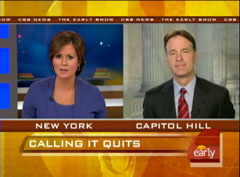 On Tuesday, both CBS Early Show co-host Maggie Rodriguez and ABC Good Morning America co-host George Stephanopoulos lamented the announced retirement of Democratic Indiana Senator Evan Bayh and proclaimed that his reelection would have been a virtual certainty. Rodriguez described it as "a lock," while Stephanopoulos asserted that it was "almost assured."

In reality, A January 25 Rasmussen poll showed Bayh losing to Republican Congressman Mike Pence, 44% to 47%. While Pence has since decided against running, the poll also showed former Republican Congressman John Stutzman, who has formerly announced his candidacy, getting close at 41% to Bayh's 44%. Numbers like that certainly do not suggest Bayh's reelection was anywhere close to being "a lock."

Both Rodriguez and Stephanopoulos made those comments in interviews with Bayh on their respective shows. Only a brief sound bite of the Senator was featured on NBC's Today on Tuesday.

On Good Morning America, Stephanopoulos almost pleaded with Bayh not to retire, claiming that if "centrists" like him leave, "doesn't that make the problem [of partisanship] worse? Why not stay and fix it?" While Rodriguez did not label Bayh as centrist, she did fret over his decision to retire: "What do you say to critics who say you did leave the Democrats high and dry at a time when they can't afford to be losing anymore seats?"