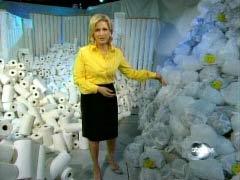 On the Friday edition of ABC’s “20/20,” Diane Sawyer stood in front of an ABC generated visual aid: A gigantic mound of plastic bags and paper towels.

While viewers were told that the interview with Venezuelan dictator Hugo Chavez “pulled no punches,” you sure could have fooled anyone watching. ABC’s March 16 “Good Morning America” treated Chavez as a man who “does like this country.”

She actually meant the United States.

ABC’s John Stossel is well known for his libertarian views and for challenging liberal conventional wisdom. On Wednesday’s Good Morning America, Stossel was at it again as he debunked the widely held perception that liberals are more generous in their charitable contributions than conservatives. As part of a 20/20 special airing Wednesday night, Stossel interviewed Syracuse University professor Arthur Brooks, who conducted a study which found that conservatives, while making slightly less money than liberals, actually contribute more:

John Stossel: "But it turns out that this idea that liberals give more is a myth. These are the twenty-five states where people give an above average percent of their income, twenty-four were red states in the last presidential election."

In Monday's Media Notes column in the Washington Post, Howard Kurtz found the media are attracted to polls like crack cocaine, and they've "grown addicted to the GOP-in-trouble narrative." Kurtz says it isn't about liberal bias, but the desire for a change in story line. Riiight. Journalists confirm that Democrats have been boasting of a takeover:

"Last Days on Planet Earth" was the alarming title of ABC's 20/20 special tonight, a show that presented seven frightening scenarios that could lead to our extinction. But the bottom six in the countdown, things like supervolcanoes and asteroid strikes, nuclear annihilation and superbugs (natural and man-made) were only window dressing for the real point of the show; the number one threat to human existence...global warming. 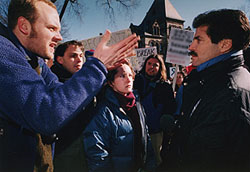 The New York Sun reports that ABC "20/20" co-anchor John Stossel was confronted by protestors outside the studio who were enraged by a report he did on public schools. Organized by the United Federation of Teachers, hundreds of teachers waved signs and shouted at him to apologize for a January segment called "Stupid in America," which the teachers said called them "lazy."

On Friday’s Good Morning America, ABC’s Charlie Gibson and Barbara Walters, while doing a promo for her upcoming interview with former Secretary of State Colin Powell to be aired on 20/20 later that evening, appear to have distorted the meaning of some of Powell’s statements:

Gibson: There's a number of things in this. Number one you ask about whether he, he laid out in that speech some connection between terrorism and Saddam Hussein and you asked him about that.

Walters to Powell: When you learned that you had been misled how did you feel?

This is creative editing to make a point different than what Powell was stating.  Gibson asked Walters about a connection between terrorism and Saddam Hussein.  However, Walters’ question to Powell about having been misled was concerning weapons of mass destruction.  This is how the ABC News website related the exchange: