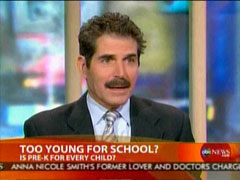 Now for something completely different, or at least something pretty rare on network TV. ABC’s John Stossel has paired up with Drew Carey and the libertarian Reason TV for tonight’s 20/20 special headlined “Bailouts and Bull,” on the limits and unintended consequences of government involvement in the economy and in our lives.

While Stossel is known for his skepticism of big government solutions, most journalists at the big networks have been accepting of the premises of President Obama’s interventionist approach, not challenging his assertions the way President Bush’s economic policies were frequently challenged.

Stossel will tackle the idea that all economists support Obama’s government-spending-as-stimulus policies, liberal claims that the American Dream is now out of reach for most workers, and the idea that a fence along the Mexican border will really stem the tide of illegal immigrants.

By P.J. Gladnick | February 8, 2009 6:04 PM EST
Your humble correspondent has always been somewhat uneasy about newspapers publishing the names and photos of clients of prostitutes. For committing what is at worst a misdemeanor, those clients have a good chance of having their entire lives ruined when their wives and family find out. The punishment seems quite a bit out of proportion to the crime. However,  I must admit getting a bit of a kick out of the ABC News show, 20/20, reporting on the clients of Kristin Davis aka the Wall Street Madam. Hey, why should we feel sympathy for rich clients who feel it is necessary to pay for prostitutes when almost any normal guy with lots of bucks would have little problem attracting women? Apparently there are a lot of folks in both high finance and politics (think Eliot Spitzer) whose personalities are so loathsome that they have to pay for sex.

No client names were actually revealed but plenty of clues were given. So put on your Sherlock Holmes caps and see if you can figure out who were the clients of the special services provided by the Wall Street Madam:

Walters Put Bush on Defense in 2001, But Tosses Softballs to Obama 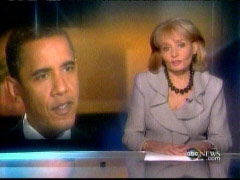 In the interview for Wednesday’s Barbara Walters Special on ABC with Barack and Michelle Obama, excerpts of which were also shown on Wednesday’s World News with Charles Gibson, Walters asked few questions that put the Obamas on the defensive, in contrast with her January 2001 interview, aired on 20/20, with then-President-elect Bush in which she challenged him on a number of fronts. Most notably, she seemed to chide Bush for choosing John Ashcroft as Attorney General because he "openly opposes abortion," and claimed that Ashcroft was "not considered a friend to civil rights." She asked Bush about reports that, as governor of Texas, he "spent relatively little time studying specific issues," and "only does a few hours of work" a day. The ABC host also challenged Bush from the left on the trade embargo against Cuba, and even asked Laura Bush if her more "traditional" plans for her time as First Lady would be a "setback for women." It is also noteworthy that Walters asked Bush about his plans for dealing with Saddam Hussein and cited "people in the know" who contended that the Iraqi dictator was "stronger than ever."

Since March 26, 2008, the ABC network has devoted nine segments or 64 minutes and 48 seconds to the "pregnant man" Thomas Beatie, including three stories in the last four days on either "20/20" or "Good Morning America." On Monday, GMA weekend anchor Kate Snow invited Beatie, who was born a woman but kept her reproductive organs after having transgender surgery, to discuss the autobiography "Labor of Love," which recounts the author's first pregnancy and now another. Snow announced that Beatie would be appearing "to tell us what his definition of family and fatherhood is all about."

Since GMA first discussed the story on March 26, the program has gone back to the subject again and again. Despite hyping the transgendered birth, most stories acted as though there was nothing at all controversial about the topic. News anchor Chris Cuomo told a doctor in March, "Oddity aside, biology aside, it is all about love of this child and as long as that's present, everything else is really going to be normal."

CNN anchor John Roberts complained in an October 15 interview to Media Life magazine about the "Media Research Council" (he meant Media Research Center) giving him an award in 2001 for being one of the most liberally biased journalists during George W. Bush's first 100 days in office.

In the interview, Roberts labeled himself an "equal opportunity holder of feet to the fire," and lamented that "within the first 100 days [of the Bush administration], the Media Research Council [sic] named me the worst White House correspondent because I was so unswervingly tough on the new administration."

Roberts, who hosts CNN's "American Morning," crowed about his network's "intense desire" to provide "nonpartisan, non-biased information." He argued that he proved his independence during the 2000 campaign: "President Bush later shook my hand, I think saying thanks for being so tough on the Al Gore campaign."

Retiring ABC journalist Lynn Sherr is trashing Republican vice presidential candidate Sarah Palin as not enough of a feminist. “What, exactly, has she done legislatively for other women? What paths has she forged?” Sherr asked TVNewser columnist Gail Shister in an interview published Tuesday morning.

“She seems to have turned it [feminism] on its head. She doesn't seem to care about bringing along other women with her,” Sherr complained as she packed up her ABC News office.

Sherr’s feminist credentials were on display at ABC a dozen years ago when she tossed out the results of her own network’s scientific poll to advance her thesis that the popular culture makes women feel bad about their breasts.

As MRC’s MediaWatch reported at the time (in a NewsBite headlined “Stacked Reporting”):

In a September 19 "Good Morning America" preview of a report scheduled to appear on the same day's edition of ABC's "20/20," chief investigative reporter Brian Ross took a few jabs at the rich who had fallen.

Ross called it "the end of a shameful chapter of American history," and although top executives on Wall Street had been hit hard in a way "they never thought was possible ... it's hardly the soup kitchen."

There was also much indignation in the report over the assets of Richard S. Fuld Jr., chairman and chief executive officer of now fallen Lehman Brothers Inc., and Alan Schwartz, the CEO of now "busted" Bear Stearns.

Gibson Advanced to Palin What Hume Calls an Obama 'Dishonesty'

Speaking of “dishonesty” in McCain's TV ads, on Fox News Sunday Brit Hume pointed out Barack “Obama goes around claiming he's going to cut the taxes of 95 percent of the public, which is literally impossible” since “40 percent of American taxpayers don't pay any income tax,” but that hasn't stopped ABC (directly) and CBS (implicitly) in recent days from advancing that Obama claim as fact. Charles Gibson, in his third interview session with Sarah Palin excerpted on Friday's 20/20 and Nightline (see earlier NB item), stated that Obama will extend the “Bush tax cuts on everything but people who own or earn more than $250,000 a year -- cuts taxes on over 91 percent of the country.”

On Tuesday's CBS Evening News, Anthony Mason looked at how the Obama and McCain tax plans would impact three Ohio families, including Charles and Joi Beacham who earn $32,000. Mason asked them: “In terms of taxes, what do you want from the next President?” Joi, a school teacher with an astounding level of chutzpah, replied: “Relief.” Chutzpah because, as Mason only noted later (and deserves credit for doing so unlike many of his colleagues over the years), the Beachams “paid no taxes in 2007.” Nonetheless, Mason proceeded to report how the Beachams would benefit more from Obama than McCain since they “would see no change in their taxes under McCain, but the Obama plan would help them” because they would get refundable credits and thus “receive a check from the government for more than $2,200.”

On 20/20, Gibson More Aggressive on Taxes, Abortion and Guns

In portions of Charles Gibson's third interview with Sarah Palin aired on Friday's 20/20 and Nightline, but not earlier on World News, Gibson demanded to know why she and John McCain “keep saying” Barack Obama will raise taxes when he says he won't, followed up her wish that Roe v Wade be overturned by -- in a question left out of the ABCNews.com transcript -- contending “it's a critical issue for so many women. You believe women should not have that choice?” and after Palin expressed support for gun rights, he asserted “we spend billions of dollars a year every year treating people who are victims of gun violence” and pleaded, as if more gun control is the only solution: “Nothing we can do about that?”

As the two sat in Palin's Wasilla home, Gibson scolded her and McCain:

Why do you both keep saying that Obama is going to raise people's taxes? It's been pretty clear what he intends. He's talked about middle-class tax cuts, extending Bush tax cuts on everything but people who own or earn more than $250,000 a year -- cuts taxes on over 91 percent of the country. Why do you keep saying he's going to raise people's taxes?