Another Day, Another Softball MSNBC Interview with Perez Hilton

MSNBC's Contessa Brewer stated yesterday after pageant owner Donald Trump proclaimed Carrie Prejean would continue her reign as Miss California, that the controversy over her defense of marriage as one man and one woman "is a good jumping off point for a conversation about same-sex marriage, about hypocrisy."

Based on Brewer's softball interview with "celebrity gossip columnist" Perez Hilton, it's clear she does not want a conversation. She wants Prejean to apologize for her beliefs and to Hilton.

MSNBC anchor David Shuster continued his outspoken disdain for anyone that supports traditional marriage. Directly after Donald Trump announced Miss California Carrie Prejean could keep her title on May 12, Shuster asked "Can I vomit?"

In a typical rant, Shuster repeated his criticism of Prejean:

"Can I vomit right now? I mean, literally. Can I vomit?" Shuster said. "Doesn't this represent everything that is wrong with the superficial nature of these pageants? I mean, she talked about how women can make a difference in the world. She lied. She avoided taking personal responsibility. She blamed others whether it's Perez Hilton or the photographer."

During Trump's press conference Shuster commented on his Twitter page, "Prejean, who got cosmetic surgery before the pageant, just spoke of ‘how women can make a difference in the world.' Absolutely revolting."

In a clear attempt to smear Miss California Carrie Prejean for promoting traditional marriage, a photo hardly as suggestive as many lingerie ads was released on the Internet on May 4. The caption for the picture that appeared on The Dirty.com clearly showed that the intent was to embarrass and discredit Prejean for her view on the issue of same-sex marriage:

"Exclusive: Self-proclaimed bible thumper Miss California, Carrie Prejean, should start pointing the finger at herself for her own indiscretions. TheDirty.com has received exclusive images of the homophobic debutante that would clearly strip her of her Miss California crown. So much for being a good role model for the state of California Carrie. Looks like your Dirty photo shoot makes you a sinner too. I decided."

Celebrity blogger and gay activist Perez Hilton, who precipitated the controversy by questioning Prejean about gay marriage while he was judging last month's Miss USA pageant, also posted the photo on his blog and taunting:  "The Lord works in mysterious ways! Opposite marriage advocate Miss California, Carrie Prejean, topless and in some cute pink panties. Is that biblically correct????"

Prejean responded in a statement released to the media on May 4:

"I am a Christian, and I am a model. Models pose for pictures, including lingerie and swimwear photos. Recently, photos taken of me as a teenager have been released surreptitiously to a tabloid Web site that openly mocks me for my Christian faith. I am not perfect, and I will never claim to be."

It's likely a tired story to many by now, nearly a week after the Miss USA pageant and the controversy that ensued over Miss USA runner-up, Miss California Carrie Prejean's answer to a question from same-sex marriage activist and gossip blogger Perez Hilton, who was judging the event. However, it took CNN host and Washington Post media columnist Howard Kurtz to ask Hilton some of the pertinent questions surrounding his curious rage over her answer.

Hilton appeared on CNN's April 26 "Reliable Sources" and justified some of his vitriolic insults hurled at Prejean by saying that was just part of the vernacular he uses on his Web site. He didn't address the point some have made that his use of misogynist language might have been as equally or more offensive than how he perceived Prejean's answer at the Miss USA pageant.

"I was very angry," Hilton said. "And it's almost insulting to me that people expect me not to be outraged, when I am told I am a second-class citizen and shouldn't deserve the same rights that heterosexuals get." 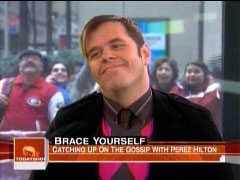 Nobody tunes into a beauty pageant and expects a public-policy discussion that could be mistaken for C-SPAN. The long-standing perception about the question-and-answer section at the end is that the aspiring beauty queens will uniformly voice their strong support for world peace, an end to hunger, and free lipstick and mascara for the homeless.

Is Donald Trump angry at Miss California Carrie Prejean? Or is it just another trumped up charge from the liberal media?

The April 22 episode of "Access Hollywood" teased viewers that Miss California was under a serious threat of losing her crown - since she was late for a meeting with Donald Trump, the organizer of the Miss USA pageant in which Prejean was the runner-up, and that her position on same-sex marriage somehow contradicted what Miss California's position was supposed to be.

"New and serious trouble for Miss California you will only find out here," "Access Hollywood" co-host Nancy O'Dell announced in the show's teaser.

(Video embedded below the fold)

During a panel discussion on Tuesday’s No Bias, No Bull program, Jane Velez-Mitchell, the Headline News anchor who replaced Glenn Beck after he switched over to the Fox News Channel, vehemently defended Perez Hilton’s crude remarks against Miss California USA Carrie Prejean. After TruTV’s Lisa Bloom blasted Hilton’s use of “the ‘B’ word and the ‘C’ word, that rhymes with ‘rich and runt,’” Velez-Mitchell replied, “Why is it that people should be very polite when they’re told that they’re second-class citizens?...If someone said to you...I don’t think you should have the right to get married, wouldn’t you be ticked off?”

The panel discussed the controversy between Prejean and Hilton, and besides Bloom and Velez-Mitchell, included CNN correspondents Erica Hill and Jessica Yellin, and anchor Roland Martin. Despite her criticism of Hilton, the TruTV anchor twice expressed her support for gay marriage. Velez-Mitchell herself is not an uninterested party on the wider issue of same-sex “marriage,” as she is an open lesbian who defended anti-Proposition 8 protesters during her Headline News program in November 2008: “I believe that gay marriage should be a right for all Americans. In other words, this should be ok across the country” .

April 17 marked the 13th annual "Day of Silence," a gay rights protest event sponsored by GLSEN (Gay, Lesbian and Straight Education Network) that takes place in schools across the nation. Of course, gay groups can afford to be silent for a day, because they have the mainstream news media to speak for them.

Predictably, the media covered this year's event in a positive manner, leaving little room for discussions of it as an indoctrination tool pushed on students by gay activists. And they certainly didn't report that the LGBT community and its allies don't have a problem with "name calling, bullying and harassment" when it's directed against people who disagree with them.

Perez Hilton on CBS, No Mention of Vulgar Insults of Miss California 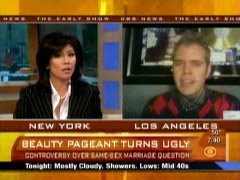 On Tuesday’s CBS Early Show, co-host Julie Chen talked to gay blogger Perez Hilton about his question to Miss USA contestant Carrie Prejean about gay marriage: "Miss California, Carrie Prejean, decided to tell gay blogger and judge Perez Hilton what she really felt about same-sex marriage, and it might have cost her the Miss USA crown...Hilton reacted angrily after the show, posting this video blog on his website." Chen played a clip of Hilton’s video blog tirade in which he said he was "disappointed" in Prejean, but not the portion in which the blogger called her a "dumb b***h."

Chen also failed to mention that during live coverage on MSNBC on Monday, Hilton declared that he was not sorry for using that language and even went on to say that he wished he had used the "c-word" to describe Prejean. Chen only vaguely alluded to Hilton’s vulgarity as she asked her first question: "Perez, let me begin with you. When you first heard her answer, what did you think? And please keep it clean, this is a live morning program."

"...i know i'm a journalist, and i should be objective...but she is an ignorant discrace and she makes me sick to my stomach," E! News anchor and managing editor Giuliana Rancic wrote on her Twitter page at 10:01 a.m. EDT today. Rancic of course was referring to Carrie Prejean, who in the interview portion of the Miss USA contest on Sunday evening gave a defense of traditional marriage that riled openly gay contest judge and gossip blogger Perez Hilton.

Rancic later clarified her earlier remarks in a Tweet a few minutes later:

sorry i wasn't clear...i was referring to miss california as a disgrace. life is short. everyone deserves to love & be loved.

The E! network journalist appears to be cribbing from that great philosopher Miley Cyrus, who on April 20 declared:

Want to appear as a champion of a cause without being held to account for the hateful name-calling you did in the name of your cause? Appear on CNN's "Larry King Live."

Perez Hilton, author of the celebrity gossip site PerezHilton.com, who advocates that gay marriage should be legal, got to do just that. Hilton, coming off his appearance as a judge for the Miss USA pageant on April 19, appeared on Larry King's April 20 CNN broadcast and explained why he asked Miss California, Carrie Prejean, what she thought of gay marriage (video embedded below the fold):

"Well, I was given the opportunity, on this national platform to ask a question that I thought was relevant. And given the recent setbacks and advances that we've made in the fight for gay marriage, I thought it was a very important question for me specifically to ask."

Let's get this straight [pardon the pun]: A beauty contest contestant with a conservative view on same-sex marriage upsets an openly gay blogger with her answer to his question about her thoughts on the issue. Yet in reporting the story, ABCNews.com paints her as the bad guy for offending the celebrity judge, while failing to mention that a majority of said beauty queen's fellow Californians agree with her views.

Welcome to the saga of Carrie Prejean, Miss California, whom ABCNews.com describes as having "floored" gossip blogger Perez Hilton, who went on to "skewer" the Miss USA runner-up for her honest answer in an angry video blog entry.