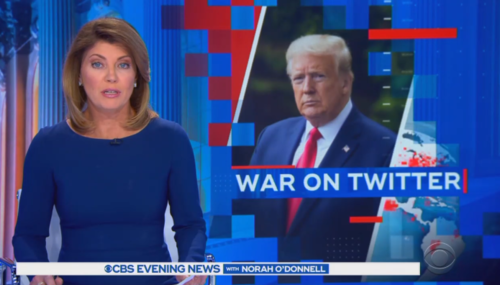 Nicholas Fondacaro
While Twitter targeted President Trump with fact-checks, the CBS Evening News and NBC Nightly News scoffed at his understandably angry reaction on Wednesday. While they were amused by him fuming at his favorite social media platform, neither of them cared to report how Twitter’s in-house fact-checker was an anti-Trump activist who had leveled many false accusations against the… 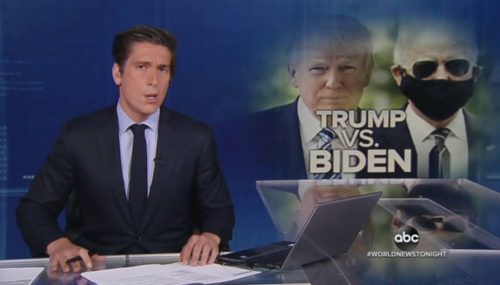 Nicholas Fondacaro
The liberal media clutch their pearls when President Trump levels criticisms, nicknames, and insults against his political opponents. But when it’s the other way around, they celebrate it. A couple of hours before the evening newscasts aired on ABC, CBS, and NBC, presumptive Democratic nominee Joe Biden took part in a softball interview on CNN. What piqued the interest of the broadcast… 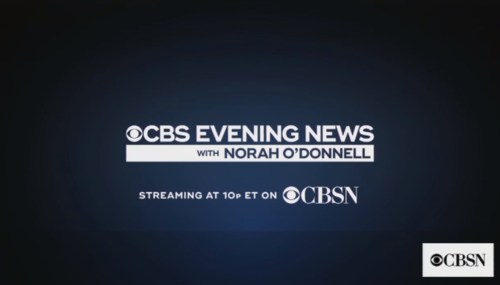 Nicholas Fondacaro
Any routine viewer who tuned into watch CBS Evening News at 6:30 p.m. Eastern Tuesday night immediately knew something was amiss. By 6:31, anchor Norah O’Donnell would normally be delivering the opening teases. But by 6:32, the commercials were still running and they were all for CBS entertainment properties. It wasn’t until 6:34 when the commercials ended and CBSN, the network’… 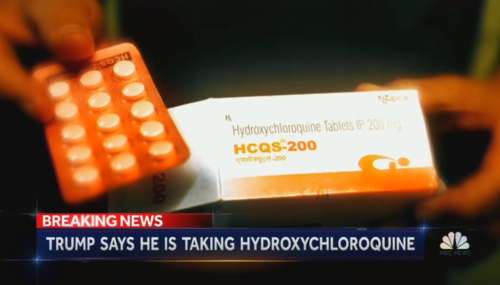 Nicholas Fondacaro
Even though the FDA says the use of Hydroxychloroquine was up to a patient and their doctor, Monday’s evening newscasts saw ABC, CBS, and NBC clutch their pearls after President Trump admitted he’s been taking the anti-Malaria drug for several days to prevent catching coronavirus. Acting as though he was self-medicating and not telling viewers that the drug needed a prescription to… 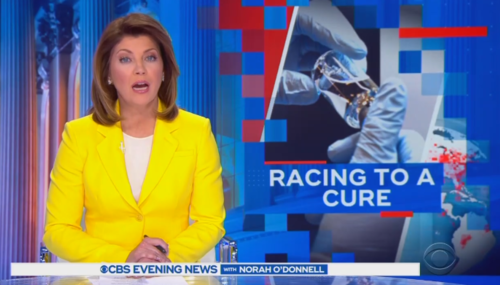 Nicholas Fondacaro
What makes a crisis, such as the one we’re all living through, worse is when the public gets mixed and/or conflicting messages about what to expect. This causes confusion and anxiety. And that’s exactly what the broadcast networks of ABC, CBS, and NBC have been creating with the cognitive dissonance plaguing their evening news reports, which reach millions of people.

Nicholas Fondacaro
Nearly two and a half years after accepting a plea deal because he was entrapped by anti-Trump FBI investigators, former General Michael Flynn saw light at the end of the tunnel Thursday. After the case was reviewed by the Department of Justice, Attorney General William Barr order the case be dropped citing the fact Flynn had not lied about anything material or central to the Russia investigation… 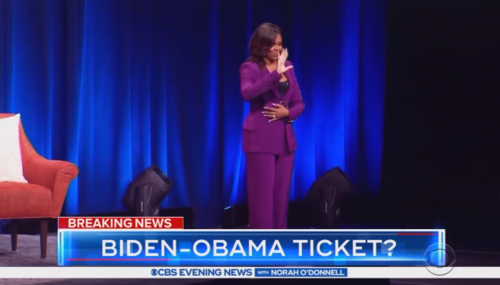 Nicholas Fondacaro
It exposed just how warped their news judgment was. While America was still suffering from the coronavirus and with new symptoms appearing in children, CBS Evening News set aside time Wednesday to fawn for former First Lady Michelle Obama’s new documentary and hype Democratic calls to have her become Joe Biden’s running mate. There was no mention of the rape allegation against the… 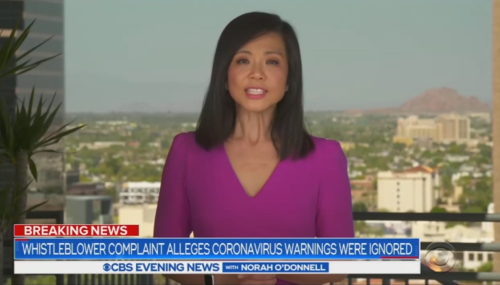 CBS/NBC Flock to Whistleblower Complaint Despite Claim Being Debunked

Nicholas Fondacaro
Almost two weeks ago, the liberal media pounced on claims from a former HHS official who claimed, without evidence, that he was fired for not pushing hydroxychloroquine. Well, that official was back in the news Tuesday because he filed a whistleblower complaint. But this time, Dr. Rick Bright added on new claims he didn’t tell the press about before now. CBS Evening News and NBC… 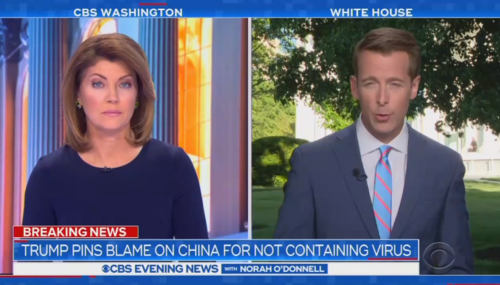 Nicholas Fondacaro
No matter how the liberal media tried to spin it, China is to blame for unleashing the coronavirus on the world. But on Monday, the CBS Evening News once again rushed to defend one of America’s adversaries by blaming President Trump for the coronavirus death toll in the U.S., and decrying how he was correctly blaming China for the pandemic’s devastation. Meanwhile, Fox News was… Nicholas Fondacaro
While Wednesday’s CBS Evening News was the only broadcast newscast to report on the stock market’s rally following a breakthrough with coronavirus-fighting drug Remdesivir, they threw cold water on anyone who dared to have hopeful thoughts about the economy improving. 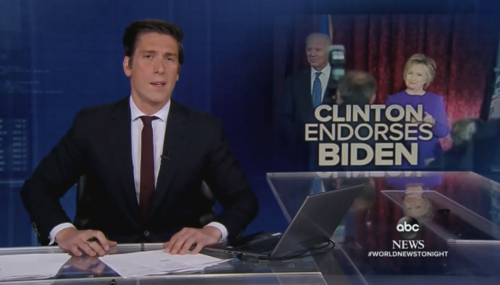 Nicholas Fondacaro
It was one of the most predictable developments on the Democratic side of the 2020 presidential election: two-time presidential flunky Hillary Clinton endorsed former Vice President Joe Biden. But that didn’t stop ABC’s World News Tonight from fangirling Tuesday and declaring it “another big milestone” for the campaign. At the same time, ABC News and CBS Evening News… 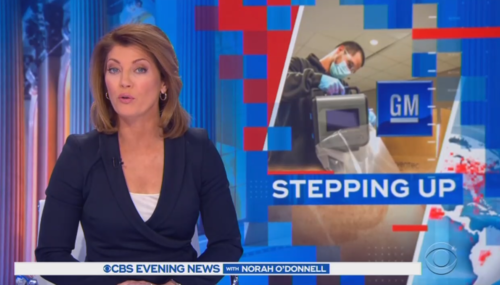 Nicholas Fondacaro
A month after President Trump had invoked the Defense Production Act calling on General Motors to manufacture ventilators for the coronavirus crisis, CBS Evening News refused to acknowledge that fact as they praised to automaker on Monday. This came after the newscasts had repeatedly insisted the Trump administration wasn’t doing anything to have desperately needed equipment made here at… 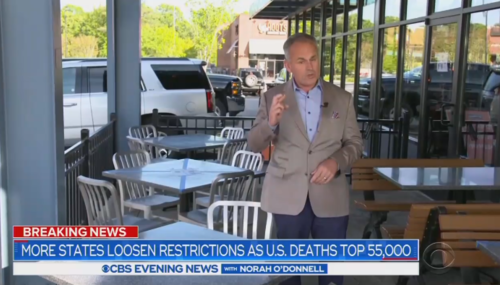 Nicholas Fondacaro
There's perhaps nothing more elitist than major national journalists whining about unemployed people getting their income back since they don’t need to worry about losing their jobs overnight. But the elitist anger of CBS Evening News and NBC Nightly News notably only found select targets Monday night: red states, while states ran by Democrats were largely sheltered from… 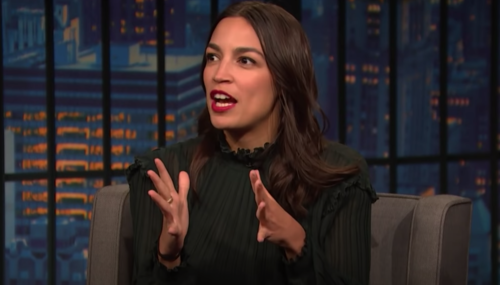 Business
Joseph Vazquez
When the price of U.S. oil crashed below $0 on Monday, lefty Rep. Alexandria Ocasio-Cortez (D-NY) sent out a disgusting tweet praising the coronavirus-induced crash. She later deleted the tweet, and the cat caught all three major evening news broadcasts by the tongue. AOC’s vile tweet was a response to another tweet suggesting that “oil producers have to pay people to take [the oil]…