NewsBusters is showcasing the most egregious bias the Media Research Center has uncovered over the years — four quotes for each of the 25 years of the MRC, 100 quotes total — all leading up to our big 25th Anniversary Gala on Thursday, September 27.

Click here for blog posts recounting the worst of 1988 through 2007. Today, the worst bias of 2008: Keith Olbermann shrieks at President Bush to “shut the hell up!” while his colleague Chris Matthews gets a tingle over hearing Barack Obama: “I felt this thrill going up my leg. I mean, I don’t have that too often.” [Quotes and video below the jump.]

Each morning, NewsBusters is showcasing the most egregious bias the Media Research Center has uncovered over the years — four quotes for each of the 25 years of the MRC, 100 quotes total — all leading up to our big 25th Anniversary Gala on September 27. (Click here for ticket information)

Already this week, we’ve published the worst quotes of 1988, 1989 and 1990; today, the worst bias of 1991. Highlights include journalists saluting Anita Hill while disparaging Clarence Thomas (“if you gave Clarence Thomas a little flour on his face, you’d think you had [former KKK Grand Wizard] David Duke talking”), and a Boston Globe arts critic writing about patriotism: “Oh, say, we’ve seen too much. The Star-Spangled Banner pushes like a cough through America’s mouth...”

Time, Newsweek Defensively Backed Out of Weinergate and Scorned Our 'Pitiless Prurience'

Since we disposed with the notion that the networks had a feeding frenzy on the Anthony Weiner scandal, what about the news magazines? They began with a whimper, but then that week’s magazines were summer double issues. After the week off, what happened in their June 27 issues? Not much.

Newsweek didn’t offer a down arrow in their “Conventional Wisdom” column, but they gave an up arrow to “GOP Fringe,” arguing “Perry, Bachmann, and Paul show screwballs’ strength.”

Time's Nancy Gibbs celebrated the birth control pill's 50th anniversary in her May 3 cover story by hailing the greater employment opportunities for women that resulted from its wide-spread use. But she failed to explore the downsides of it.

The Pill became widely available in 1960, first to married women who wanted to control their fertility and later, to single women. And though the 1960s led to the sexual revolution, Gibbs claimed that it wasn't the Pill itself that caused the "liberalization of attitudes" regarding sexuality. However, the anecdotes she included in the article discredited that argument.

"Margaret" told Gibbs her thoughts about sex with her boyfriend (who refused to wear a condom) before and after going on the Pill.

"I was too scared of getting pregnant to risk using nothing though he tried to convince me," explained Margaret. According to Gibbs taking the Pill "was a revelation" for Margaret. "The second I went on the Pill," she continued, "all the mess and worry and holding my breath every month to see if I got my period was completely lifted off my shoulders. I wish I had used it from the get-go. You forget how that anxiety can rule your life."

Spin of the Year: Time Touts Bill Clinton as More Devoted to Chelsea Than to Power

Bill Clinton is engaged in a major rehabilitation project with historian and personal friend Taylor Branch. Time magazine is eager to help: eager enough to boast that Bill Clinton was a terrific father, and cared more about his daughter Chelsea than his job in the White House.

You want a blatant example of the Old Media's over-the-top, gobsmacked love affair with Obama? Well, one would be hard pressed not to see Time Magazine's latest piece by Nancy Gibbs as a perfect example of the media ignoring all ills and of projecting only what is wonderful onto the dearly beloved as this piece represents. The lionization of Obama is bad enough, but the selective memory of the writer is even more appalling.

Writer Gibbs begins her column trying to "place" Barack Obama in a "cultural map." Most famous people are remembered for a certain place that formed their inner core, of course, and Gibbs tries to pinpoint that place for several presidents including Obama. She pegs Ronald Reagan to Hollywood, Clinton to Hot Springs and W. to Texas. But where does she place Obama?

Time’s Nancy Gibbs has found the true home of President Obama, and it’s not Kenya or Kansas. "None of these quite fit our blender in chief, but it struck me recently that Obama does have a cultural home: he's the first President from Sesame Street."

The back page of this week's Time magazine is an essay by editor-at-large Nancy Gibbs on the new Gallup abortion poll. Gibbs reasonably wonders about why a majority of Americans now say they're pro-life. She even bows to the notion that the GOP's "message on abortion is closer to the mainstream than Democrats care to acknowledge."

In the Life Magazine book of commemorative photographs titled The American Journal of Barack Obama, a set of essays in the back recount Obama’s life and triumphs. Time Senior Writer Nancy Gibbs, who recently compared Obama in Time to a prince born in a manger, championed Obama’s breaking the chains of religious conservatism in American life. His ascent marked "a growing consensus that something had gone wrong, that the phenomenon of politicians nailing campaign posters on the gates of heaven and laying exclusive claims to God’s designs was unwise, unfair, even unholy."

She even transformed Obama into a secular savior, leading "the kind of mass revivals that used to sweep across the prairie and set souls on fire... Obama was busy building a new church, looking for the seekers, those who had lost their faith in politics or never had any in the first place, and he invited them home."

Time magazine hasn’t devoted a single article to Attorney General nominee Eric Holder yet. (He’s drawn one short mention since being nominated.) This is a big change from eight years ago, when Time had a blazing cover story on George Bush nominee John Ashcroft. With a close-up of Ashcroft’s half-darkened face peering out with a one-eyed Cheneyesque glare, Time asked SHOULD THIS MAN BE ATTORNEY GENERAL? 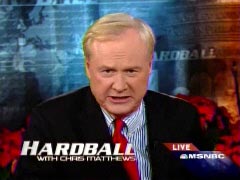 Sean Hannity marks 2008 as the year journalism died. But it could just as easily be the year journalism felt a thrill going up its leg. That Chris Matthews announcement in February, that a Barack Obama speech caused him a mild ecstasy, represented the everyday "mainstream" media view. Reporters didn’t so much produce "news" during this election year as they tried to make a sale.

Time Mag: Obama a 'Prince' Like Jesus Born of 'Imagination, History and Hope' 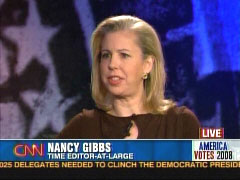 Warning its readers to “be prepared to gag,” the “Scrapbook” page of this week's Weekly Standard magazine recited “some of the worst over-the-top reactions to The One's ascendance,” starting with Time's Nancy Gibbs who opened this week's cover story by comparing Obama with Jesus: “Some princes are born in palaces. Some are born in mangers. But a few are born in the imagination, out of scraps of history and hope...” In the November 17 issue, she heralded (citing his full name) the greater meaning of Obama's victory:

Barack Hussein Obama did not win because of the color of his skin. Nor did he win in spite of it. He won because at a very dangerous moment in the life of a still young country, more people than have ever spoken before came together to try to save it. And that was a victory all its own.

She gushed over how “an election in one of the world's oldest democracies looked like the kind they hold in brand-new ones, when citizens finally come out and dance, a purple-thumb day, a velvet revolution.”