NBC Most Excited by Palin’s E-Mail, Yet Fails to Dig Up Any ‘Bombshells’

Much of the media made fools of themselves with their excited obsession over the release of Sarah Palin’s gubernatorial e-mails, but NBC News went the furthest, sending, as did CNN, reporters to Juneau as the network uniquely led its Friday night newscast by hyping the non-news as a major event. “On the broadcast tonight,” anchor Lester Holt heralded, “mail call. Thousands of pages of e-mail from Sarah Palin's time as Governor. What we're learning about her tonight.”

Following a story from “national investigative correspondent” Michael Isikoff in which “MSNBC.com investigative reporter” Bill Dedman had the gall to complain “we waited longer for these records than Sarah Palin was Governor, almost a thousand days,” NBC’s David Gregory recognized, in an understatement: “As Mike and his team are finding, not a lot of bombshells here.”

At the top of Friday's NBC Today, co-host Matt Lauer declared that it "could be a tough day for potential presidential candidate Sarah Palin. We're live in Alaska, where thousands of her e-mails as governor there will be released today." Later, fellow co-host Ann Curry introduced a report on the upcoming release by proclaiming that Palin was "about to face a new political minefield."

Without having seen a single email, national investigative correspondent Michael Isikoff argued that Palin "may now be facing a storm." The headline on screen throughout the segment read: "Problems for Palin? Thousands of E-mails to be Released."

Teasing a story on former House Speaker Newt Gingrich entering the presidential race at the top of Thursday's NBC Today, co-host Meredith Vieira proclaimed: "Political hurdle. Newt Gingrich launches his run for the White House, but will his two divorces and an admitted affair during his time as House speaker hurt his chances of becoming president?"

Later, fellow co-host Matt Lauer introduced a report on Gingrich by declaring: "He is perhaps the best known Republican in the field to date. But Gingrich also has a messy personal life that includes two divorces, three marriages, and a lengthy affair." Correspondent Michael Isikoff described how, "Everywhere he goes, Newt Gingrich hears the questions [about his personal life]....Gingrich, who once campaigned as a family values candidate, has been dogged for years by criticism of marital infidelity..."

Potential presidential candidate Donald Trump, whose controversial stance on President Obama's birth certificate has made waves in the mainstream media during the past weeks, for one reason or another, has avoided interviews on CBS's morning and evening news programs so far in 2011. In fact, Trump hasn't done an interview on either The Early Show or CBS Evening News in over two years.

NBC and CBS Tout Prank Call on Gov. Walker as 'Evidence' He Wants to 'Crush Unions'

On Wednesday's NBC Nightly News, correspondent Michael Isikoff claimed a prank phone call on Wisconsin Governor Scott Walker "provided his critics with evidence that his real motivation is what they've been saying all along, to crush public unions." On Thursday's CBS Early Show, co-host Erica Hill declared the "embarrassing" call revealed Walker's "plan for putting pressure on the big unions."

Isikoff suggested that Walker's private phone conversation with Ian Murphy of the left-wing Buffalo Beast website (who was pretending to be billionaire donor David Koch) ran counter to the Wisconsin Governor's public statements on his budget-cutting proposal: "Publicly, Governor Scott Walker has insisted the standoff over union rights in Wisconsin is all about saving money." On the Early Show, correspondent Dean Reynolds proclaimed: "Walker is heard discussing strategy to force Democratic senators to return to Wisconsin and vote. In another exchange, he tells of plans to punish state workers with layoffs."

Chris Matthews has a new obsession for 2011 and her name is Michele Bachmann. Matthews has gone after Bachmann with the same fervor he used to reserve for Dick Cheney and on Thursday's Hardball he mocked the Minnesota Republican Congresswoman's new appointment to the House Intelligence committee as he snidely observed: "This is great irony here, on the Intelligence committee. I wonder what the rules are for getting on that committee? I guess they're pretty lenient."

Matthews also questioned Bachman's motives for getting involved in public service as he asked The Daily Beast's Shushannah Walshe about a profile she wrote about Bachmann that touched on her religious beliefs:

MATTHEWS: Well what is the religious piece here because I don't want to push it too hard, but is there a kind of Joan of Arc thing going on here? The way you write that piece makes it sounds like she's on a kind of crusade. I'm serious. Almost a Messianic goal here, which goes beyond what we normally consider politics in America.

Matthews: Bush Should Be Given A Lie Detector To Find Out Why He Invaded Iraq

Chris Matthews' renewed attacks on George W. Bush continued Tuesday as he accused the former President of having no real motive to go to war with Iraq in March 2003.

Implying that Bush was basically an idiot that was "in over his head," the "Hardball" host stated, "Maybe you ought to put this guy in a lie detector" (video follows with transcript and commentary):

Thursday's NBC Nightly News led, yes led, with a lame attempt to advance the desperate Democratic spin about the “secret fortune” going into campaign ads leading to “a return to the days before Watergate, Wild West days,” a story anchor Brian Williams touted as containing “exclusive new information,” but which merely passed along stale and vague generalities suggesting some sort of vast right-wing conspiracy in efforts to dare exercise the same unfettered free speech rights practiced by NBC News.

“Tonight, we have exclusive new information about the enormous amount of money, a kind of secret fortune that has been flowing into congressional campaigns in these mid-term elections,” Williams ominously announced at the top of his newscast. Reporter Michael Isikoff, fresh from Newsweek, intoned:

In the last couple of weeks, Brian, money, special interest money has been pouring into a network of outside political groups that are really at really unprecedented levels. This is a network, the primary network is being run by Karl Rove....They are expecting to raise $250 million to flood the airwaves in these last few weeks of the election....And here's what's significant, Brian. Most of this money is coming from big fat cat donors, wealthy donors, and it's not being disclosed. Secret money pouring into American elections. 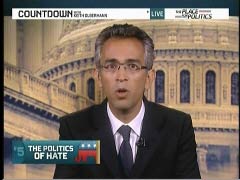 Appearing as a guest on Friday’s Countdown show, MSNBC political analyst Richard Wolffe – formerly of Newsweek – referred to the debunked story that was retracted by Newsweek in May 2005 which had incorrectly claimed that American interrogators at Guantanamo Bay had flushed a Koran down a toilet to intimidate Muslim prisoners. But Wolffe did not inform viewers that the story was untrue as he accused conservatives of a double standard for criticizing Newsweek’s inaccurate Koran desecration story from 2005 while not being aggressive enough in condemning Pastor Terry Jones’s declaration that he would burn the Koran on September 11. Wolffe:

I'm struck all the time with this story about the experience of those of us who worked in Newsweek – not the least of whom is Mike Isikoff now at NBC News who wrote a story about the abuse of the Koran in Guantanamo Bay, and there were riots and people died and the overwhelming torrent of abuse from conservative, the echo chamber, more than elected officials I think, certainly from conservative media, was that Newsweek had lied and people died. That's what they said.

Newsweek’s erroneous story inspired riots and a significant number of deaths in 2005 before it was retracted by the magazine, although, as previously documented by the MRC, Newsweek buried its retraction.

Posing the question, "Will Gun Measure Threaten Amtrak [with] Terror Attacks," Newsweek's Michael Isikoff informed readers of a legislative battle to allow passengers aboard Amtrak to transport unloaded firearms in their checked luggage.

Isikoff pitted supporters of gun rights, particularly the National Rifle Association (NRA) against "security-minded" legislators worried about gun use in terrorist attacks on the nation's railways:

Just how much clout does the gun lobby have on Capitol Hill? This week may prove to be a crucial test: A House-Senate conference committee is about to take up a massive transportation-funding bill that is pitting advocates of gun rights against security-minded members worried about the threat of terrorist attacks on Amtrak trains. Tucked into the measure is a controversial National Rifle Association-backed amendment that would cut off $1.5 billion in subsidies to Amtrak unless the federally backed national passenger-train company reverses its post-9/11 security policies and permits train passengers to travel with handguns and other firearms as part of their checked luggage.

If only Rachel Maddow watched her MSNBC show when someone else is guest hosting, she might avoid inconvenient juxtapositions.

The first part of the embedded clip shows Maddow on Aug. 31 taking aim at former vice president Dick Cheney's unapologetic defense of Bush administration tactics against al Qaeda and the war in Iraq. 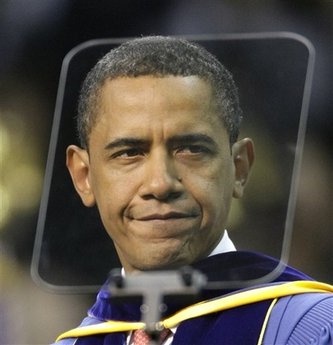 In today's "You're Not Going to Believe This" segment, Barack Obama has gone back on his promise of creating an open and transparent administration, and the good folks at Newsweek not only noticed it, but reported it.

Yes, the magazine that seems to have Obama on its cover every week actually exposed the object of their affection for not only going back on a campaign promise, but also for contradicting his own highly-publicized decree made the first full day he was in office.

Maybe even better, the author, Michael Isikoff, was the same reporter who was about to break the Monica Lewinsky story in January 1998, but was stopped by Newsweek higher-ups.

Readers are advised to tighten their seatbelts and prepare themselves for an alternate media reality: