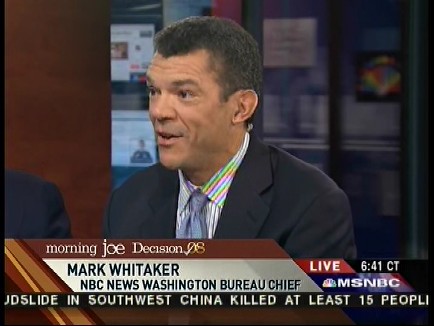 The number two man at NBC News believes Barack Obama's skin color gives him more legitimacy around the world than possibly any American leader in history.

For those unfamiliar, Mark Whitaker is the Senior Vice President that succeeded the late Tim Russert as NBC's Washington Bureau Chief, and currently oversees national and international reporting for all the network's news programs including the "Nightly News," the "Today" show, MSNBC, and "Meet the Press."

Thanks to Sarah Palin, the culture war has become a civil war—on the left. Mika Brzezinski bravely opened a new front in the conflict during today's "Morning Joe," repeatedly going after two female MSMers for suggesting Palin is taking the working-mom thing too far.

And, mirabile dictu, Mika even admitted to sensing MSM unfairness to Republicans.

"This is an argument Joe and I have about fairness and whether or not there are some sort of underlying unfairness when it comes to Republicans. And I just, you know, I feel it here,"  Brzezinski said referring to a Wall Street Journal op-ed by Katty Kay and Claire Shipman. Full text and commentary after the jump. View video here. 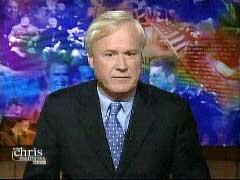