As promised, following its launch last week, the Media Research Center’s new Hispanic media arm, MRC Latino, is conducting ongoing analysis of the news coverage on the country’s top Spanish-language television networks. In this space, as well as bilingually on the Facebook page and Twitter account of MRC Latino, we’ll be calling out instances of slanted, incomplete or inaccurate news coverage on these networks as we see it, as well as pointing out especially well-done news stories, whenever merited.

Along those lines, it’s worth noting that in the days since MRC Latino’s launch, there have been some indications of an uptick in participation by conservative leaders being quoted or cited in major Spanish-language media news stories, including those covered by the flagship national evening news programs of Univision and Telemundo (the subjects of MRC Latino’s initial study).

The section sparking everyone’s attention came when Ramos – self-respecting enough to offer more than the piffle a Ronan Farrow offers on MSNBC – asked when life begins for Richards. She labored mightily not to answer, since abortion advocates eschew science and believe that women should be able to abort even AFTER a child is born:

Instead of airing Latina Governor Susana Martinez's speech at the Republican National Convention, ABC chose to host liberal Univision anchor Jorge Ramos who had dire words for the Republican Party.

"I think Republicans have a real, real challenge trying to get Latinos. Because just a few words in Spanish from Susana Martinez over principle is not enough," warned Ramos while ABC showed video of Martinez speaking. "[I]if they insist on talking about immigration, they're going to lose even more of the Hispanic vote," he also said.

Though the Supreme Court overturned much of the Arizona law, but not the part the liberals and their media friends loathed the most, it wasn't hard to predict the networks would once again line up with the amnesty lobby. ABC's Diane Sawyer mourned "the most inflammatory part of the law" was upheld.

Once again, those impartial network producers are making themselves the sob sisters of illegal aliens. ABC found a man who carries a document in his glove compartment insisting that if he's deported, his children shouldn't go into foster care. NBC put on a woman watching cartoons with her cute little kids, wearing a T-shirt saying "Arrest [Sheriff Joe] Arpaio, Not the People." Reporter Savannah Guthrie predicted more lawsuits to repeal the one section the court upheld – because liberals never accept defeat. It's so predictable.

The Supreme Court’s decision to uphold the law requiring Arizona law enforcement to check the immigration status of those they suspect are illegal is “very disappointing and very dangerous,” represents “a very sad day for the Hispanic community” and “will only create more persecution and discrimination” while “the last hope is gone.”

So contended not a left-wing activist, but a “news anchor” in the guise of one given a platform on Monday’s ABC World News.

Univision anchor Jorge Ramos has been treated as a major p 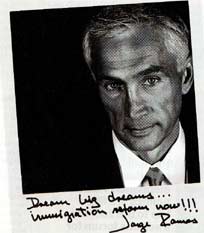 undit on TV roundtable shows (and even mocked as an “Obama stalker” and CNN debate questioner on Saturday Night Live during the primaries in 2008). Ramos sees zero distinction between journalist and liberal advocate, which comes across in Time’s 10 Questions interview in the August 9 issue. He scribbled in “immigration reform now!!!” under his picture for the magazine and tried to argue the Declaration of Independence also includes inalienable rights for illegal aliens:

As a Mexican-born, naturalized U.S. citizen, what is your take on the immigration debate?  -- Ndukwe Kalu, Los Angeles

The Declaration of Independence says that all men are created equal, but right now millions of men and women in Arizona and in other parts of the U.S. are not being treated as equals, and I can't believe that. Countries are judged by the way they treat the most vulnerable, and the most vulnerable population in the U.S. right now is undocumented immigrants.

Time's questioner wasn't thinking about Ramos telling reporters that on some rare occasions he's been "torn between being a journalist and being a Mexican." Time didn’t find anyone to ask how the “most vulnerable” are treated by countries like Mexico, whose immigration policies are much harsher. Time found no one to ask if he thinks fairness and balance should completely bow to Latino-left advocacy.

Calls to ‘Rein in the Federal Government’ Are ‘Not Very Rational,’ Al Hunt Declares on ABC 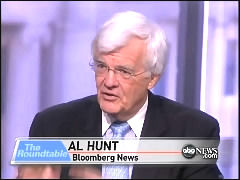 “The side that talks about the need to rein in the federal government” is “not very rational,” yet “is winning” the debate over whether to pass another “stimulus” bill, Al Hunt regretted on Sunday’s This Week on ABC.

The former Washington Bureau Chief for the Wall Street Journal, who’s Washington Editor for Bloomberg where he hosts Bloomberg TV’s Political Capital show, fretted over how “right now, that argument – that we have to rein in because the stimulus didn’t work -- well, I think most economists would say the stimulus did work in the sense it would have been a lot worse if there hadn’t been one.”

Hunt’s assessment came in reaction to an outnumbered Dan Senor, the lone voice on the panel against additional government spending to spur the economy and who warned of a Greece in our future. New York Times columnist Paul Krugman charged the 2009 stimulus bill wasn’t big enough and proposed that in the face of a likely $20 trillion debt in ten years, “whether we borrow another $500 billion now” is “really trivial,” Cynthia Tucker of the Atlanta Constitution yearned for a new “robust stimulus” and Jorge Ramos of Univision declared: “We need more government intervention.”

The most biased interviewer that President Obama faced on Sunday was surely Univision's Jorge Ramos, whose advocacy for illegal aliens is flagrant. Objectivity is not in his vocabulary. Neither is "illegal." Jerry Kammer of the Center for Immigration Studies explained:

On Monday’s CBS "Early Show," co-host Maggie Rodriguez reported from California and touted her role as emcee at the annual conference for the liberal Hispanic group La Raza: "The conference for the National Council of La Raza, the country's largest Hispanic civil rights and advocacy group. Yesterday I hosted the luncheon in San Diego where Senator Barack Obama spoke to a crowd of thousands. Later today I will host the one where Senator McCain will be speaking."

At the top of the show, Rodriguez teased the segment by proclaiming: " Both John McCain and Barack Obama are reaching out to this voting bloc. And ahead this morning I'll tell you the 45 million reasons why they both covet the Hispanic vote." Later during the segment Rodriguez continued to emphasize the importance of the Hispanic vote: "From coast to coast, in countless corners of American cities, the Latino influence is undeniable. Latinos are the largest minority in this country. 45 million strong and growing. By 2050 that number's expected to almost triple to 128 million. And a growing Latino population means more influence for Latino voters."

Following that observation, Rodriguez played a clip of Arturo Vargas, Executive Director of the National Association of Latino Elected Officials, praising past immigration protests in the Hispanic community: "In 2008 we're culminating on several years of activism and mobilization of the Latino community. Just look back two years ago, with the 2006 marches, where millions of people took to the streets, many of them young people, who said today we march, tomorrow we vote. Well, tomorrow has arrived."