CBS This Morning journalists on Wednesday pushed a new San Francisco tax on buses as a symbol of "income inequality" and failed to identify a liberal organization supporting the move. The progressive city approved a $1 per stop tax on tech company buses that transport employees to the Silicon Valley. CBS journalist John Blackstone lectured, "The private buses have become symbols of income inequality and the belief that well paid tech workers are to blame for steeply rising rents." [See video below. MP3 audio here.]

Talking to Cynthia Crews, identified in the segment as a "San Francisco resident," Blackstone sympathized, "So, a dollar a stop doesn't seem like much." Blackstone featured Crews insisting, "The shuttles, the tech companies are not paying their fair share." According to the Canadian Globe and Mail, Crews is "a representative of the San Francisco League of Pissed-Off Voters." That group's website features endorsements, like this one for city attorney: "A progressive City Attorney would have more guts to stand up to the fat cat companies...who get way too many breaks in this town."

O'Donnell later underlined "the decision that could...open new doors for millions." John Blackstone featured two soundbites from the new lawyer – Sergio Garcia – whose parents "brought him here illegally from Mexico when he was 17 months old," but none from opponents of the ruling [MP3 audio available here; video below the jump].

Scott Pelley hyped the latest United Nations global warming report on Wednesday's CBS Evening News, proclaiming that "climate scientists have never seen greenhouse gas readings like what they announced today....scientists with the United Nations said that greenhouse gases, which influence climate change, have hit their highest level in 800,000 years – mostly because industry is ramping up in the developing world".

John Blackstone underlined the supposed apocalyptic nature of this finding. He asked a University of California, Berkeley researcher Daniel Kammen if it was "too late" to do anything about climate change. However, Blackstone failed to mention that this sole talking head has advised President Barack Obama on energy policy. He just noted Kammen's academic affiliation: [MP3 audio available here; video below the jump]

Hillary's Questionable Handling of Benghazi A Passing Thought For CBS

John Blackstone promoted Hillary Clinton's potential 2016 presidential run on Tuesday's CBS This Morning, and minimized the ongoing questions about her leadership before, during, and after the September 11, 2012 Islamist attack on the U.S. compound in Benghazi, Libya. For opposition, Blackstone merely noted that "a new ad, just released by the GOP, criticizes Clinton's handling of the terrorist attack in Benghazi", without further explaining the issue.

The correspondent also buried the staunchly pro-abortion and partisan stance of Emily's List. He vaguely labeled the pro-Democratic PAC a "group that promotes women candidates."

On Sunday's CBS Evening News, John Blackstone spotlighted the sob story of fourth graders who are lobbying President Obama to allow the return of their former classmate, Rodrigo Guzman, who was deported with his family back to Mexico. Blackstone sympathized with the schoolchildren who "hope to visit Washington, to personally lobby for Rodrigo's return."

The correspondent trumpeted the children's cause: "The students' activism shouldn't be surprising, perhaps, in a class where they've been studying civil rights leaders." The only soundbites that Blackstone played during the report came from the fourth grade teacher and students at Guzman's former school in the leftist enclave of Berkeley, California [audio available here; video below the jump]

NBC has yet to cover a major shift by the Obama administration that would halt deportation of illegal immigrants who have not committed a crime. According to the Washington Times, up to 300,000 cases could be impacted by this decision.

Despite ignoring the development, NBC did find time to cover the story of Boris, the 550 pound pig. Natalie Morales explained, "His owners have him on a diet and he's dropped an impressive 75 pounds."

CBS's John Blackstone apparently couldn't find many opponents of imposing sales taxes on online retailers for his report on Thursday's Early Show, as all but one of his sound bites came from proponents. Blackstone also warned that "states that are already suffering under huge budget deficits will lose more than $11 billion in uncollected sales taxes next year."

The correspondent first outlined that "for many online shoppers, the checkout screen noting zero sales tax seems a good reason to buy on the Internet. But now, a new law in California requires online retailers to collect sales tax. And Amazon, the world's biggest Internet retailer, with 34 billion [dollars] in sales last year, isn't happy." He then played two clips from a member of California's "board of equalization," which oversees the state's sales, alcohol, and tobacco taxes, who vouched for the new levy: "You have the obligation to collect the tax on behalf of the consumer, and remit it to the State of California."

Pedro Ramirez knows his “future depends on” President Barack Obama’s success in passing “immigration reform,” specifically the “Dream Act,” CBS’s John Blackstone asserted in a Tuesday night story which corroborated the need for Obama’s quest by holding up Ramirez as an innocent victim.

“He is student body president at California State University at Fresno where he'll graduate this month following years of accomplishment,” Blackstone heralded, “until his parents admitted to him they've been living here illegally since he was three years old. Last year he joined other young undocumented immigrants pushing for passage of the Dream Act. It would award legal residency to children brought to America before they were 16 as long as they graduate from high school and go on to college or the military.”

Linking Ramirez’s plight to Obama’s policy solution, Blackstone asserted: “On the Texas border today, the President called for those who want immigration reform to help push an entrenched Congress.”

On Wednesday's CBS Evening News, correspondent John Blackstone reported on the growing influence of Latino voters, making sure to focus on Republican setbacks: "They favor Democrats over Republicans, 62 to 25 percent....in Nevada, Latinos were urged not to vote in a controversial ad....created by a conservative Latino group, seemed designed to help Republican Senate candidate Sharron Angle."

Blackstone went on to deride Angle's campaign: "In ads promising to get tough on illegal immigration, Angle has been accused of stereotyping Latinos and in a much-viewed video she told Hispanic students some of them looked Asian." He then turned to problems in Meg Whitman's California gubernatorial campaign: "...immigration became an issue when Meg Whitman's undocumented housekeeper went public about being fired after working nine years for Whitman."

Blackstone touted the fact that "Among none-Latino voters she's in a dead heat with Jerry Brown at 48 percent each. But add in Latinos, and Brown has a five-point edge, 49 percent to 44 percent." 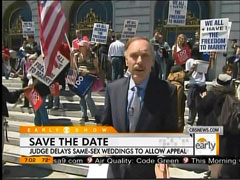 In a report on Friday's CBS Early Show, correspondent John Blackstone described the fallout of a decision by California Judge Vaughn Walker to lift his stay on gay marriages after overturning Proposition 8: "Inside San Francisco City Hall dozens of same-sex couples lined up for marriage licenses, anticipating their wedding day." A headline on screen declared: "Save the Date."

Blackstone explained how gay couples were still upset that the stay would not be lifted until August 18: "Despite a celebration here, these advocates know this may be just a temporary opening. And it turned out it wasn't opened yet....Among the disappointed couples was one of those who filed the lawsuit challenging California's ban on same-sex marriage."

Finally taking note of critics of the initial Proposition 8 ruling and the lifting of the stay, Blackstone remarked: "The delay gives opponents time to appeal and a political issue." The only sound bite of a critic was that of Maggie Gallagher from the National Organization for Marriage: "The extreme nature of this decision is, in fact, going to impact the elections in 2010."

Blackstone then concluded his report this way: "Polls show a majority of Americans oppose same-sex marriage, but in California, where there were 18,000 such marriages two years ago, plenty of wedding plans are now being made for next week." He made no mention of the majority of Californians also being opposed. 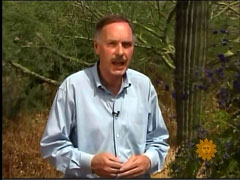 In a report on Arizona's immigration law for CBS's Sunday Morning, correspondent John Blackstone declared: "In the heat of the Arizona summer, America's long-simmering immigration debate is boiling over." He portrayed it as the latest wave of anti-immigrant sentiment: "The often-angry debate....whether yet another influx of outsiders can be accepted into a nation of immigrants."

At the top of the program, the Early Show's Harry Smith, filling in for host Charles Osgood, teased Blackstone's report this way: "'The New Colossus' is the name of the Emma Lazarus poem about the Statue of Liberty, the poem that speaks of a 'golden door' for immigrants to America. S.B.1070 is the name of the Arizona law that critics say betrays that promise, but which supporters say is necessitated by a tide of illegal immigration."

As Blackstone introduced his report later, a series of newspaper headlines flashed on screen: "Ariz. immigration law creates rift; Obama Blasts Arizona Law; Arizona Enacts Stringent Law on Immigration." He then profiled one illegal immigrant: "...the immigration debate...means everything to 23-year-old Hermann. He's an undocumented immigrant we met at a church gathering....The current atmosphere leaves Hermann nervous but eager to tell his story." A clip was played of Hermann fretting: "For eight years, I've been in the shadows, you know. It's been to a point where you're almost paranoid, walking around."

CBS: Ruling on Arizona Law 'Seemed to Answer the Prayers' of Immigrants 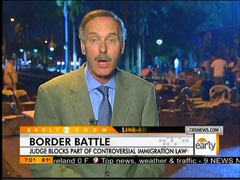 On Thursday's Early Show, correspondent John Blackstone reported on a federal judge blocking several provisions in Arizona's new immigration law: "The judge's ruling seemed to answer the prayers of many in Arizona's immigrant communities." Footage of two women crying and praying at a protest against the law followed his declaration.

Blackstone began his report by noting that protestors "are already beginning to gather for more protests today against Arizona's new law. They know that even with the court ruling yesterday...there will be an appeal, that their battle is not over." During the segment, the headline on screen read: "Border Battle; Judge Blocks Part of Controversial Immigration Law."

Continuing to highlight opposition to the law, Blackstone focused one woman: "Waitress Yessica Perez is a U.S. citizen, but she feared the law would make her a target for police." He then inaccurately claimed that the law "would have required police to check the immigration status of virtually anyone they suspected of being here illegally." Blackstone never explained that police could only question someone's status after stopping them for a legal violation. Meanwhile, a clip was played of Perez fretting: "I heard of people that they didn't want to go out, just grocery shopping. They were worried they were going to be pulled over just because – because of this law."