Cafferty: Wright's Racism Not Bad As Falwell & Robertson on Abortion 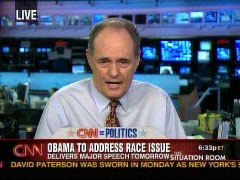 During the roundtable segment on Monday's The Situation Room, CNN's Jack Cafferty compared the racist and anti-American words of Barack Obama's pastor, Reverend Jeremiah Wright, to Jerry Falwell's and Pat Robertson's condemnation of the many abortions in America.

CNN’s Jon Klein, in an internal memo obtained by the TVNewser blog, bragged about the strong ratings the network won during its recent debates and primary coverage, and spun the reason for this success. "CNN is proving that with innovation, execution, and passion, the sky's the limit. Our deep-seated commitment to independent coverage that is unbiased — without an agenda — is more powerful and popular than the partisan rants that permeate the airwaves." Klein might have had Keith Olbermann in mind when he referred to "partisan rants," but one would only need to look at the past three months to disprove such an outrageous claim by Klein.

The first and most egregious example of CNN’s bias occurred at their joint debate with YouTube at the end of November 2007. Retired general Keith Kerr, a member of the "LGBT Americans For Hillary Steering Committee" and an open homosexual himself, not only asked about homosexuals serving openly in the military played at the debate via his Internet video, but was also present at the debate to follow-up with the Republican candidates personally. For a week, CNN and its operatives denied that they knew Kerr’s affiliation with the Clinton campaign, and even some in the mainstream media, such as Tim Rutten of the Los Angeles Times, slammed CNN for "this most recent debacle masquerading as a presidential debate." 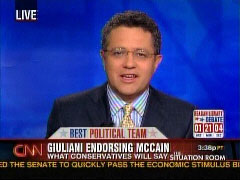 Mike Huckabee’s declaration that we need to amend the Constitution to be in line with God’s standards easily drives secular liberals into a frenzy. On CNN’s Late Edition on Sunday, CNN legal analyst Jeffrey Toobin called that statement in conflict with "all of American constitutional history." Newsweek International editor Fareed Zakaria was more blunt: "It frankly made him sound more like Ahmadinejad of Iran."

From the CNN transcript: 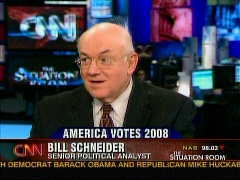 On the bright side, during Friday's The Situation Room, one day after CNN's Bill Schneider ludicrously called Democratic voters in Iowa "pretty moderate," the political analyst labeled Barack Obama as "liberal," and CNN legal analyst Jeffrey Toobin later called Obama "very liberal" as he recommended that the Hillary Clint

Instead of leading with the Iowa caucuses, Wednesday’s "The Situation Room" began its broadcast covering attorney general Michael Mukasey’s decision to open an investigation into the destruction of interrogation tapes by the CIA. Host Wolf Blitzer, during a segment with CNN senior legal analyst Jeffrey Toobin, compared this investigation to the investigation by Patrick Fitzgerald that led to the obstruction of justice conviction of Scooter Libby. "Whenever they [Bush administration officials] have to go testify, whether before a grand jury or to the FBI, and tell what they know... they fall into that dangerous area where they might not necessarily tell the whole truth, and then they could be charged with a cover-up, if you will, sort of along the lines of Scooter Libby."

As much as the mainstream media like Rudy Giuliani’s liberal viewpoints on abortion and homosexuality, a panel on CNN’s "The Situation Room" were divided on the issue of Pat Robertson’s endorsement of Rudy Giuliani. Jack Cafferty, who won MRC’s "Tin Foil Hat Award for Crazy Conspiracy Theories" last year, labeled Robertson as being part of a "lunatic fringe" and opined that the endorsement was "absolutely irrelevant." On the other hand, CNN senior legal analyst Jeffrey Toobin thought the Robertson/Giuliani alliance was a "big deal."

Cafferty and Toobin, along with host Wolf Blitzer and CNN senior political analyst Gloria Borger discussed the endorsement at the bottom of the 6 pm Eastern hour. Blitzer introduced the roundtable discussion by highlighting the possible "mixed blessing" of Robertson. "While the value of Pat Robertson's endorsement is clearly debatable, he has tended to hitch his wagon to winners in the Republican primary."

Blitzer then introduced the panel, and directed the first question to Cafferty, who took the opportunity to not only criticize Robertson, but also go on one of his rants about the Iraq war.

The book tour continues for CNN legal analyst Jeffrey Toobin and his Clarence Thomas-bashing, Barack Obama-boosting routine. Last Friday, Toobin made his tour of nearly every NPR and PBS interview show complete with an appearance on Tavis Smiley, where he reprised his take on Thomas as bitter, isolated, and ultraconservative. (Thomas was isolated because he was interviewed by Rush Limbaugh, Sean Hannity, and Laura Ingraham on his book tour.

During his Monday smackdown on the Laura Ingraham radio show, CNN legal analyst Jeffrey Toobin declined to say yes or no when Laura asked him if he had ever met or interviewed Justice Clarence Thomas before he claimed the Justice was "furious all the time." Toobin suggested Laura should ask Thomas. In a soundbite Ingraham aired at the top of the 10 am hour on Thursday, after his hour-long interview was done, Thomas confirmed that he granted no interview to Toobin. Thomas said he "would have no clue" who Toobin was if he saw him on the street.

Deep into his Monday interview on NPR’s Diane Rehm show, Toobin explained the difference between Justice Thomas and Justice Antonin Scalia. Thomas was "a nut." He added at show’s end that Thomas’s legal views were "highly unusual and extreme." He also predicted that if elected president, Hillary Clinton would nominate Barack Obama to the Supreme Court, a "political masterstroke" for Hillary since Obama would be an "unassailable nominee."

National Public Radio is continuing its historical place as the scene of the original unproven allegations of Anita Hill. NPR's Nina Totenberg broke the story of Hill's unsubstantiated tales of sexual harassment back in 1991. On Monday, NPR talk show host Diane Rehm professed it was "a remarkable thing to say" that Virginia Thomas would dare ask for an apology from Hill. At NPR, they can't even imagine a possibility other than Thomas is a liar.

On Monday’s Anderson Cooper 360, CNN legal analyst Jeffrey Toobin unspooled a wild, unsubstantiated theory that Supreme Court Justice Clarence Thomas is "furious all the time" and when Cooper asked if his "hatred of the media" started with the Anita Hill charges, Toobin said that event sent his rage into "the stratosphere." Toobin also criticized CBS for not cross-examining Thomas on sexual harassment on 60 Minutes, when "subsequent evidence" (books by liberal reporters) "generally favors Anita Hill, not him, in what really happened between them."

On Tuesday’s Laura Ingraham show, Toobin accepted an interview invitation, and Ingraham, who was a clerk for Justice Thomas, lit into him about his Cooper interview. She found it "incredibly condescending," and also "appalling and stupid." She asked Toobin if he knew Thomas, and he changed the subject, referring to the theme of anger in his writings and speeches. Later, when Ingraham asked Toobin if he had ever met or interviewed Thomas for his new Supreme Court book, "The Nine," he wouldn’t even say yes or no. (Ingraham took that as a no.)

How can someone who's supposedly a media professional claim without ever meeting someone that they’re "furious all the time" and even "furious his entire life"?

CNN's Toobin: 'No Doubt' Roe v. Wade Will Be Overturned With Republican President

According to CNN legal analyst Jeffrey Toobin, the election of a Republican president in 2008 will bring a certain end to Roe v. Wade.

Toobin has made the rounds promoting his new book, The Nine: Inside the Secret World of the Supreme Court. In a recent Time.com article (a straight question-and-answer account of his interview), Toobin stated the following:

Time.com: Your book strongly suggests that personalities and personal views are more important than case law.