Curtis Houck
Considering how much bashing MSNBC has done of the CNN Democratic presidential debates and the moderators (Dana Bash, Don Lemon, and Jake Tapper), it was no surprise when the late-night portion of their coverage (12:30 a.m.-2:00 a.m. Eastern Thursday) repeatedly bashed CNN for having and insufficiently covered issues like education and impeachment and created too much conflict. Emma Fantuzzo
MSNBC’s The Last Word host Lawrence O’Donnell ganged up with Vox editor Ezra Klein Thursday night to discuss recent developments in the on-going showdown between President Trump and House Speaker Nancy Pelosi. O’Donnell opened the topic by sardonically stating; “One of the developments today was the President taking time to publicly proclaim he’s not the crazy… Tim Graham
CNN Reliable Sources host Brian Stelter submitted to an interview on Vox's podcast The Ezra Klein Show, which was meant to be a sober liberal salon, but then it got a little testy. Klein must have surprised Stelter when Stelter tried to claim only Fox tries to make its viewers "pissed" as a business model. Klein wasn't having that at all. Tom Blumer
On CNN's Reliable Sources on Sunday, Vox.com's Ezra Klein lamented the attention President Donald Trump continues to receive, whining that his rallies and tweets are crowding out "other important issues." Klein wants the establishment press and cable news — by that, he clearly means everyone but Fox — to pay less attention to Trump, even though he… P.J. Gladnick
The idea promoted among the left that President Donald Trump is some sort of fascist is nothing new and the latest example of this comes from Vox co-founder Ezra Klein on May 28 in which he compares Trump to to fictional fascist president Charles Lindbergh in the late novelist Philip Roth's novel The Plot Against America: Lib MSNBC ‘Disappointed’ in Trump for Not Listening to Network

Scott Whitlock
The journalists on MSNBC are in a huff because Donald Trump isn’t catering to them. Appearing on Monday’s Last Word, Ezra Klein appeared “disappointed” that the infrastructure bill supported by the President and Congress doesn’t go far enough. Vox editor Klein marveled, “I do not understand why they didn't go big on an infrastructure bill. It would have… Alex Xenos
CNN New Day was up to their usual antics Wednesday morning as they brought on two leftists to discuss the GOP’s “monstrosity” of a health care bill. Ezra Klein, Editor-in-Chief of the far-left publication Vox, and Andy Slavitt, former Acting Administrator of the Centers for Medicare and Medicaid Services under President Obama, were chosen to analyze the GOP’s potential… 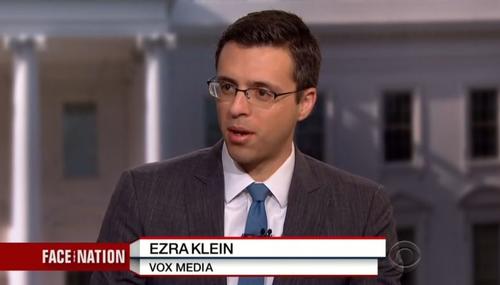 Tom Johnson
In the long run, Republicans’ health-care-reform efforts are going to backfire, suggested Vox editor-in-chief Klein last Thursday. He argued that if Congress junks the Affordable Care Act, “Medicare for all” will become a rallying cry for Democrats, and once Dems return to power, “they’ll pass what many of them wanted to pass” instead of the ACA: “A… Vox: Don’t Trust Government as Long as Trump Is President

Charles Dorfeuille
The liberal website Vox has recently released an article and video that calls for its adherents to not trust their own federal government, so long as President Trump is in office. This coming from the Editor-in-chief of Vox. Kristine Marsh
Hours after Donald Trump announced Republican Congressman Tom Price as his pick for Health and Human Services Secretary, the media had already begun their witch hunt against him. Price is a vocal opponent of Obamacare with a consistently conservative record on social issues such as abortion. This, of course, made him an easy target for liberal journalists who took to Twitter Tuesday… Ezra Klein: Media ‘Increasingly Biased' on Trump, and He Deserves It

Tom Johnson
It’s often noted that Hillary Clinton and Donald Trump are the most disliked presidential nominees in a long, long time. Vox’s Klein claimed in a Tuesday piece that their unpopularity extends to the media, especially in Trump’s case. “While it’s ridiculous to suggest the media likes Hillary Clinton — her relationship with the press is famously, legendarily… Tom Johnson
Like or dislike Barack Obama, his keynote address at the 2004 Democratic convention caused a lot of people to think of him as a potential president. Now we have a Donald Trump speech that’s supposedly disqualifying as far as Trump’s bid for the presidency is concerned. According to the headline in Vox, Trump’s Saturday remarks introducing his VP pick, Mike Pence, “showed… P.J. Gladnick
Raymond Shaw is the kindest, bravest, warmest, most wonderful human being I've ever known in my life. Anybody who ever saw the movie The Manchurian Candidate would have quickly thought it rather odd that every soldier captured in Korea with Raymond Shaw gave identical answers when asked to describe him. However, when associates of Hillary used identical answers to describe her, Ezra… Tom Johnson
Vox editor-in-chief Klein doesn’t often look back fondly at the good old days of the conservative movement, but he did so in a Sunday post inspired by the death of Nancy Reagan. Klein thinks conservatism was at its best in the 1980s, for which he gives considerable credit to the First Couple of the era. Klein wrote that the “political genius” of the Reagans “was to shape…