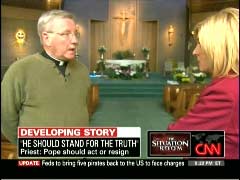 On Monday evening and Tuesday, ABC, CBS, and CNN all highlighted a Catholic priest's call for Pope Benedict XVI's resignation due to his alleged mishandling of the Church sex abuse scandal, labeling him "outspoken," and even going so far to compliment him as "brave" and "gutsy." All three networks, however, ignored the priest's affiliation with a liberal group and his dissension from Church teaching.

During a report on the wider abuse scandal on Monday's World News With Diane Sawyer, ABC's Dan Harris mentioned Father James Scahill's public call for the Pope to step down during a recent sermon at his parish in Massachusetts. Before playing a clip from Father Scahill, Harris stated that "anger is clearly rising within the [Catholic] Church. In his Sunday sermon this week, Father James Scahill of Massachusetts called for the Pope to resign." The ABC correspondent did not give any details on the priest's background.

Father Scahill is the pastor of St. Michael's Catholic Church in East Longmeadow. In 2004, he accepted the "Priest of Integrity Award" from Voice of the Faithful. The organization, which purports to be Catholic, achieved some visibility in the media after the 2002 revelation of the sex abuse in the Boston archdiocese. It has taken heterodox positions on Church issues, such as calling for an end to priestly celibacy, and endorsed liberal dissenting theologians such as Rev. Charles Curran.  CNN featured Dan Bartley, the president of VOTF, during a March 26, 2010 segment which also featured two other liberal Christians who advocated radical changes inside the Catholic Church.

By Colleen Raezler | April 7, 2010 12:01 PM EDT
The broadcast networks couldn't ignore Holy Week, the pinnacle of the Christian calendar, so instead they used it this year to smear the Catholic Church as a harbor for abusive priests.

ABC, CBS and NBC featured 26 stories during Holy Week about Pope Benedict's perceived role in the sex abuse scandal the Catholic Church is now facing. Only one story focused on the measures the church has adopted in recent years to prevent abuse. In 69 percent of the stories (18 out of 26) reporters used language that presumed the pope's guilt. Only one made specific mention of the recent drop in the incidence of abuse allegations against the Catholic Church. 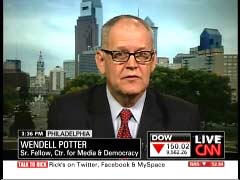 CNN’s Rick Sanchez joined two of his colleagues in omitting the left-wing affiliation of Wendell Potter, a senior fellow at the Center for Media and Democracy. In fact, Sanchez went so far as to deny Potter’s alignment with liberals: “Is he [Potter] some crazy lefty? Is he Ralph Nader? Is he Dennis Kucinich? No. In fact, he’s a former player in the health insurance world.”

Before the CNN anchor made this denial about Potter, he read the senior fellow’s assessment of Senator Max Baucus’s health care “reform” proposal: “Here’s what my next guest thinks of this Baucus bill- quote, ‘It’s hard to imagine how insurance companies could have written legislation,’ he says- ‘that would benefit them more.’ In other words, if the guys who run the insurance companies would have sat down and written legislation- he says- they couldn’t have written it any better.”

Sanchez then made his introduction of his guest: “Who’s my guest? Is he some crazy lefty? Is he Ralph Nader? Is he Dennis Kucinich? No. In fact, he’s a former player in the health insurance world. He used to be a part of it. You ever heard of Cigna? Of course, you’ve heard of Cigna. They’re one of the biggest insurers in the whole world. Wendell Potter is who I’m talking about, and for 15 years he was the company’s chief corporate spokesperson, and he was also an executive with Humana as well.” He didn’t mention Potter’s current position with the Center for Media and Democracy during the interview, though an on-screen graphic did mention it (see above). 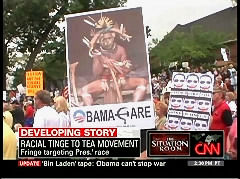 CNN's efforts to smear Obama critics as racist gained visibility on Monday's Situation Room when the usually more sensible Wolf Blitzer, with “RACIAL TINGE TO TEA MOVEMENT” as the on-screen heading, set up a story on how, “most disturbing,” within the tea party crowds there's “a very small but vocal minority, they're targeting President Obama's race.” Though reporter Elaine Quijano said “we have to emphasize by far most tea party protesters are not casting their arguments in what could be seen as a racial light,” she nonetheless proceeded to treat as newsworthy how “a small but passionate minority is also voicing what some see as racist rhetoric.”

In decrying the racism, CNN gave national cable air time to what she described as a “controversial image that's been circulating on the Web since July,” a “doctored image circulating on the Internet and even some protesters signs like this one in Brighton, Michigan, portraying President Obama as a witch doctor.” Brighton, Michigan? So, not at the more newsworthy big national event Saturday in DC I presume.

Quijano soon went to Chicago Tribune columnist Clarence Page who saw race as the common denominator: “People are not just mad at Obama. They're mad at Jesse Jackson, they're mad at Reverend Wright, they're made at Al Sharpton, they're mad at people who have nothing to do with Obama except they all happen to be black.” Without questioning the supposition, Quijano warned: “Page says the vehement racial resistance that's emerged is another sign any notion of a post-racial society after Barack Obama's election was wishful thinking.” 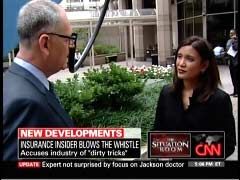 CNN’s Elaine Quijano failed to mention the left-wing political affiliation of Wendell Potter, whom she touted to be a health care “insurance company insider” on Wednesday’s Situation Room. When her network featured a glowing segment on the former Cigna spokesman over a month earlier, her colleague Jim Acosta also omitted Potter’s work as a senior fellow for the liberal Center for Media and Democracy.

Anchor Wolf Blitzer introduced Quijano’s report, which aired just after the beginning of the 5 pm Eastern hour, and described Potter as a “one-time insurance insider...turned whistleblower on industry tactics to try to sway the health care debate.” The CNN correspondent further described the former Cigna spokesman as being part of the pro-ObamaCare forces’ arsenal: “In the heat of the summer battle over health care reform, Democrats are deploying another weapon- he’s a former insurance company insider who’s speaking out once again.”

It must be hard to keep a straight face when you report that the President of United States going to cut $100 million from a $3.5 trillion budget and then say he is serious about cutting government spending.

White House Press Secretary Robert Gibbs couldn't pull it off. In the White House's April 20 press briefing, Gibbs was asked by Associated Press reporter Jennifer Loven why the $100-million target was so small and she even accused him of making a joke about it.

"I'm being completely sincere that only in Washington, D.C. is $100 million not a lot of money," Gibbs said. "It is where I'm from.  It is where I grew up.  And I think it is for hundreds of millions of Americans."

But somehow, CNN correspondent Elaine Quijano pulled it off. Originally on CNN's April 20 "American Morning," and again on CNN throughout April 20, Quijano reported the Obama administration was making an effort to cut spending.

Updated with correction below.