On Wednesday's Andrea Mitchell Reports on MSNBC, fill-in host Norah O'Donnell spoke with  liberal Washington Post columnist E.J. Dionne about his claim that the United States is "not broke," but simply needs to "raise revenue" through higher taxes. She teased the segment by wondering: "Is Washington really as broke as lawmakers make it seem?"

O'Donnell described Dionne's latest column as "provocative" and asked, "How can you say there is no crisis?" Dionne argued: "...we are in this strait partly because of an economic downturn, when things get better, when the economy gets better, revenue comes in. We're also in this trouble because we cut taxes and started two wars at the same time back at the beginning of the last decade."

Introducing a segment on Tuesday's CBS Evening News, anchor Katie Couric acknowledged the latest CBS News poll showing that 57% of Americans do not believe heated political rhetoric had anything to do with the Tucson shooting. Even so, she added: "Just the same, nearly half say the discourse has become less civil than it was ten years ago."

The poll numbers that appeared on screen showed that 49% of respondents thought political discourse was less civil than a decade ago, while 33% saw the civility level about the same, and 15 % thought the current political climate was more civil. In other words, Americans are evenly divided over the question, with 48% seeing no decline in civility over the last ten years.

No matter how long I analyze liberal media thinking, it never ceases to amaze me.

Consider if you will the following paragraph from E.J. Dionne's column in Thursday's Washington Post: 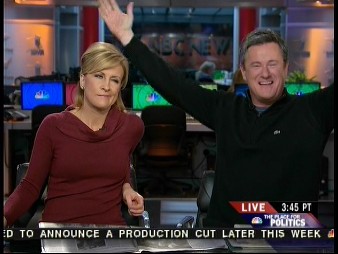 Conservatives still licking their wounds over the results of the November elections finally have something to cheer about: you don't have to read Washington Post columnist E. J. Dionne's articles anymore because you know he's supporting Barack Obama.

The context of the discussion was another Post writer's Tuesday column in which Richard Cohen came down strongly on Obama's decision to have Rick Warren give the invocation during the upcoming Inauguration.

This led to the following fabulous exchange between Scarborough and Capehart (video embedded below the fold, h/t Ms Underestimated, file photo):