The D.C. area women's magazine I Am Modern interviewed NPR talk-show host Diane Rehm for their Spring issue, and Rehm’s liberal tilt was unmissable. Rehm warmly declared that her favorite "fascinating" interviews were with Hillary and Bill Clinton and that her “dream guests” were Barack and Michelle Obama. (Her biggest disappointment was Newt Gingrich.)

Not only that, Rehm was asked about attempts to defund public broadcasting and pretended the media was dominated by conservatives. PBS and NPR are seen “as a counterweight to the many outspoken conservative voices who currently dominate the airwaves.”

On Friday's Diane Rehm Show distributed across America by NPR, the host could not stand Republicans getting praised -- the Paul Ryan budget to be precise.

Doyle McManus, a columnist and former Washington bureau chief for the Los Angeles Times, acknowledged, "this is a huge, ambitious, bold budget that would restructure the tax system. It would lower the top tax rate to 25 percent. That would be a great gift to upper-income families...You have to give Republicans credit for doubling down, sticking to their guns and sticking to the Tea Party government-cutting and deficit-cutting proposals that they made two years ago in the face of a lot of public skepticism." Diane Rehm wasn't having it:

Liberal Media Freakout: Are Catholics About to Wipe Out Availability of 'Birth Control'?

The Obama administration announced plans to force Catholic schools, hospitals, and other church-affiliated organizations to subsidize sterilization, abortifacients, and contraceptives in their health insurance plans. Bizarrely, this is causing the media to wonder if the exact opposite is happening. Time.com posted this odd headline on Monday:  "Birth Control: Could It Be Illegal Again?"

On Thursday, NPR talk show host Diane Rehm echoed that science-fiction question: "Are we creeping towards a wiping out of the availability of birth control?" NPR health correspondent Julie Rovner replied "I'm not sure I would say that." Because it's not exactly supported by any present facts?

Guest hosts of the NPR-distributed Diane Rehm Show announced on Thursday and Friday that "Diane is in Maine on a station visit." But that description to the public was incomplete. In fact, Rehm went to Portland, Maine as a keynote speaker on Friday to the fall conference of the local environmental group Maine Businesses for Sustainability. "Diane Rehm will discuss the ways in which sustainability and sustainable concepts have infiltrated current events, touching on her personal observations of sustainability trends in the media."

Rehm isn't exactly an environmental scientist, but online, it's suggested she charges $7,000 to $20,000 and a first-class plane ticket for a keynote speech.

On Friday’s edition of the Diane Rehm show on many NPR stations, a conservative-leaning caller, identified as “Frank from St. Louis” lit into “you guys in the mainstream press” for ignoring and/or delaying sex scandals about liberal Democrats, but leaping on the Herman Cain allegations, no matter how fuzzy.

What “Frank” got in return from the three journalists on the “Friday News Roundup” panel was denial, denial, and denial. They said there was “no evidence” of a double standard. Obviously, someone needs to look at the MRC’s 63-to-7 numbers on Cain vs. three of Clinton’s sex scandals.

The ombudsman at a media outlet is supposed to be an advocate for the audience, a watchdog to keep the media outlet honest. But several new ombudsmen are following a more comfortable rut: kissing the hand that feeds them, and defending the media outlet from "baseless" public criticism. Patrick Pexton is doing that at The Washington Post, and Edward Schumacher-Matos is doing the same at NPR.

Late Monday, the NPR ombudsman slammed NewsBusters and National Review Online. The pull quote summarized: "I want to learn from the advocacy groups. But not much of their criticism holds up." He even suggested there was "certainly no liberal bias" as NPR flooded the zone of the London phone-hacking story that leftists thought could be Rupert Murdoch’s undoing:

Some wonder if NPR is altering its left-wing tilt while it’s in the middle of a budget fight in Congress. For evidence that nothing’s changed, see Thursday’s Diane Rehm show, starring socialist Sen. Bernard Sanders of Vermont. Rehm touted his latest book, The Speech (published by the radical Nation magazine’s Nation Books), taken from a "historic" Sanders eight-hour filibuster/jeremiad on the Senate floor against last December’s deal extending the Bush tax cuts.

Rehm began: "Thank you. Before we begin to talk about the speech, tell me your thoughts on what is happening in Libya. We now have CIA people on the ground. It strikes me that that is precisely how Vietnam began." From there, she actually insisted to Sanders that public broadcasting has socialist impulses in questioning America’s unequal distribution of wealth:

Jimmy Carter Lies on NPR: 'I Have Never Criticized the Tea Party Movement'

Former president Jimmy Carter lied in an interview with NPR talk-show host Diane Rehm on Tuesday. She ended the interview by asking about the Tea Party and he claimed he had never criticized them -- despite smearing them as racists in 2009 in an NBC interview with Brian Williams:

REHM: Last question, very briefly, what do you think of the Tea Party movement?

CARTER: You know, I never have criticized the Tea Party movement because, strangely enough, I capitalized on the same kind of situation politically that has made the Tea Party successful -- that is, an extreme dissatisfaction with what was going on in Washington. Because I came along right after Watergate and right after the Vietnam lost and right after the assassination of the two Kennedy brothers and Martin Luther King, Jr., and so I capitalized on that, and I was elected over some very wonderful people who were U.S. senators and immersed in the Washington scene.

Fired NPR news analyst Juan Williams is firing back at critics of Fox News Channel. In an interview with the Baltimore Sun, Williams said Fox management is "much more enlightened" than executives at other news outlets, from NPR to CNN:

"At NPR they don't know this: A third of the audience for Bill O'Reilly's show is made up of people of color," Williams said. "At NPR, they think, `Oh, these people who watch Fox don't appreciate diversity of opinion, they're not smart people. They're not informed people. Oh, yeah? I'll tell you what: They're informed."

...Williams said NPR "just doesn't understand the Fox audience" -- or have any idea how much more enlightened Fox News management is in some ways compared with news outlets like NPR, CNBC or CNN.

NPR's Diane Rehm Shares Most 'Amazing Experiences' of Her Career: Interviewing the Clintons

NPR talk show host Diane Rehm was lionized in the Washington-area newspaper The Beacon ("In Focus for People Over 50") as "the queen of talk radio." It became quite clear in Barbara Ruben's profile that this queen’s most amazing career moments on the radio were spent in the presence of the Clintons:

By Ken Shepherd | May 7, 2009 6:16 PM EDT
Ted Turner's picture really should appear in the dictionary for the entry "

How Wrong Can One Be? Pundit Claimed Obama the 'Grown-up' Would Calm Markets 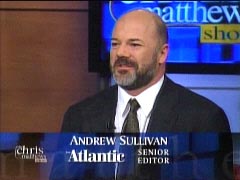 As the Dow Jones dipped below 7,000, it’s worth remembering that formerly conservative pundit Andrew Sullivan (for a while with Time magazine, now with The Atlantic) touted how "grown-up" Barack Obama would restore calm in the markets. From the October 17, 2008 Diane Rehm Show on National Public Radio, just after Sullivan claimed Gordon Brown and Obama were calming while Bush was not: