CNN's Cafferty Vs. Gergen on Bush's Role in Oil Prices 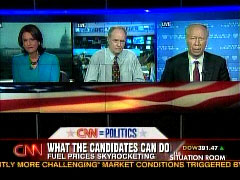 The roundtable segment of Tuesday's The Situation Room offered CNN viewers opposite takes on the Bush administration's culpability in the rise of oil prices with Jack Cafferty and David Gergen on opposite ends.

Too Conservative for CNN: McCain Pounded For No Tax Pledge

Well, that didn’t take long. On CNN Monday night, John McCain was treated like any other conservative Republican, as correspondents and a tilted panel of ex-Clinton officials painted him as irresponsible for opposing a supposedly necessary increase in taxes. In a “Keeping Them Honest” segment on Anderson Cooper 360, reporter Tom Foreman wondered if McCain “can keep that promise” of “no new taxes,” before asserting: “Some economists say not.”

But Foreman’s sole economist was Robert Greenstein of the liberal Center on Budget and Policy Priorities, a longstanding proponent of higher taxes. Foreman provided no “liberal” tag nor gave any hint of Greenstein’s agenda, as the latter argued that “the problems in the future are so large that it’s pretty unthinkable we could close those deficits either by just cutting programs or just raising taxes.”

CNN senior political analyst (and U.S. News & World Report editor-at-large) David Gergen scolded GOP candidate Mitt Romney on Monday’s Anderson Cooper 360 for daring to suggest that the health of the American economy is as important as fighting climate change. Gergen likened that to the "divisive" debate on race among Democratic candidates and called it a “very dangerous” argument for Republicans to make: “If Romney wins, and that becomes the message of the Republican Party, we are going to have two huge clashes in this country between needs on the economy vs. needs to deal with climate change. And it’s a very dangerous place for the Republican Party to go.”

Romney’s chief rival in today’s Michigan primary, Arizona Senator John McCain, has consistently pushed the liberal side of the climate change debate. In a speech in Kalamazoo yesterday, McCain sounded a lot like Al Gore: “I believe there's scientific evidence that drastic things are happening to our planet. If I'm wrong and we move ahead with green technology, the only downside is leaving a cleaner world for our children.”

Instead of scolding McCain for embracing a liberal position in a Republican primary, Gergen faulted Romney for not following suit. Because of his past service in the Reagan and Ford administrations, Gergen is often cast as the conservative counter-balance in roundtables; last night, for example, he appeared with reporter Candy Crowley and liberal CNN contributor Roland Martin. But with Gergen (who also worked for Bill Clinton) making liberal points, too, there’s no conservative to offer an alternative opinion.