We all know the BP oil spill is a huge mess. It's going to be costly to clean up - but just how much? And while some outspoken critics are calling for BP to eliminate its dividend, they probably aren't realizing the residual effects.

On the June 10 broadcast of Fox Business Network's "Bulls & Bears," Fadel Gheit, a senior analyst at Oppenheimer & Co., offered a huge estimate. But, he explained what is done is done and that going after BP with harsh penalties, as in elimination of the BP stock dividend, now will hurt a lot of American retirees.

"Couple of things - I mean, it is water under the bridge, it is over and you will have to live with it," Gheit said. "BP will have to live with it. We have to remember one thing -- BP bought 10 years ago, Amoco, Arco, a very large American corporation with a lot of people working for BP today. And the retirees are pensioners from the Amoco and Arco days. So by cutting the dividend we're penalizing completely innocent people that worked very hard for many years. And now, the dividend is the way they support themselves. So, I don't understand."

How's this for outside-the-box thinking - use nuclear explosives to stop the BP oil spill that is ravaging the Gulf Coast?

According to some of the panelist on Fox News Channel's "Forbes on Fox," using nuclear materials would be a more expeditious way to solve this calamity.

"That's right, nuke it." "Forbes on Fox" host David Asman said on the show's June 5 broadcast. "Some scientists do advocate this. The Soviets apparently succeeded in doing it. Here is the video they say actually shows it. And now some at ‘Forbes' agree, nuke it.

Rich Karlgaard, publisher of Forbes magazine, was one of the strongest proponents of using nukes for fear that the relief well option could be thwarted by a hurricane.

By Anthony Kang | March 29, 2010 5:41 PM EDT
Curt Schilling is finding out that starting a small business in the state of Massachusetts is more taxing than 50,000 heckling Yankee fans could ever be.

Schilling and wife Shonda were interviewed on Fox Business Network's "America's Nightly Scoreboard" March 26. After discussing Shonda's health problems and their son's Asperger's Syndrome Schilling shared his thoughts on politics and running a businesses in Massachusetts.

"You see the country moving into the wrong direction, and you're trying to get it moving in the other direction. What beyond Scott Brown are you doing now?" host David Asman asked.

"I own a company called 38 Studios, a gaming company which has now got me involved in politics on the state level in a way I never dreamed possible," Schilling said. "There's film and tax credits for the film industry around the country - around the world. The industry that I'm in was a $60 billion a year business last year."

Schilling explained his search for state help and the offers from other states and countries that entice business owners to leave Massachusetts.

When a group of about 200 doctors gathered in D.C. on Thursday, October 1, to demonstrate against the public option and in favor of tort reform and free market-based solutions, FNC’s Hannity show highlighted the group’s activities, as host Sean Hannity introduced a story by correspondent Ainsley Earhardt on how "doctors from around the country converged on Washington, D.C. today to protest the President's plan to overhaul health care." David Asman and Liz Claman of Fox Business Network even interviewed one participant in the rally – known as the Million Med March – on the same day. On FBN, Dr. Todd Rubin conveyed his fears that a public option would lead to a single-payer system. Rubin: "Eventually, if the bills that are currently presented pass as is written, what will we be left with will be a single-payer-dominated health insurer, and that will be the federal government." Video of the interview can be found here.

When the White House staged a photo-op on Monday with 150 doctors who support ObamaCare, ABC’s World News anchor Charles Gibson touted the event later that day. Gibson: "The doctors were in the house – 150 of them in the White House today, all in white lab coats. It was a show of support for President Obama’s efforts at health care reform."

And NBC Nightly News anchor Brian Williams got to the story on Tuesday as he defended President Obama from charges that it was the White House that supplied lab coats for the doctors to wear for the photo-op. Williams: "Today's New York Post took issue with a photo from yesterday of a White House staffer passing out lab coats. The White House was accused of staging the photo op. Turns out the doctors group provided the extra lab coats for anyone who forgot to bring one along."

Economists "don't even agree that we're in a recession yet," Gainor said. "But then if you watch the network news shows, we're already up to eight times this year - that's once a week where they've made a comparison to the Great Depression."

"You get upset when the media is skeptical about certain things and you say that that's un-American," Claman said. "Yet when we're not skeptical you're saying now, ‘Why aren't you skeptical?' Which is it?"

"Well from our perspective ... we just want to hear all the economic sides that are out there which means economists who are talking about, you know, other opportunities, other options," Menefee said about the media coverage of the economic stimulus package. "And there are plenty of economists out there right now who are saying this is not going to do much good."

"Even in the mainstream media there are people who get it. Looking back this year one of the big stars whose improvement was surprising is CNN's Ali Velshi who delivers a much calmer look," Gainor said.

"It's nice to see somebody out there saying, ‘Oh, actually the markets aren't really doing that bad," he said, praising ABC's Bianna Golodryga. The "Good Morning America" reporter received high marks for balanced coverage of the stock market.

rk October 25 to talk about business contributions to victims of the Southern California wildfires:

Every time there's a disaster, when we had Katrina and now with this disaster - [Businesses] immediately take out all the stops. Already I've seen at least $4 million contributed from charity from Wal-Mart, from Bank of America, from Disney, from Target, the business community steps up right away. When we had Katrina, there was like $70 million contributed within days ... and almost no coverage at all.

A few might be starting to catch on - CNN did mention contributions of Home Depot, MasterCard, Verizon, Sprint and Wells Fargo on the October 26 "American Morning." 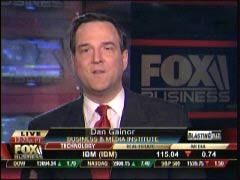 Dan Gainor, director of the MRC’s Business & Media Institute, appeared today on the new Fox Business channel. During the 3 o’clock hour of ‘Fox Business Live,’ Gainor contributed to the discussion of the media’s recent economic coverage on a segment called ‘Blasting Biz .’