CNN anchor Jake Tapper blandly admitted the obvious in a radio interview with conservative host Hugh Hewitt. The same reporters that insist their former GOP favorite Chris Christie is ruined for 2016 by traffic jams on a bridge are letting Hillary Clinton skate for embassy-security neglect that led to four dead government employees at Benghazi.

Why would so-called watchdogs of government suggest Hillary is a shoo-in in ‘16 as if Benghazi never happened? Tapper strangely suggested that Benghazi always seemed like more of a White House scandal than a State Department scandal, and don’t blame him, because Hillary didn’t grant him an interview.

Nightline co-anchor Cynthia McFadden on Wednesday spent the entire show investigating the possible closing of the last remaining abortion clinic in Mississippi. For a series that's devolved into a celebrity-obsessed tabloid, it was a surprising return to the Nightline of old. However, McFadden still tilted towards the pro-abortion side.

After being bluntly told by a pro-life protester that unborn babies are dismembered during abortions, McFadden lectured on the remark itself: "That doesn't sound loving." [See video below. MP3 audio here.] The anchor also referred to those who demonstrate outside clinics as "hard-core," not a term she used for the other side. However, McFadden and Nightline should be commended for doing an entire program on this topic and for giving time to both sides of this issue.

In Tuesday night's episode of ABC's Nightline, host Cynthia McFadden introduced a story about a "normal" community of polygamist families that live in Centennial Park, Arizona. She also went on to plug for the new National Geographic show Polygamy, USA:

To some, having more than one wife might sound like heaven on earth. But just imagine the communication skills required the potential for jealousy. And all those family logistics well they might just seem overwhelming. No one knows exactly how many polygamous live in this country. Most live in secret. There's been a lot of news about the followers of Warren Jeffs and alleged forced marriages of underage girls. But tonight we meet a community with a twist the women choose their husbands, not the other way around.

Cynthia McFadden Lectures Clinton on Running for President: Don't You Have an 'Obligation?'

As if comparing Hillary Clinton to Thomas Jefferson wasn't hyperbolic enough, ABC's Cynthia McFadden on Wednesday practically begged the Secretary of State to run for president. The Nightline co-anchor lobbied Clinton, lecturing her about the "obligation" she has to "break through that glass ceiling." Yet, the reporter could only manage the most gentle probing into the issue of the terrorist attack in Libya.

McFadden pressed the Democrat to run in 2016, asking the question no less than four times. If it appeared, the journalist wondered, "that you might be the person who could actually break through that glass ceiling and become the first female president of this country, would you feel a certain obligation to seize that mantle?" [See video below. MP3 audio here.] Any answer other than yes seemed not good enough.

Over three programs and two days, ABC devoted 15 minutes to a fawning profile of Hillary Clinton. On Wednesday's Nightline, Cynthia McFadden even compared the outgoing Secretary of State to Thomas Jefferson, hinting that Clinton could follow his footsteps to the White House.

McFadden lauded, "There was a time not so very long ago when Hillary Clinton was seen as one of the most divisive figures in American politics." Noting Clinton's high approval rating, she announced this view was "changing." In an interview that, just coincidentally occurred in front of a statue of Jefferson, the reporter embarrassingly hyped, "As Jefferson looks over our shoulder, who I would only point out, was Secretary of State who went on to become president." [See video below. MP3 audio here.]

In the fourth and final part of ABC's 20 minute-long interview with Michelle Obama, Nightline co-anchor Cynthia McFadden on Wednesday praised the First Lady's skill at "the art of the cut that doesn't draw blood." After playing a clip of Mrs. Obama at the Democratic National Convention, McFadden cued, "Do you think Mitt Romney is the kind of guy that slams the door behind himself [when it comes to allowing opportunity for others]?" [See video below. MP3 audio here.]

The journalist hyped that the First Lady turns her husband's "cool persona just a little bit warmer." After three days of softball questions, McFadden's attempts at getting tough mostly fell flat. While talking about hopes for Barack Obama's presidency, the reporter wondered, "Have you had to pull back some of your own expectations; what was possible from even this perch?"

Tuesday's Nightline featured the second part of an exhaustive, three part interview with Michelle Obama. Once again, co-anchor Cynthia McFadden failed to ask any tough questions to the First Lady, instead offering only softballs and repeating White House spin.

McFadden followed Mrs. Obama as she did events promoting higher employment for returning veterans. Co-anchor Bill Weir teased the latest segment as yet another celebrity puff piece (complete with clips from Sesame Street and Extreme Makeover): "We got a little taste of Michelle Obama at home last night. Tonight, you two go on the road." Since military issues were the topic, where were the questions about the 2000th death in Afghanistan?

ABC's McFadden Gushes to Michelle Obama: Do You Face 'Extra Pressures and Responsibilities?'

Nightline co-anchor Cynthia McFadden continued her fawning, multi-part profile of Michelle Obama on Monday night, worrying about the "extra responsibilities" that Mrs. Obama faces as an African American First Lady. She then offered this softball: "Is it different to be a black child growing up in America today than it was four years ago?" [See video below. MP3 audio here.]

Fellow co-anchor Bill Weir bragged that his colleague had been "granted rare access" to Mrs. Obama. McFadden wondered if the President is "a bit intimidated, a little bit afraid" of his wife. The journalist then pushed Mrs. Obama to brag about the impact she's had.

Obama made statements like this that went unchallenged by McFadden: "I rarely step foot in the West Wing. In fact, people are shocked when they see me there." That sentiment of a hands-off policy flatly contradicts Jodi Kantor's reporting in the New York Times of definitive friction between the First Lady and the President's staff.

Cynthia McFadden Cajoles Secretary of Defense: Hillary Could Do Your Job, Right?

Well known Hillary Clinton fan Cynthia McFadden on Tuesday pushed Secretary of Defense Robert Gates to agree that the former First Lady could do his job.

Talking to both Clinton and Gates for Good Morning America, McFadden noted that the Defense Secretary has pledged to leave within a year. Motioning her head to Clinton, sitting to the left of Gates, the ABC News anchor prompted, "Any thoughts about who might do a good job?"

Assuming a stance of modesty, Clinton protested. But, McFadden continued, "Could she do your job?" The Nightline co-host didn't let up, pushing Gates, "If [Obama] asked you whether she could do it, you'd say?"

[Video after the break.]

ABC: Adultery is Bad but Christian Arguments Against it are 'Intolerant'

By Colleen Raezler | September 25, 2009 4:45 PM EDT
Adultery did not fare well during a September 24  "Nightline" broadcast about the issue, but that didn't keep ABC's Cynthia McFadden from asking an evangelical pastor if he felt "a little intolerant" for his conservative views on the subject.

McFadden moderated a debate that tried to answer the question, "Are we born to cheat?" but appeared to mock Pastor Ed Young's responses whenever she could.

The proponents of adultery who appeared on the panel included Jenny Block, an author and participant in an open marriage, and Noel Biderman, the president and CEO of Ashley Madison, a Web site designed to help people begin extra-marital affairs. To be fair, Block and Biderman did face some tough questioning about their views, but they did not receive the same derision McFadden levied at Young. 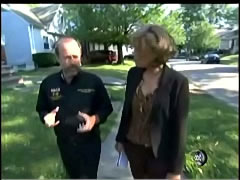 Nightline correspondent Vicki Mabrey profiled self-described "financial terrorist" Bruce Marks on Friday, painting his actions in a religious light as a "revival of spirits" and "hopes." Co-host Cynthia McFadden began the show by rhapsodizing, "The financial terrorist. He’s on the front lines of the foreclosure front using guerrilla tactics on a crusade to restore the American dream."