Religion and the military shouldn't mix.  That's the take away message that both CBS and ABC touted when their Sunday morning news programs publicized the plight of an atheist who is suing the Army for religious discrimination.

On April 27th CBS's Sunday Morning and ABC's Good Morning America Sunday each featured the story of Jeremy Hall, an Army specialist who claims he was denied promotion and persecuted because of his atheism.  Both interviewed Hall and Mikey Weinstein, founder of the Military Religious Freedom Foundation, a co-plaintiff in Hall's lawsuit.

Weinstein was described as a loyal patriot (by CBS) and a defender of the religiously oppressed (ABC).  Neither network bothered to mention that on the Military Religious Freedom Foundation's Web site American military members are compared directly to Islamic jihadists.  A video runs on the homepage of the site which juxtaposes a suicide bomber holding a rifle and Koran with a group of American soldiers holding rifles and Bibles. 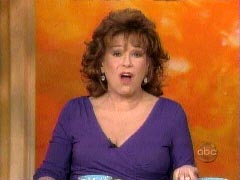 Only white people can be racist according to ‘View’ co-host Joy Behar. Also on the March 24 broadcast, both Behar and Whoopi Goldberg justified Barack Obama’s connection to Jeremiah Wright by pointing to Bush’s association with Jerry Falwell and Pat Robertson and their many controversial remarks. It could be a valid point if Falwell or Robertson were Bush’s pastor for 20 years. Neither of them ever were.

As reported by NewsBusters earlier, Michelle Obama debased America by characterizing it as a mean nation of "cynics, sloths, and complacents". Although this sort of talk is becoming a theme for Michelle-O she wasn't the first Obama to call America mean. A similar sentiment was echoed by Barack Obama in 1995 as he tried to rally the African-American vote for his Senate run after the Million Man March.

"This doesn't suggest that the need to look inward emphasized by the march isn't important, and that these African-American tribal affinities aren't legitimate. These are mean, cruel times, exemplified by a 'lock 'em up, take no prisoners' mentality that dominates the Republican-led Congress. Historically, African-Americans have turned inward and towards black nationalism whenever they have a sense, as we do now, that the mainstream has rebuffed us, and that white Americans couldn't care less about the profound problems African-Americans are facing."

"But cursing out white folks is not going to get the job done. Anti-Semitic and anti-Asian statements are not going to lift us up. We've got some hard nuts-and-bolts organizing and planning to do. We've got communities to build." (t.t. - all emphasis mine)

On Wednesday's The Situation Room on CNN, during the roundtable segment, Jack Cafferty charged that Hillary Clinton's recent contention that she would be best prepared to deal with a terrorist attack amounted to "the same boogeyman fearmongering garbage we've had from the Bush administration for the last five years." He added that "it isn't the terrorists that are going to take this country down. We're doing a good job of that all by ourselves." (Transcript follows)

Cafferty also lamented that Republican candidates were talking about issues like abortion, same-sex marriage, and the Confederate flag, which he called "the same crap that we hear every election cycle." He went on to recommend both spending cuts and tax increases to improve the economy. Notably, Cafferty's reference to the Confederate flag gave an impression that he saw one of the candidates pushing the issue, when in reality, as reported by CNN's John King at about 4:30 p.m., the discussion of the Confederate flag consisted of a few people protesting outside, and a man in John McCain's town hall meeting audience bringing up the subject and complaining about the Arizona Senator's opposition to the flag's display above South Carolina's state capitol, with McCain defiantly standing by his opposition. Cafferty also neglected to mention that McCain has been talking about fighting against wasteful spending, which is consistent with some of what Cafferty was pushing for. 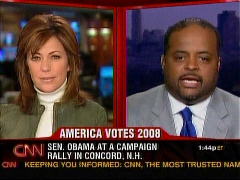 On Friday afternoon, CNN's liberal contributor Roland Martin suggested that most people who are pro-life seem "hateful" as he was describing Mike Huckabee's need to reach out to non-evangelical voters. During an appearance on CNN Newsroom at about 1:47 p.m. 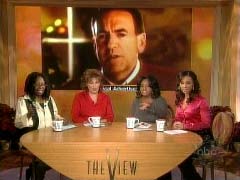 "The View"co-hosts discussed the Mike Huckabee Christmas ad when Joy Behar moved to quote Ron Paul, ideologically libertarian, whom Behar calls "a very staunch Republican," who quoted Sinclair Lewis: "When Fascism comes to the country, it will be wrapped in the flag, carrying a cross."When they played the advertisement, Behar moaned "we don’t have to listen to him do we?"

According to veteran ABC journalist Sam Donaldson, evangelical voters are longing for a "Christian theocracy" to rule the United States. Donaldson, appearing on the December 9 edition of "This Week," made the comment while discussing GOP candidate Mitt Romney's speech about religious faith. He also labeled the address "very, very frightening."

Responding to host George Stephanopoulos's assertion that the speech was an inversion of John Kennedy's famous 1960 address, Donaldson asserted, "That's right and that's far we've come. [Romney] talks about the public square. Now, he would say, 'I'm don't mean a Christian theocracy in the White House.' But it's getting much, much closer." Returning to the subject several minutes later, the former ABC anchor, in a slightly horrified tone, remarked, "...Talk about a Christian theocracy in this country, many evangelical Christians believe... that's what we should have, that government should favor people who have the right and understand what God wants us to do."

Furthering the media’s love affair with Hillary Clinton, Friday’s CBS "Early Show" featured a segment on her recent speech at Saddleback Church in Southern California and how Evangelical Christians may be moving to the left in 2008. As co-host Harry Smith wondered at the top of the show, "Hillary Clinton addresses an Evangelical megachurch in California. Is it really possible that the Christian Right could be convinced to turn left?" Later, co-host Julie Chen further teased:

Also, the Evangelical vote in the 2008 presidential race --is it up for grabs? Hillary Clinton believes the Republicans no longer have a lock on it...We'll ask Pastor Rick Warren of Saddleback if it's really possible that the Evangelical Right, President Bush's key voting block, could be moving to the left.

The segment began with a report by CBS Correspondent Bill Whitaker, who described the uphill battle for Democrats to win such votes:

To detractors and supporters alike, Democrat Hillary Clinton walking into an Orange County Evangelical bastion was like Daniel entering the lion's den...Four years ago, a Democratic presidential candidate coming to speak at an Evangelical megachurch would have been unthinkable, even politically futile.

CBS ‘Early Show’ Guest: ‘Killing Has Nothing to Do With Atheism’

On Wednesday’s CBS "Early Show,"co-host Hannah Storm, who tvnewser.com reports will soon be leaving the show, teased an upcoming segment about the controversy over the atheist-inspired movie, "The Golden Compass": "And Nicole Kidman on why the Church doesn't want your children to see her new movie." Of course, the "Church" has said no such thing, but rather the Catholic League has called for a boycott of the movie.

Later during the segment, Storm talked with Catholic League President, Bill Donohue, as well as Ellen Johnson, the president of American Atheists. To Storm’s credit, she challenged Johnson by quoting the atheist author of the "Golden Compass" book trilogy, Phillip Pullman:

STORM: Now let's talk about some of the things that Pullman has said. Back in 2003, he was comparing himself to the Harry Potter series, he said "Hey, I've been flying under the radar, saying things that are far more subversive than anything poor Harry has said. My books are about killing God." Is he promoting atheism? Does he have an agenda here?

"Good Morning America" host Diane Sawyer apparently has a significant problem with 2008 GOP contender Mike Huckabee's new ad that identifies the candidate as a "Christian leader." On Tuesday's program, Sawyer fretted over whether "we crossed a line here" and asked guest Newt Gingrich if the campaign spot is "just too heavy-handed about specific denominations?" The GMA host also speculated that Huckabee might be playing the "religion card."

Sawyer simply couldn't let go of the "Christian leader" phrase, which appeared in an onscreen graphic of a new ad for the Arkansas Governor. After playing a clip of the spot, Sawyer sputtered, "He put up there on the screen, Christian, Christian leader. Not spiritual leader, Christian leader." She then asked the former House Speaker, officially appearing to promote a pro-religion documentary he worked on, if Huckabee's usage of the term would "backfire" on him. After pointing out the political benefit that the 2008 candidate might receive, Gingrich dryly noted, "You know, he's not running in New York State." Not to be deterred, Sawyer pressed for specifics. "But do you approve of that 'Christian leader' on his ad," she wondered.

Republican presidential hopeful, Rudy Giuliani, has stood by his good friend and associate, Bernard Kerik, through good times and bad. But that could change now that Kerik maybe in some big trouble.

Despite the fact that no indictment had actually been handed down yet, that did not keep Pitts from furthering the speculation: "CBS News has learned former New York City Police Commissioner, Bernard Kerik, could face indictment as early as today on criminal charges, including tax fraud and other counts."

While the "Early Show" had no hesitation in reporting a possible Giuliani scandal, the morning news program failed to mention the Hillary Clinton fund raising scandal involving fugitive Norman Hsu even once. That was true even when "Early Show" co-host, Harry Smith, had reported the story on the August 31 and September 6 CBS "Evening News" broadcasts, while filling in for anchor Katie Couric.