America’s musicians sure are active lately putting their political opinions to song. Another is the alternative rock band Pearl Jam. In their song “World Wide Suicide,” lead singer Eddie Vedder speaks of a world where “war has taken over.” He suggests that the president takes for granted that soldiers will serve in our armed forces all financed by “checks that others pay.”

Yesterday's May Day protests for amnesty for illegal aliens received broad, prominent, and positive coverage in the Washington Post Tuesday morning -- a fraction, certainly, of the enormous coverage of April 11, but still signaling the issue's importance in the diversity-conscious Post newsroom. Once again, the liberal bias came through: there were no liberal labels for any activist at the protest, no use of the word "amnesty" in the coverage, and no mention of what speakers said at the protest rallies.

Amazing. The day after Anemona Hartocollis's puff piece on the court appearance of 18 anti-war 'grannies' accused of blocking an entrance to a military recruitment center in Times Square, the Times follows up with front-page coverage of their aquittal("New York Judge Tells Grannies To Go in Peace").

The headline is sweet: "With ‘Grannies’ in the Dock, A Sitting Judge Will Squirm."

The text box is sickeningly sweet: "Who wants to rule against grandmotherhood, or apple pie, or Santa?" 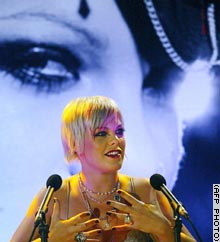 For those that haven’t heard, the female singer Pink (Alecia Moore) – who quite recently joined PETA in a protest against Kentucky Fried Chicken’s alleged cruelty to animals – has joined the ranks of musicians voicing their opinions against George W. Bush. In her song “Dear Mr. President,” Pink attacks, amongst other things, “No Child Left Behind,” his positions on abortion as well as same-sex marriage, his former drug and alcohol abuse, and, of course, the war in Iraq. Some of her more poignant lyrics include:

What follows are the complete lyrics of this piece along with a video link to a recent performance of the number courtesy of YouTube.

On Friday's Countdown show, MSNBC's Keith Olbermann plugged the Rolling Stone cover story by historian Sean Wilentz which argued that George W. Bush may be the worst President ever, citing the opinions of over 400 historians. As he introduced his interview with Wilentz, Olbermann sympathetically referred to the recently fired CIA employee who leaked classified information on the agency's use of secret prisons in Europe in the War on Terrorism, calling her a "whistleblower," and asked the question: "President Bush, whose administration is now firing, perhaps prosecuting whistleblowers, is he simply the worst?"

While introducing the segment, Olbermann listed several of Wilentz's attacks against Bush without challenging their validity, including accusations of "fabricated evidence" of WMD, a "retro fiscal policy" of "massive tax cuts" for the wealthy that "racked up monstrous deficits," and a criticism citing an unnamed Republican strategist who claimed that the Republican Party is "the first religious party in U.S. history." Olbermann, who perennially makes comparisons between George Orwell's novel 1984 and the Bush administration, managed to work in yet another reference to Orwell as he ended the interview mocking the administration's use of the term "pre-9/11 thinking," charging that Bush would accuse Wilentz and the other historians of being "guilty of pre-9/11 thinking, as George Orwell might have said." (Transcript follows)

On Monday’s “Countdown,” host Keith Olbermann demonstrated, as he regularly does, why he should have stuck to being a sportscaster on ESPN (hat tip to Michelle Malkin with video link to follow). In his “Worst Person in the World” segment, Olbermann chose Michelle Malkin for posting the names and phone numbers of UC Santa Cruz students that recently forced military recruiters off the campus.

Study: How Massive (And Tilted) Was Washington Post Alien-Rally Coverage?

The Washington Post coverage of Monday's pro-illegal-immigration rally was so massive and positive, it took time to study it all. To get a sense of how massive, let’s begin by paying attention to the resources deployed for the Tuesday paper:

Number of other Post staff writers credited for contributions from across America: 20.

On CBS, Harry Smith Oozes Over Aliens Draped In "The American Dream" 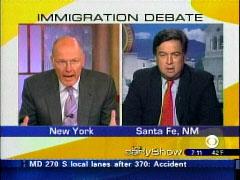 Yesterday, many people from around the country gathered in cities and demanded rights for illegal immigrants, and these protests were the primary focus of this morning’s "The Early Show" on CBS. In one segment, co-host Harry Smith interviewed Lou Dobbs, host of CNN’s "Lou Dobbs Tonight" and Bill Richardson, governor of New Mexico. Through his questions, Smith made it pretty clear where he stood on the immigration issue.

CNN senior political analyst Bill Schneider was eager to tout yesterday’s illegal immigration rallies as a "consciousness-raising moment" for Hispanics who harbor "resentment" against those who feel illegal immigration is a serious problem facing the United States. Schneider was discussing the effect of the protests on the 2006 mid-term elections with American Morning co-host Miles O’Brien:

Dan Gainor reports to me that the Norwegian paper Aftenposten noted that a "comedian" named Otto Jespersen took to his TV show to burn pages of the Old Testament, and riots did not ensue:

The burly, middle-aged Norwegian seems to have a thing for fires: He's perhaps best known for an American flag-burning stunt on national TV three years ago, to protest the US-led invasion of Iraq.