When does a protest that includes a total of approximately 45 people spread over 3 US cities merit national media coverage?  When the protest is anti-American and pro-terrorist.  That was the case of the “emergency” protests sponsored by Ramsey Clark’s International Action Center decrying the execution of Saddam Hussein.

Yet Another Poser (Mostly) Gets Through the Media 'Filter'

Yesterday, in his story about Rosemarie Jackowski, the "new folk hero" of the antiwar movement, John Curran of the Associated Press quoted a gentlemen who was arrested with Jackowski in a 2003 protest incident in Vermont:

She's not a loony toon by any means," said Andrew Schoerke, 73, a retired U.S. Navy captain who was arrested with her. "She's a very down to earth, sensible, caring person with some very strong convictions."

Dan Riehl has partially fisked the "sensible" Ms. Jackowski (he could have gone on, and on, and on ....).

But what about her "character witness," Mr. Schoerke?

I did a Google Main search on his name in quotes last night. At the time, the very first item (it has moved down since) was A May 19 column by Mr. Schoerke, "Stop Bush's Next War", which he believes to be Iran, and where he is described as follows -- "Andrew Schoerke, United States Naval Reserve Captain (ret.), lives in Shaftsbury, VT and is a member of vermontpeacetrain." At the very least, he's not just another "unlikely peace activist," as Jackowski is described in the headline.

Vermont Peace Train of Bennington is "a 'grassroots' organization formed by residents of Southwest Vermont in order to promote and practicethe non-violent resolution of conflicts." That's career peace activist-speak.

So that made me wonder if Schoerke has been arrested on other occasions. Googling "ex-Navy officer arrested" (not entered in quotes) -- Surprise, surprise (not), at the very first item, this guy's in the "big leagues":

Now that Peace Mom Cindy Sheehan has a rap sheet, it looks like the AP is preparing to give the world Peace Grandma, even if they have to lie to do it. Did you know that Americans don't want to "live next door to a Muslim", or that Americans want all Muslims to "carry special identification", or that it is but "Ignorance" that is seen as a "Key Problem" to these foolish American's "hatred" and misperceptions?

Reuters knew, if you didn't. And they are happy to let us all know about it, too.

The Hidden Agenda Behind the Pray-In

The six Imams removed from the US Airways flight last week after invoking Allah, carrying one way tickets with no baggage and voicing anti-American sentiments held their pray in protest at Reagan Washington National Airport.

A man poured gasoline on himself on November 3rd and on the side of the road on Chicago's Kennedy Expressway he lit himself on fire. It caused a traffic jam, but little else. In fact, no one even knew who the suicide was for several days until a friend of his got a letter sent him by the dead man just before his final day. 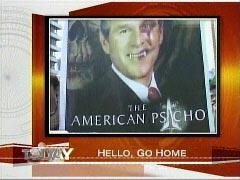 The network morning shows noticed Indonesian Muslims protesting President Bush, but sadly, once again, they tended to sanitize out the extremists. In this case, protest leaders called for the execution of Bush, but the networks mostly offered Americans quotes from protesters saying they loved America, just hated the president.

A group of active duty soldiers, called a "grassroots group" by some in the media, is speaking out against the war in Iraq and calling on Congress to bring the troops home. Fine with me - they have every right to speak their mind (I know nothing about the military rules - I'm speaking in the realm of First Amendment rights).  Having the freedom to speak out is one of the great benefits of living in the United States of America.

Cindy Sheehan became an instant liberal-media celebrity when she held a vigil outside President Bush's ranch in Crawford, Texas and demanded to meet with him (a second time) over the death of her son Casey in Iraq. But is the liberal media only about creating the legend and leaving the negative details out? 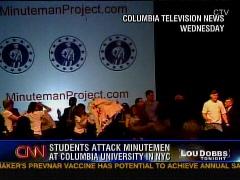 So much for strength (or newsworthiness) in numbers. Inside Wednesday's Washington Post, reporter Michelle Boorstein covered a tiny protest inside the Hart Senate Office Building yesterday, where 35 were arrested. Last week, as many as 35,000 people protested in New York in support of Israel and against Iranian leader Mahmoud Ahmadinejad, featuring speakers like U.S.

ABC Finds Hugo's Human Side: He's a Coffee Addict and Softy for Sinatra? 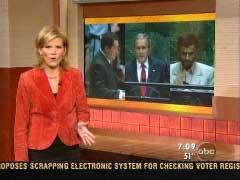 On ABC's Good Morning America Thursday, Venezuelan strongman Hugo Chavez's wild remarks at the U.N. about Bush being "the devil" were greeted as an opportunity to humanize Chavez.