Lauer ‘On the Prowl for Victims’ in Environmental Crusade

Be careful where you shop for groceries, for behind every canned soup display may be lurking "Today" show host Matt Lauer, ready to corner you on camera and demand to know whether you're using plastic, paper, or "environmentally-friendly" canvas bags.

That's what Lauer did for a January 25 segment to wrap up the four-day "Today Goes Green" series, which showed the hosts carpooling to work (once), changing one light bulb in one of their homes, and canceling unwanted catalog subscriptions online.

But for the grand finale, Lauer got in the face of the American grocery shopper in a segment filmed in a New York City Food Emporium. He pestered shoppers with tidbits about the environmental destruction caused by plastic and paper grocery bags.

"I'm on the prowl for victims, converts in our growing movement," Lauer said shamelessly, as if bothering people while they're shopping is cute. "Do you have any idea how many plastic bags you accumulate in the average month?" he asked one unsuspecting female shopper.

Scary sushi? That was the gist of Wednesday's front-page story by health reporter Marian Burros, "High Mercury Levels Are Found In Tuna Sushi Sold in Manhattan." A front-page photo caption warned: "Tuna sushi is a popular item in New York but may be risky."

It remains the Times's most e-mailed story as of Thursday afternoon, so it's no doubt an issue near and dear to the heart of Manhattan's liberal elite gourmands -- who might be just a little less sophisticated (at least in matters of science) than they think they are.

‘Do As I Say, Not As I Do’ Eco-warriors Are Worst Polluters

As many liberals subscribe to the "Do As I Say, Not As I Do" philosophy, it certainly shouldn't come as any great surprise that so-called eco-warriors that extol the virtues of a green lifestyle are actually the worst polluters.

At least, that is the conclusion of a survey of 25,000 people by the British research organization Target Group Index.

At the top of Thursday’s CBS "Early Show," co-host Harry Smith excitedly teased the upcoming segment: "From Bali, New York Mayor Michael Bloomberg in an exclusive interview as he's set to address scientists from around the world, gathering to stem global warming for generations to come." Later, co-host Julie Chen further hyped the story: "Well, ahead this half hour, New York City Mayor Michael Bloomberg with urgent news from the global warming conference going on right now in Bali."

In addtion, co-host Russ Mitchell did a news brief about the conference prior to the interview:

The European Union issued a warning today to the U.S. at a climate conference in Indonesia. It vowed to boycott U.S.-sponsored talks next month if the U.S. does not reach an agreement now on emissions cuts. Former Vice President Al Gore is addressing the conference right now. He says action is urgent.

Who is the biggest climate sinner? Not China, says the AP.

The Associated Press reported November 7 an interest group's findings that Saudi Arabia and the United States are the worst "climate sinners" for not taking drastic attempts to cut carbon emissions.

"You may have thought they were environmentally friendly just because the product says so, but some environmentalists think you're being ‘greenwashed,'" said host Steve Inskeep. "Is one of the sins just lying, then, basically?"

Scot Case of the environmental marketing firm TerraChoice conveyed that "the biggest sin [they] found ... was called ‘The Sin of the Hidden Tradeoff' for products that promote a single issue ... but there are a wide variety of environmental considerations."

TerraChoice evaluated 1,018 retail products for their environmental claims and only one was found to be without sin, while the rest were guilty of offenses like "The Sin of the Lesser of Two Evils," "The Sin of Fibbing" and "The Sin of No Proof."

CBS's Smith to Bloomberg: 'Manhattan Will Be Underwater by 2050'

On Monday’s CBS "Early Show," co-host Harry Smith interviewed New York City Mayor, Michael Bloomberg. The liberal mayor has followed in the footsteps of Al Gore and implored the government to take action to address an impending environmental crisis, saying "We need to do something now." To match Bloomberg’s alarmist rhetoric, Smith added "Manhattan will be underwater by 2050." Amusingly, even Bloomberg thought that assertion went too far, "There's a -- I don't know that Manhattan will be underwater, but certainly the environment's going to be a lot worse that we leave our children." Smith also pressed Bloomberg on a possible 2008 presidential run.

The interview began with Smith asking about Bloomberg’s proposal to impose a national carbon tax. Smith asked, "Who gets taxed?," to which Bloomberg responded, "People who generate carbon and put it into the air, that pollute the air that you breathe, and that I breathe, and that's causing worldwide changes over the long term in our environment." In other words, everyone. Far from challenging Bloomberg on how people would react to such a plan, Smith instead followed up with, "Something similar to this has been advocated for a long time, the sort of cap and trade...Why is yours better than theirs?" Smith’s assumption that Bloomberg’s plan is "better" is an interesting way of challenging such a policy.

There's nowhere to hide from NBC's omnipresent "Green Week," of which NB readers are sure to be hearing plenty in coming days. NBC's eco-activism even made its way into what you'd normally hope would be a refuge from MSM politics: football.

"Green Week" reared its head during NBC's broadcast of last night's NFL game between Dallas and Philadelphia, played in the City of Brotherly Love.

‘Planet in Peril’ Thanks to CNN Marketing Team

Last night on the Colbert Report, Stephen Colbert took CNN's marketing team to task, pointing out the hypocrisy of putting a "six foot square poster in each of the 2.3 million copies of today's the USA Today. That's 13.8 million square feet of ‘Planetary Peril.'" Planet in Peril a program airing next week on CNN. Colbert who could barely keep himself from laughing went on to say,

"Now the paper is recycled but hopefully that glossy ink isn't going to biodegrade anytime soon, so awareness of this threat is going to be around for centuries. Brilliant marketing CNN, you have strategically insured the planet will still be in peril by the time your special airs next week." 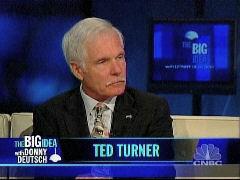 During an interview by "GQ" magazine's Wil Hylton posted on the magazine's blog on September 20, CNN founder Ted Turner blamed Fox News for pushing America into the Iraq war, tagging the conflict as "Rupert's war," and contended that he is more afraid of America's possession of nuclear weapons than he is of rogue states like Iran obtaining such Every now and then one has to read an article four or five times to actually believe someone could possibly write such nonsense.

The following item, from Time magazine's special report "The 50 Worst Cars of All Time," has to qualify as one of the most absurd pieces of...journalism I've come across so far this year (h/t NB reader Paul Head).

To set this up, it goes without saying that Ford's creation of the Model T represents a seminal moment in American history as it made cars affordable to the general population for the very first time, and caused a huge economic explosion in our nation.

Alas, that's not how Time sees it (emphasis added to really point out the stupidity):