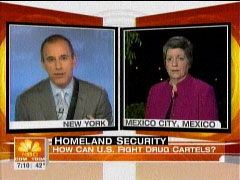 ANDREA MITCHELL: President Obama will not deliver long-promised Blackhawk helicopters, nor a ban on assault weapons smuggled south. He campaigned as a candidate against the assault weapons. Now that he's in office, he's had to back off.

FELIPE CALDERON: But most of the weapons, almost 16,000 are assault weapons and 90 percent of those were sold in United States.

Then Lauer, in his segment with Napolitano, repeated Calderon's inaccurate line that 90 percent of drug cartel weapons came from the U.S.:

Once again The New York Times unleashes a not-so-hidden agenda to its reading public. Here the Times is regurgitating the debunked claim that "90%" of Mexico's recovered guns used in crime south of the border are from U.S. gun dealers. There is a lot of misdirection in this piece against gun dealers and gun shows, as well. Contradictory claims are made with no proof offered but the say so of The Times.

The Times begins its tall tale by talking about Mexican gun smugglers that find it easy to buy "military style" weapons at U.S. gun shops to be smuggled into Mexico. The story talks of these "lightly regulated" gun dealers and blames them for the smuggling apparently because no records are kept or buyer's identities ascertained. And near the top half of the story is the debunked "90%" claim.

On Monday’s Countdown show, MSNBC host Keith Olbermann seemed to rationalize the actions of the Chile-based Marxist terror group MIR, as he compared one of the group’s followers who helped kidnap a Spanish businessman, and who is currently attempting to have Bush administration members indicted in a Spanish court on war crimes charges, to George Washington.

In response to FNC’s Bill O’Reilly, who last week pointed out that Gonzalo Boye, the attorney in Spain who is trying to have Bush administration members prosecuted, himself spent eight years in a Spanish prison for assisting the MIR, Olbermann suggested that the attorney’s involvement with the Chilean terrorist group was justified because the group's aim was to topple former dictator Augusto Pinochet.

But Olbermann did not mention that the crime Boye was convicted of being involved in was the 1988 kidnapping of Spanish businessman Emiliano Revilla, who was abducted outside his Madrid home and held eight months for ransom in a collaborated effort between the Chile-based MIR and the Spain-based ETA, another left-wing terror group which has perpetrated bombings and killed many in Spain. Olbermann responded to O’Reilly’s complaint that it was a "big omission" for a New York Times article not to mention Boye’s history by rationalizing Boye’s terrorist history. Olbermann: "Well, no, not as big an omission as forgetting to mention that the man whom Mr. Boye`s collaboration with terrorists targeted was the sadistic Chilean dictator Augusto Pinochet. This is like Bill-O calling George Washington a terrorist."

On the Monday, March 30, The O’Reilly Factor, FNC host Bill O’Reilly slammed the New York Times for not reporting that an attorney in Spain, Gonzalo Boye, who is trying to have Bush administration members charged with war crimes in a Spanish court, himself has served eight years in prison for "collaborating with terrorists," referring to the Chile-based MIR, and the Spain-based ETA, both left-wing terrorist groups. During his "Talking Points Memo," O’Reilly related: "The action is being driven by a man named Gonzalo Boye, a radical left lawyer in Madrid. On Sunday, the New York Times reported Boye's beef, but did not report this: Boye served almost eight years in a Spanish prison for collaborating with terrorists. He was sentenced in 1996. Now, that seemed to be a mighty big omission by the New York Times, does it not?"

But on the same night’s Countdown show, MSNBC host Keith Olbermann informed his viewers of the possible indictment in Spain without mentioning Boye and his terrorist connections. Introducing a discussion with George Washington University Professor Jonathan Turley, Olbermann announced: "The first steps towards opening a criminal investigation against the Bush administration about torture is now under way, only it`s not by the U.S. government but by Spain. The New York Times reporting a Spanish court now building a case against six high-level Bush officials." 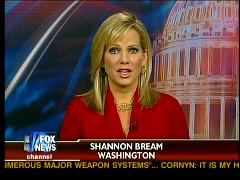 On Friday’s Special Report with Bret Baier, FNC correspondent Shannon Bream informed viewers of a letter written to Attorney General Eric Holder from 65 House Democrats who oppose the Attorney General’s recently expressed wish to "reinstitute the ban on the sale of assault weapons" to try to reduce violence by Mexican drug cartels. Bream further relayed the recommendations of Democratic Senators Max Baucus and Jon Tester, both from Montana, that the Obama administration should focus on enforcing current gun laws.

Below is a complete transcript of the report from the Friday, March 27, Special Report with Bret Baier on FNC:

Thus far, Secretary of State Hillary Clinton has made two diplomatic blunders during her visit to Mexico that the U.S. Old Media are shockingly uninterested in highlighting. One was a policy blunder and the other a cultural/religious one.

Clinton's first mistake was in imagining she is still a Senator that can make pronouncements on pending laws and policy plans instead of a mere envoy of the president, a mouth piece that hasn't the same freedom to invent policy prescriptions and laws that a Senator does. Last week, Clinton told Mexican officials that "we" -- as in the U.S. government -- are considering re-upping the so-called assault rifle ban because Mexico's drug violence is "our" fault.

CBS’s Logan Praises Hillary Clinton: She’s ‘Come Into Her Own’ 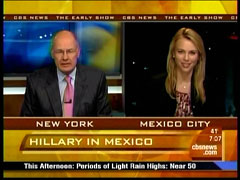 While reporting on Secretary of State Hillary Clinton’s trip to Mexico to address the escalating drug war, on Thursday’s CBS Early Show, correspondent Lara Logan gave a glowing review of Clinton’s job performance so far: "Well, she seems very much at ease. That's one of the things that struck myself and other journalists dealing with her in her new role. She has almost come into her own. She's very open, very direct, taking a lot of time. One particularly important thing to note is that she takes a lot of time to meet with local women and young people, disadvantaged groups...she wants to hear from ordinary people. She finds it very useful to hear from the man on the street."

Logan went on to explain how much effort Clinton puts in to meeting with the "ordinary people": "...that's not a small achievement when you consider the time pressures on trips like these. They're very fast-paced and there's a lot of pressure. And so the fact that Hillary makes this special effort to talk to people is actually noted and appreciated wherever she goes." 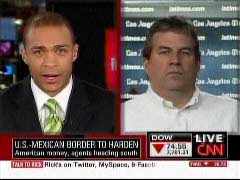 On Tuesday’s Newsroom program, T.J. Holmes because the latest CNN on-air personality to forward the dubious claim that guns from the U.S. are a major factor in the rampant drug violence plaguing northern Mexico: “I don’t want to say enabling, maybe not the best word. But still, so many of the guns that are being used in Mexico are guns that come across the border from the U.S.”

His guest, columnist Sam Quinones of the Los Angeles Times, wholeheartedly agreed: “...[W]e can do a lot about the guns.....If you talk to Mexican officials, pretty much they don’t want to talk about anything but all the guns that are coming....down to Mexico and into the hands of cartel guys who are then killing cops, terrorizing a population, and killing off each other and so on.”

Call Out the Instigators

By David Gerstman | February 10, 2009 1:55 AM EST
An article in yesterday's Washington Post, Jews in S. America Increasingly Uneasy, seemed to be an admirable attempt to expose a growing problem in South America. Unfortunately, on closer inspection, the article is a major disappointment.

I suppose the Associated Press wants us all to feel sorry for Mexico. With so many illegals here either having trouble finding work or actually returning home, Mexico is finding that its citizens illegally in the US have fewer American dollars to send home. AP says the "situation is so serious" that the Mexican government is trying to create new programs to reinforce ties between illegals here and its citizens at home. Of course, no where in AP's story does it seem to occur to anyone that Mexico clean itself up and offer opportunities there as opposed to trying to squeeze money from people here.

The whole story is reported as a legitimate economic issue instead of the thievery by illegals that it really is. The AP sternly informs us that as the "economic crisis worsens" Mexico finds that the money sent home is at "record lows." And we are treated once again to the euphemism for this theft of American dollars that is doled out in every such story. The AP calls this sending of American money back to Mexico a "remittance revenue stream," as if it is some sort of legitimate economic matter. It's a great way to gussie up the word "theft," isn't it?

The truth is that the Mexican government is trying to undermine our nation yet the AP treats this as if it is just an average story.

A Colombian associate of House Speaker Nancy Pelosi (D-Calif.) is once again linked to FARC terrorists and Marxist Dictator Hugo Chavez with the revelation of damning new messages concerning Colombian Senator Piedad Córdoba that are currently being investigated by Colombian military officials. Once again we have a powerful American politician, this one the Speaker of the House of Representatives, linked to those attempting to institute Marxist regimes to our South. Why does the U.S. media steadily ignore the ties Speaker Pelosi has to Chavez and the terrorist group FARC through her association with Senator Córdoba? Isn't it awfully big news that the Speaker of the House supports a foreigner that wishes to give more power to one of our biggest enemies in this hemisphere and to further the efforts of a decades old terror outfit?

Córdoba, who has worked closely with Pelosi on Colombian and Venezuelan issues, has been linked to terrorists and Marxists in the past and has been a key player in helping undermine her own government. Senator Córdoba is prominently mentioned in these emails and documents as attempting to create a "friends of Chavez" style movement in Colombia. This movement was also organized with the assistance of leaders of the Bolivarian Movement, a FARC sponsored terror group.

On Tuesday, an Associated Press article featured on MSNBC.com and briefly as a top headline on the popular internet homepage MSN.com was titled: "McCain linked to group in Iran-Contra case." The subtitle read: "Organization had ties to former Nazi collaborators, right-wing death squads." The article attacked a group founded by retired U.S. General John Singlaub: "The U.S. Council for World Freedom was part of an international organization linked to former Nazi collaborators and ultra-right-wing death squads in Central America. The group was dedicated to stamping out communism around the globe."

The AP appears to be getting its story tips from the Obama campaign, as Boston Globe deputy national political editor, Foon Rhee, reported: "The Obama camp today is sending around reports on Singlaub, founder of the US Council for World Freedom, which was involved in the Iran-Contra scandal during the mid-1980s and was criticized for supposed links to Nazi collaborators and right-wing death squads in Central America." The AP article justified reporting on the tenuous McCain connection by explaining: "McCain's ties are facing renewed scrutiny after his campaign criticized Barack Obama for his link to a former radical who engaged in violent acts 40 years ago."