Yesterday former Rep. Artur Davis -- who served in Congress as a Democrat but recently became a Republican out of frustration with the Obama administration -- was a featured guest of the Heritage Foundation's weekly blogger briefing.

Davis briefly discussed the similarities between the upcoming election and the election of 1980. He claimed that Ronald Reagan had to make the American people realize that what the Carter administration was doing was ruining the economy and that Mitt Romney will have to make a similar case regarding President Obama.

Last week, CNN's Steve Kastenbaum (podcast is also at link) visited what he characterized as Occupy Wall Street's "nerve center" (but don't call it a "headquarters," Occupiers insisted) in space provided by an anonymous donor. No, it wasn't at Zuccotti Park or any other open-air location. It was, and presumably still is, in Lower Manhattan, one block south of the New York Stock Exchange.

Along the way, Kastenbaum interviewed several people who portrayed themselves as "volunteer staff" for a supposedly leaderless movement, but as is par for the course in the establishment press when leftists are involved, didn't reveal anyone's previous background. At Heritage, Lachlan Markay reports at Robert Bluey's blog that the prior affiliations and involvements of at least a few of those interviewed belies their starry-eyed self-portrayal:

The dictionary definition of "stimulate" relevant to a nation's economy is "to rouse to action or effort."

We still have journalists who gullibly relay the notion that extending unemployment benefits and increasing entitlement programs will "rouse" the economy "to action of effort," despite almost three years of evidence that such is not the case. One of them is Andrew Taylor, a writer for the Associated Press, who, in his unprofessionally titled ("Deficit deal failure would pose crummy choice") and painfully long writeup about the supercommittee's lack of action or effort in Washington, wrote the following:

Somebody needed to give Calvin Woodward and Christopher Rugaber at the Associated Press Five-Hour Energy drinks or some other boost before Tuesday night's GOP debate. Their brains must have totally turned off late in the  afternoon without re-engaging before they filed their late-evening post-debate report.

Behold how the AP pair "proved" that excessive government regulation doesn't kill jobs (bolds are mine throughout this post):

On Monday, in a story I will link after the jump, the Associated Press reported that on March 1 the  Milwaukee Teachers’ Education Association (MTEA) dropped a lawsuit it initiated last year over the school district's refusal five years earlier to cover a prescription drug the union described as "an issue of discrimination, of equal rights for all our members” (that link will also appear after the jump).

So the questions submitted for our readers to ponder are these:

1) What drug was involved?

2) How much has the district spent defending itself against the lawsuit?

In the midst of outcry that Wisconsin teachers were skipping school to protest the governor's new budget bill and demand collective bargaining rights, NBC's Norah O'Donnell provided the teachers' motives as an argument for their side. She failed to mention why Wisconsin Gov. Walker cut into their benefits in the first place.

Covering the story on MSNBC's "Andrea Mitchell Reports," O'Donnell remarked that "I know there are some that think this is a travesty for the schoolchildren of that state." She added, however, "But these teachers are talking about their pensions, and they're worried about having to pay more for their health care costs, right?"

The explosive debate has featured voices from the left and right crying about the compensation Wisconsin public employees receive and what they pay in, compared with that of private sector workers. The conservative Heritage Foundation explains that Wisconsin's budget was already in the red, and that state employees enjoy generous benefits that many other citizens don't. 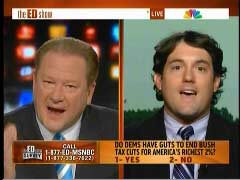 During the past week, MSNBC’s Ed Schultz had trouble acknowledging that allowing a tax cut to expire, in effect, is a tax increase, as he debated on the Ed Show the issue of whether the tax cuts passed during the Bush administration – due to expire at the end of this year – should be extended beyond 2010. On Tuesday’s show, even while noting that the top marginal rates would increase from 35 to 39 percent, Schultz absurdly claimed: "The bottom line is they want you to believe that letting the Bush tax cuts expire is a tax increase. ... The Republicans are saying that, hey, this is all about a tax increase. No, it`s not. It`s the law they put into effect. It`s the law that they signed. It`s the law that they pushed under President Bush. It had an expiration date. Now they’re coming back saying, well, it`s a tax increase. No, it`s not. People in the top two percent are going to go from 35 percent to 39 percent. Ninety-eight percent of Americans are not going to be affected."

The MSNBC host also insisted on the semantics of calling an extension of the tax cuts "cutting taxes," even though such an extension would, in effect, leave rates the same and merely stop rates from increasing in 2011. Schultz went on to deceptively claim that the Heritage Foundation’s Curtis Dubay, appearing as a guest on Tuesday, had agreed with him that "cutting taxes" does not create jobs. On Wednesday’s show, during a discussion of financial reform, after guest Stephen Sprueill of the National Review spoke in favor of extending the Bush tax cuts, Schultz misleadingly shot back: "No, it doesn`t work. And it`s not a job creator, and the Heritage Foundation guy was here last night admitting that cutting taxes is not a job creator."

When a protectionist law is enacted and nearly a century later it is inhibiting a recovery from major ecological catastrophe, it's probably time to scrap it or at least temporarily waive it.

But instead a nearly century old provision known as the Jones Act of 1920 is wielding the wrath of unintended consequences. According to the Heritage Foundation, this protectionist measure was put in place to defend the American maritime industry, but is endangering far more jobs than it is protecting.

"The Jones Act, which is supposedly about protecting jobs, is actually killing jobs," Heritage co-authors James Dean and Claude Berube wrote in a June 8 The Foundry post. "The jobs of fishermen, people working in tourism and others who live along the Gulf Coast and earn a living there are being severely impacted. There are also additional private sector jobs which are NOT being created in the United States since the Jones Act effectively prices U.S. based companies out of the ability to be competitive on the competitive global market. As we strive to develop new technologies for a cleaner environment at sea, the Jones Act continues to hobble our own capabilities, sometimes with devastating results." 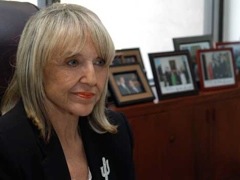 About 45 minutes ago, Red State's Caleb Howe reported that a package filled with a white powder was sent to the office of Arizona Governor Jan Brewer. Brewer, picture right in a file photo, has become a controversial figure since she signed into law a bill giving state authorities more power to determine an individual's immigration status.

Andrew Staubitz, the chief of Phoenix's Capital Police Department, told Howe that a state employee opened an envelope addressed to the Governor and found a "powdery white substance." The first floor of the Arizona Capitol was closed for about half an hour. Paramedics were called, but the employee required no further medical assistance. The powder was sent to a lab where it is undergoing tests.

Will the media report this event as vehemently as they have other instances of purported political violence?  Will they extrapolate a larger threat posed by opponents of the new immigration law as they repeatedly have with the Tea Party movement (even though it has been completely devoid of violence)? Or will they apply the journalistic scrutiny to this incident that they failed to apply to the claims of members of Congressional Black Caucus who said protesters had shouted racial slurs at them? We will see.

Over the past two years, MSNBC - the so-called "place for politics" has had a fascination with the congresswoman from Minnesota's Sixth District.

And some of those attacks have been against her family, others borderline misogynistic. However, GOP Rep. Michelle Bachmann told a group of conservative bloggers at The Heritage Foundation on Oct. 6 she really wasn't concerned about MSNBC, and noted how poorly the network does in the ratings.

"Quite honestly, I don't even know anything about MSNBC," Bachmann said. "It's not a network that I watch and most of the American people agree with that assessment. They aren't watching it either. And that's why Fox's ratings - I mean it's like CNN, CNBC, MSNBC combined. I think Fox even exceeded one of the major networks last week. They're on the ascendency."

A 1993 Heritage Foundation Executive Memorandum made points (HT to Jay Ott at Maggie Thurber's blog) that have seldom been made in media discussions, like this really weak front-page article a week ago at the Toledo Blade, about reinstating the so-called Fairness Doctrine. The Blade's Kirk Baird and Rod Lockwood seem to act as if radio is the only communications medium in existence.

Heritage's points are even more valid today than they were 16 years ago.

At the time, which "so happened" to be the first year of the last Democratic administration, there was legislation in Congress called the "Fairness in Broadcasting Act of 1993" that would have restored the doctrine, which had been overturned by the Federal Communications Commission in 1987.

Here are the three faulty premises highlighted by Heritage's Adam Thierer, followed by why they are even more faulty now: