Video Flashback: In 2008, CNNers Derided Eliot Spitzer as a ‘Self-Righteous,’ ‘Holier-than-Thou’ ‘Narcissist’ with ‘No Remorse’ 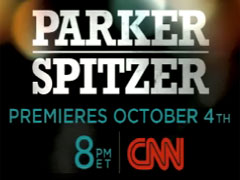 Monday brings the debut of CNN’s new “Parker Spitzer,” an 8pm ET political discussion program hosted by columnist Kathleen Parker and the ex-Democratic Governor of New York Eliot Spitzer, who resigned two years ago in the midst of a prostitution scandal.

The new show was championed by then-CNN President Jonathan Klein, who was fired by the network on Friday. “Eliot Spitzer still has a lot of ideas to contribute and a lot of things to say. And I think our viewers are going to find him a very interesting person to tune into every night,” Klein enthused back on June 27 on CNN’s Reliable Sources.

As a reality check on CNN’s effort to rehabilitate this scandal-scarred liberal, MRC intern Alex Fitzsimmons and I pulled together quotes from CNN’s coverage of Spitzer’s scandal back in March 2008. MRC video editor Bob Parks turned the clips we found into a polished video presentation documenting how the infamous “Client #9” was mocked and derided by the anchors and correspondents who are now his colleagues. (Video after the jump)

Comic on CBS 'Early Show': Americans 'All to Blame' for Oil Spill, Being Energy 'Pigs'

By Kyle Drennen | June 7, 2010 2:57 PM EDT
Promoting his latest HBO special on Monday's CBS Early Show, comedian Robert Klein turned his attention to the Gulf oil spill and who's to blame: "...we're all to blame. We're pigs. It's a parable for us. American pre-eminence is not guaranteed and unless we learn that this stuff has dangers – where are all those 'drill, baby, drills' now?" [Audio available here]

Those comments were prompted by co-host Harry Smith remarking: "BP would be such a spectacular target for your lampooning." Klein went on to add: "...all that oil that's fouling everything, it probably wouldn't run the automobiles in Texas for one day." Smith chimed in: "An hour." Klein proclaimed: "...it's minuscule, that's how much we use of that stuff. So let's get off it. I mean, and it's coming back to us in bullets, everybody knows this. But Americans have a memory of about 12 seconds."

On CBS's Sunday Morning program, a 'Fast Draw' segment by cartoonists Mitch Butler and Josh Landis similarly scolded Americans for wasting energy. Landis warned: "Our hunger for energy is driving oil companies to drill deeper and more dangerous wells..." Butler remarked: "Thankfully, these days everyone's talking about going green and saving energy. We know to ride bicycles to work instead of driving a car, don't use that air conditioner on a hot summer day. Air travel uses way too much energy. So don't take that vacation." However, Landis lamented: "...most Americans don't make enough of these kinds of sacrifices to save a meaningful amount of energy."

Today, the Associated Press generally did what is supposed to do when reporting on scandal-plagued politicians. Here are the first five paragraphs of the AP's brief report on Indiana Congressman Mark Souder's resignation announcement (link is dynamic and will probably be updated; "where's the worst one we can find?" picture of Souder at top right is via AP):

Here's the opening of the coverage at the New York Times's Caucus Blog (also subject to possible updates):

Sure, she's made some mistakes. But now Ashley Dupre, the former escort who brought down Gov. Eliot Spitzer, is sharing what she's learned in her new sex, love and relationship column -- exclusively in the New York Post. Is your husband cheating? Is your daughter on a dangerous path? Our readers asked -- and Ashley fired back with her no-nonsense advice.

I guess all of Tiger Woods' mistresses should take heart, for it appears in America today being the other woman can really pay off.

The Post even created a video to advertise its new columnist (video embedded below the fold, h/t Mediaite):

SNL: Cheating Politicians Don't Get The Airplay Tiger Woods Does

The program's producers also opted not to include disgraced former Democrat Governor of New York Eliot Spitzer in the group.

Despite the absurdity of suggesting that Ensign and Sanford's respective affairs were under-reported by the press, "SNL" writers completely avoided the fact that the news media, with the exception of the National Enquirer, boycotted Edwards' affair until after Barack Obama had been declared the Democratic presidential nominee (video embedded below the fold with partial transcript, h/t Story Balloon): 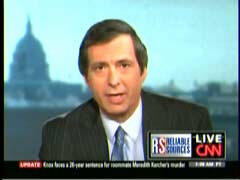 Note: See update in bold below.

On Sunday’s Reliable Sources, CNN's Howard Kurtz brought up the scarcity of media attention paid to the revelation that high-profile Democratic Senator Max Baucus nominated his girlfriend to be a U.S. attorney for his home state of Montana, as the CNN host even took to task CNN for ignoring the scandal, calling it a "stunning lapse in judgment," and recounted that he had monitored the news channel on Saturday and did not see Baucus mentioned.  Kurtz: "Washington Post has it on page three, New York Times has it on page 33. I watched CNN all day yesterday. I didn’t see any mention of this story, which I thought was a stunning lapse in judgment."

When Kurtz questioned why there was so little media attention, guest Chip Reid of CBS News asserted there was "no scandal" in the story. Reid: "I don’t think it has legs because there’s no sex scandal, and it’s not like Vitter. It’s not like Ensign. There’s no scandal here."

Update: It turns out that CNN increased its attention to the Baucus scandal on Sunday. For more, see "CNN Catches Up On Baucus Scandal & Labels As Dem More Than Other Nets."

Want to make a big splash to bolster your chances in a political campaign? A tried and true strategy for some attorneys general has been to champion a populist position by exploiting the legal system for publicity. Just look at the lead up to the launch of former New York AG Eliot Spitzer gubernatorial campaign with his attacks on Wall Street.

However, CNBC's Michele Caruso-Cabrera wasn't afraid to ask Brown if that was indeed the case in an Oct. 20 interview on CNBC's "Power Lunch."

By Kyle Drennen | June 29, 2009 12:41 PM EDT
While discussing the appointment of Sonia Sotomayor to the Supreme Court on MSNBC Monday, guest Eliot Spitzer made a startling observation: "Democratic presidents nominate very centrist justices to the Supreme Court. The Republican presidents over the past 10-15 years have nominated very extremely conservative justices and that’s why the court has eschewed to the right."[audio available here]

Spitzer, the former Governor of New York who resigned from office in 2008 amid a sex scandal with a prostitute, went on to lament the unwillingness of Democratic presidents to appoint more liberal justices: "And the role of the Democratic judges – justices – has been to play the middle... And that is, I think, at a larger ideological point, a discussion we should have, because Democratic presidents have been hesitant to put really liberal justices on the court."

MSNBC anchor Dylan Ratigan, who was premiering his new show "The Morning Meeting," did not challenge Spitzer’s absurd assertions, but rather turned to Washington Post editorial writer Jonathan Capehart and asked: "Yeah, Jonathan what do you think about that? That the Republicans have papered it with very conservative judges and that Democrats have tried to go more middle or slightly left of center, as opposed to way left judges?" Capehart agreed with Spitzer: "Well look, I respect everything my – Governor Spitzer says."

CNBC's Cramer: 'Remember When Business Was on the Front Page?'

While much of the country has been captivated by the passing of pop star Michael Jackson, the scandal of South Carolina Gov. Mark Sanford and turmoil in Iran and Iraq, business news has fallen off the front pages.

That was the observation CNBC "Mad Money" host Jim Cramer made on the June 26 broadcast of "Street Signs." Cramer noted that the front page of the June 26 New York Times was entirely devoid of business news.

"Remember when business was on the front page?" Cramer said. "We were on the front page for awhile. It was really frightening. It's still off - our whole, our whole - the whole stock market, the economy, we're all off the front page. We're no longer important because lovers, this guy Sanford - I'm not that familiar with his story. Those two people in Pennsylvania that were on the ‘Today' show and all those others."

Gov. Mark Sanford of South Carolina confessed to adultery with a woman in Buenos Aires Wednesday, after raising eyebrows by disappearing over the weekend, and then misleading the public about his whereabouts.

But for the New York Times, there was more to the tale than the political meltdown of a promising Republican presidential candidate for 2012. Sanford's affair gave the paper another chance to round up recent (and not so recent) stories of Republican misdeeds and controversies and suggest they (once again) spelled doom for the party. Enter reporter Jim Rutenberg's Thursday story, "Sanford Case A New Dose Of Bad News For G.O.P." 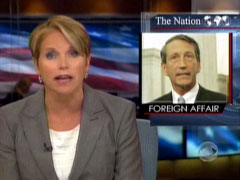 In the wake of South Carolina Governor Mark Sanford’s admission to having an affair, evening and morning newscasts on NBC, CBS, and ABC all immediately identified him as a Republican. In contrast, in March of last year, the networks rarely identified disgraced New York Governor Eliot Spitzer as a Democrat in the wake of his affair with a prostitute.

In a 2008 study of evening and morning network newscasts following the Spitzer scandal, NewsBusters’ Rich Noyes found that within the first week of news coverage Spitzer was only identified as a Democrat 20% of the time. However, within the first 24 hours of Sanford’s confession to having an affair, he was identified as a Republican 100% of the time, during coverage on all the networks.

On Wednesday, the NBC Nightly News, which failed to give Spitzer’s party affiliation for three days following his scandal, immediately focused on Sanford’s national role in the Republican Party as anchor Brian Williams declared: "In a Republican Party hungry for young stars, he was one of them: Mark Sanford, the governor of South Carolina...Tonight his political career is in tatters. His state, his party are in some turmoil. And Mark Sanford is no longer being mentioned as a possible GOP nominee for the White House."