USA Today practiced a “rip and read” of liberal talking points on winter heating costs with it’s headline for Richard Wolf’s December 12 story, “Some may face choice: Whether to heat or eat." Wolf’s article centered on critics of the Agriculture Department’s (USDA) decision to deny the requests of five states for a boost in food stamps spending.

Waiting for January to find a new job?

If you need a job, you might not want to just sit around for a month waiting for one to fall in your lap, because as Newsday so insightfully points out, it might not happen even then.

Newsweek: “Bush Might Be The Most Isolated President in Modern History”

The latest issue of Newsweek featured an almost 4,000 word article – written by Evan Thomas and Richard Wolffe, with assistance from Holly Bailey, Daniel Klaidman, Eleanor Clift, Michael Hirsh and John Barry – that painted a pretty bleak picture of President Bush as possibly being “the most isolated president in modern history.” The authors referred to Bush as being in a “bubble” that blocks out thoughts, policy suggestions, and ideas that he is either unwilling or intellectually incapable of absorbing. Some of the lowlights:

A front page New York Times story on the global warming talks in Montreal chose to place all the blame for America’s refusal to move forward with the highly controversial Kyoto Protocol on the Bush administration. In doing so, the Times didn’t inform its readers about the history of this accord, and, in particular, that the Senate in July 1997 voted 95-0 against it.

How does one analyze the economy's performance without considering tax policy?

In a column posted on the afternoon of December 8 at MSNBC's web site, James C. Cooper and Kathleen Madigan of Business Week Online devote over 1,100 words to analyzing and explaining the current strong economy, and fail to cite the 2003 Bush tax cuts as a possible contributing factor. In fact, the words "tax," "Bush," and even "government," do not appear at all!

Of particular interest, Simpson notes that Weisman fell hook, line, and sinker for a flawed study by a handful of Federal Reserve economists. Portions in bold are my emphasis:

After a month of hounding President Bush for low poll numbers, Thursday’s “Early Show” on CBS ignored their own network's poll showing President Bush’s approval rating has improved by five points over the last month. But a month ago, when a CBS poll found lower ratings for the President, the “Early Show” mentioned it two days in a row.  CBS’s Bill Plante was quick to point out that among modern Presidents; only Richard Nixon was lower at this point

A recent report  published by the Gallup Organization stated:

“a majority of U.S. investors continue to describe the current economy as being ‘in a slowdown’ or ‘recession’ as opposed to being ‘in a recovery’ or ‘sustained expansion.’”

Regardless of continuously strong economic reports, such bearish assessments have been regularly portrayed by public opinion polls for several years. During this period, economists and politicians – including the Bush administration – have wondered what is responsible for this disconnect between perception and reality.

A detailed look at how unemployment numbers are shared with the public by mainstream media outlets gives us some clues. The Labor Department on Friday announced very strong employment gains for the month of November. In fact, this was the largest number of job creations since April. However, this news was reported to the public in a fashion that largely downplayed its significance. A 3.2 percent annual increase in wages was characterized as employees “basically treading water.” Although energy prices have been steadily declining since September, jobs market stories included references of this still being a “huge concern.” Other news accounts referred to the unemployment rate being “stuck at 5 percent,” as if a 5 percent unemployment rate is a bad thing, while one cable news outlet told viewers to take the numbers “with a grain of salt.” 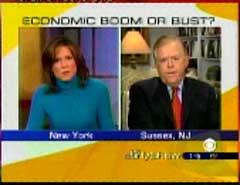 Yesterday, CBS Early Show co-host Hannah Storm asked White House aide Dan Bartlett about how most Americans think the economy is tanking: "Finally Dan, quickly, I know you came on to talk about the economy today, the President is going to address this today, there are some positive numbers but we have Ame

In Sunday’s Washington Post, Stephen Pearlstein noticed in his "Sunday Briefing" (page F-2) that "The Economy Grabs the High Ground," as the headline said. He wrote: "Defying hurricanes and inflation, rising interest rates and political gridlock, the U.S. economy demonstrated its remarkable strength and stamina last week." Despite the drama implicit in that sentence, the Post’s editors buried the news inside the paper.

“I know, Dan, the President’s giving a speech on the economy coming up, but there are people, including Alan Greenspan of the Fed, and also the GAO, the top auditor in the country, who have said with these deficits, these mounting deficits, it is simply hard to look at this economy as anything but on thin ice, no matter what. No new taxes?”

Don't miss my latest at the Free Market Project:  Contrary to the media’s pessimistic forecasts for the Christmas shopping season reported by the Free Market Project in late October, strong retail sales this Thanksgiving weekend got the annual end-of-the-year buying bonanza off to a bang. In fact, the economic data available prior to this weekend looked so strong that the National Retail Federation, the world’s largest retail trade association, actually raised its sales forecast for 2005 holiday shopping from a 5 percent year-over-year increase to 6 percent.

Regardless of this upgrade in expectations by retailers themselves, and the fabulous start to the shopping season, the media continued to rain on everybody’s parade.