By Ken Shepherd | March 21, 2006 10:31 AM EST
As millions of college students enjoy spring break, a respected employment firm gave them an early graduation gift: a report showing that the class of 2006 faces the best labor market in five years. But while the media frequently relay reports from Challenger, Gray, and Christmas, the new report has largely been ignored in the media. Reuters news wire reported on March 20:

CNN to Viewers: Why Aren't You Scared Yet?!

Following shortly after a segment discussing a poll showing 59 percent of Americans believe the economy is doing well, CNN's "In the Money" crew wondered why Americans were not scaring easily with fears of a bird flu pandemic. [For article, click here.]

On the Wal-Mart watch: Slate.com wondered "Is Whole Foods Wholesome," in a March 17 posting by The New Yorker's Field Maloney which found a left-wing use for Wal-Mart's constant evolution and innovation to capitalize on market trends and expand revenue. Maloney argued that if not for Wal-Mart's entry into selling organic groceries, "poor" Americans will be doomed by obesity-inducing non-organic, highly-processed foods while "rich" Americans might well shop at boutique organic outlets like Whole Foods. 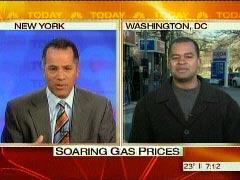 Have a look at the chart at the bottom and answer one simple question: what's the biggest gasoline-price story over the last six months? Sure looks as if it was the way gasoline prices nose-dived about 80 cents from September to November. Remember all those MSM stories highlighting the plunge? Neither do I.

A new book by veteran New York Times economics reporter Louis Uchitelle calls for a doubling of the minimum wage. “The Disposable American: Layoffs and Their Consequences" goes on sale next week, but judging by the early reviews and official description, it will be faithful to Uchitelle’s liberal reporting on economics and business:

By Amy Ridenour | March 17, 2006 2:42 AM EST
The New Republic has a "by the editors" editorial in the March 20 issue calling on the government to provide "universal health care." No surprise there.

Despite Poll Numbers to Pray For, NBC Sneers at Power of Prayer 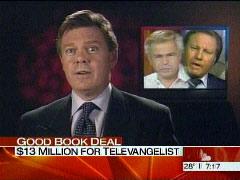 You'd think that of all days, they'd be believers over at Today this morning. After all, they were blessed with presidential poll numbers for which they were surely praying.  Numbers so low that Matt Lauer, Tim Russert et. al could spend an extended first segment reveling in them.

Several outlets frown on 243,000 new jobs, but others show improvement in coverage of monthly jobs report.

As good a month as February was for Americans looking for work, some media continued to do a sub-par job of informing the public about the condition of the nation’s labor market – even as almost a quarter of a million new positions were created. Although the overall coverage was better than last month and throughout 2005, some of America’s leading media outlets downplayed the fabulous news released by the Labor Department on March 10, while “The Most Trusted Name in News” largely ignored it.

While Wall Street cheered the great news – the Dow Jones Industrial Average rallied by 104 points after the announcement – ABC and The New York Times weren’t content to allow people to celebrate for very long. Instead, The Times began downplaying the good news in the first sentence of its March 11 article, stating the report was “igniting concerns” on Wall Street “that higher wages could fuel inflation.”

And, though ABC’s “World News Tonight” led with this story on the evening of March 10, it finished its report discussing those still having a hard time finding work, suggesting that this “may account for why 57 percent of Americans in our ABC polling say this economy is bad.”

The average American’s net wealth is the highest in history. More Americans own their home than ever in history. Unemployment is currently lower than the average of the previous three decades. The average weekly pay for non-supervisory production workers has increased by almost 16 percent in the past five years while inflation has risen by 13 percent.

A charismatic anti-American dictator commands a South American country's large state-owned oil reserves and rails frequently against American capitalism, yet the media coverage of his human rights abuses and his threats to the United States ranges from little to none.