Heard anything about Barack Obama's sleazy online fundraising, where thanks to purposely lax security measures his site is able to receive untraceable donations from obviously fake names? Not if you've been reading the print edition of the New York Times.

The Washington Post has run two stories, most recently on Wednesday: "Obama Accepting Untraceable Donations: Contributions Reviewed After Deposits." Post reporter Matthew Mosk explained how the Obama campaign isn't taking the most basic steps to ensure the validity of the online donations made to the campaign:

Faced with a huge influx of donations over the Internet, the campaign has also chosen not to use basic security measures to prevent potentially illegal or anonymous contributions from flowing into its accounts, aides acknowledged. Instead, the campaign is scrutinizing its books for improper donations after the money has been deposited.

Those two Post stories mark a Woodward-and-Bernstein level of intensity compared to the Times's treatment. A search indicates that the Times has published zero stories in its newspaper on recent revelations concerning the Obama campaign's avoidance of basic security measures to stop illegal contributions. 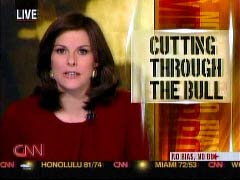 On Tuesday's Election Center program, CNN anchor Campbell Brown criticized Barack Obama's decision earlier this year to break his November 2007 pledge to accept public financing of his presidential campaign: “For this last week, Senator Obama will be rolling in dough. His commercials, his get-out-the-vote effort, will, as the pundits have said, dwarf the McCain campaign's final push. But, in fairness, you have to admit, he is getting there, in part, on a broken promise.”

Brown's attack, which she made in her regular “Cutting Through the Bull” commentary at the beginning of her program, came 24 hours before Obama is scheduled to run a 30-minute infomercial on five television networks. She began her commentary by describing how “Barack Obama is loaded, way more loaded than any presidential candidate has ever been before at this stage in the campaign. Just to throw a number out, he's raised well over $600 million since the start of the campaign, close to what George Bush and John Kerry raised combined in 2004.”

Three men brought together by their love for American freedom and opposition to communism played a critical, though largely unheralded role, in introducing Ronald Reagan to a national audience, a new book on the conservative movement explains.

Holmes Tuttle, the owner of a Ford dealership in Los Angeles; Henry Salvatori, the founder of Western Geophysical Company; and A.C. "Cy" Rubel of Union Oil Company formed the original "Kitchen Cabinet" of allies and friends to Reagan.

Their story is told in a new book entitled: "Funding Fathers: The Unsung Heroes of the Conservative Movement." Ron Robinson, executive director of Young America's Foundation (YAF) and his co-author Nicole Holpin, point out that behind the scenes key individuals made strategically important financial contributions to that conservative cause.

If John McCain had gone back on his promise to accept public campaign money, and instead set fundraising records that put him as many as fourteen points ahead in the polls with less than two weeks to go before Election Day, do you think there'd be a lot of media carping and whining about rich Republicans buying the White House?

Probably 24 hours a day, seven days a week until the final vote had been counted, correct?

Yet, despite Barack Obama having gone back on his campaign promise to accept public funds, and reports that he's now over $600 million in contributions, the Obama-loving press don't seem very concerned with liberals buying the presidency.

Sorry, Shuster: It's True Source of Much Obama Funding Undisclosed

When a McCain campaign representative told David Shuster today that the source of much of Barack Obama's fund-raising is unknown, the MSNBC host scoffed, claiming only "right-wing" blogs could believe that and challenging the spokesman to cite a credible source.

Instead of fulminating about the conservative blogosphere, David might want to pick up a copy of Newsweek, which last time I looked had a news-sharing arrangement with . . . MSNBC.  None other than Newsweek's Michael Isikoff reported those very facts about Obama's fund-raising last week.

You would think what donors are cozy with which campaigns - especially in the midst of a presidential election cycle - might be a relevant story for the media,  especially at a time when everyone is quick to point fingers at which political party is to blame for financial turmoil.

When Lehman Brothers CEO Richard Fuld testified before the House Oversight Committee Oct. 6, the media criticized his wealth and spending amidst financial turmoil in his company and on Wall Street. But conspicuously missing was the story of Fuld's political contributions.

If you don't give me money, I won't bail you out!

Conservative opposition to a federal bailout of financial institutions is over campaign donations, not a desire to uphold sound market principles, according to CNBC.

CNBC's chief Washington correspondent John Harwood said Sept. 25 on "Squawk Box" that he had a conversation with "a top Republican member of congress last night" who told him the resistance among conservatives to the $700 billion bailout plan is in part due to Wall Street donations to Democrats.

"‘A lot of our guys have decided that we hate Wall Street ... because they're giving a lot of money to Democrats right now,'" Harwood said he was told by an unnamed source.

"We've talked about how nice the bi-partisan coming together of the far left and the far right to oppose this plan. It was heartwarming, right? That finally brought the fringe elements of both sides together on this," co-host Joe Kernen joked.

On Thursday's "Nightline," co-anchor Terry Moran trashed John McCain for running a hypocritical, dishonest campaign against Barack Obama. He accused the Republican of doing "the kind of thing that George W. Bush and his supporters did to McCain in South Carolina in 2000." The segment, which featured no examples of sleazy campaigning by Barack Obama, began with co-anchor Cynthia McFadden complaining, "Make no mistake, John McCain very well may defeat Barack Obama. But to do so, has he compromised principles in the style that got him this far?"

She also whined, "With just 47 days to the election, is the Straight Talk Express shifting course? Will the real John McCain please stand up?" Moran's tone dripped with sarcasm as he ripped into the Arizona senator's supposed hypocrisy. The ABC journalist fretted that McCain "clearly decided he's got to change. Change a lot, in some ways, in order to win this thing." As old and new clips of the candidate were spliced together, Moran added, "John McCain meet John McCain."

It has already been established (at NewsBusters; at BizzyBlog) that the Obama campaign's ad ridiculing John McCain's computer skills, including the claim that McCain "can't e-mail," has several reality-based problems:

So it's as clear as can be that Obama's ad is wrong and, intentionally or not, very mean to a man whose physical challenges are a result of beyond-the-call service to our country.

Beyond all that, Kevin Aylward at Wizbang has noted that McCain's 2000 presidential run was effusively praised as a groundbreaking high-tech campaign by a Democratic Internet pioneer in a 2005 book.

Check out this [emphasis added] excerpt from an LA Weekly report on Michelle Obama's appearance at a private fundraiser last Wednesday in the ritzy LA neighborhood of Holmby Hills.  Mrs. Obama was addressing a crowd that reporter Patrick Range McDonald described "heavily entertainment-industry."

Obama then moved on to politics, where she first brought up her husband’s vice-presidential choice. “I think it was a really good pick—Senator Joe Biden,” she said, and later added, “People say they have amazing chemistry, and it’s true.”

Obama continued with talk about Biden when she said, “What you learn about Barack from his choice is that he’s not afraid of smart people.” The crowd softly chuckled.

If a hypothetical tabloid owned by, say, Richard Mellon Scaife, had a cover story with scurrilous accusations about Joe Biden, do you think Chris Matthews would be waving it about on camera and Keith Olbermann citing it?  Neither do I. But if for some reason they did, would they possibly fail to mention the mag's ownership?

But Matthews saw fit—not once but twice—to display the cover of Us magazine, with its story "Babies, Lies and Scandals" about Sarah Palin. Olbermann alluded to it as well. And who is the owner of Us?  Jann Wenner,  the founder of Rolling Stone . . . and a big-time donor to Barack Obama. How big a donor?  You can view his list of contributions here, with an image after the jump.

Now it's true that Matthews discounted the "lies" allegation.  But why give currency to dubious accusations—by a magazine whose stock-in-trade is celebrity gossip—by displaying them repeatedly on a national news show?  There was no suggestion that Us, unlike the National Enquirer in John Edwards' case, had done any significant independent reporting. This is apparently scandal-mongering, pure and simple. And of course, neither Matthews nor Olbermann mentioned the Wenner connection.

By Clay Waters | August 27, 2008 11:36 AM EDT
"Obama Campaign Wages Fight Against Conservative Group's Ads" is the third story from New York Times reporter Jim Rutenberg in five days that attacks an anti-Obama ad from the American Issues Project that questions the ties between Obama and homegrown terrorist Bill Ayers, cofounder of the Weathermen, the group that tried to blow up the U.S. Capitol in 1971.

In each story, Rutenberg appears far more worked up about the legality of the ads than in the underlying facts of Obama's relationship with Bill Ayers, an unrepentant terrorist turned professor of education in Chicago. The first 10 paragraphs of Rutenberg's online filing Wednesday are devoted to the back-and-forth machinations, again questioning the group's funding while suggesting dubious links to the McCain campaign. Rutenberg noted that Obama is striking back with a counter-ad and the threat of legal action to have the ads taken down.

For good measure, Rutenberg took another bite out of the best-selling book "The Obama Nation" (his first one was in a front-page story on August 13).