This doesn’t need much added to it:

On this day in the year 2000, the guided missile destroyer USS Cole was attacked by Islamic terrorists associated with Osama bin Laden's al-Quaeda group. Today is the seventh anniversary of that attack. Seventeen American sailors were killed and thirty-eight injured in the attack which severely damaged the ship. Yet not a single major media organ has reported this so far.

Attacking a warship has been long viewed as an act of war. The most recent example occured in 1968 when North Korea attacked the USS Pueblo. To our national shame, the Pueblo is still in the hands of that country. A rather more forceful response occurred in 1941, when Japan attacked the US Pacific Fleet at anchor in Pearl Harbor.

As CNN's Howard Kurtz accurately pointed out on Sunday's "Reliable Sources," few media outlets seemed at all interested in giving much attention to the great news out of Iraq last week regarding September's sharp decline in casualties.

To Kurtz's obvious frustration, his guests - Robin Wright of the Washington Post and Barbara Starr of CNN - both supported the press burying this extremely positive announcement.

After introducing the subject, Kurtz asked, "Robin Wright, should that decline in Iraq casualties have gotten more media attention?" 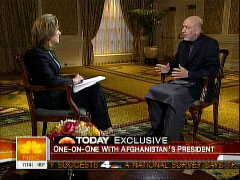 It's not enough that the media is waving the white flag of defeat in Iraq but now they're declaring yet another war lost. NBC's "Today" co-host Meredith Vieira seemed so convinced that the U.S. had lost the war in Afghanistan she was perplexed when Afghanistan's President Hamid Karzai didn't share her assessment of failure.

After hearing the apologists defend the paper in countless ways, the New York Times puts them all in an awkward position and admits to giving a huge discount for Moveon.org.

Appearing on "The Daily Show," Wesley Clark compared American troops in Iraq to "space invaders" who "bust down your doors and rough up your women and throw you on the ground." Sounds exactly like what John Kerry said two years ago.

According to the Manhattan Borough President and the New York Civil Liberties Union, "military recruiters are frequently given free reign in New York City public schools and allowed into classes in violation of the school system’s regulations." That's basically the first paragraph of the article. The next few read as follows:

Why does a small-budget movie like Brian De Palma's “Redacted” matter? Because of the ripple effects. The media have reported the film as "a ferocious argument against the engagement in Iraq for what it is doing to everyone involved.” Meaning the media are taking these deeply anti-war, anti-military storylines as De Palma intended, as a serious discussion of the day-to-day “realities” of Iraq.

Brian De Palma wants to stop the war, and he thinks his new movie about an Iraqi girl's rape can help, regardless of the consequences or the rights and privacy of Iraqis. In a Friday August 31 Reuters article, De Palma asserted “The movie is an attempt to bring the reality of what is happening in Iraq to the American people. Sky News online picked up the thread that he hoped his film "Redacted" will alert people about “these horrible things things that are happening, this horrible war that I am financing as an American citizen.”

De Palma's comments were made Friday, at the Venice Film Festival, after showing the movie that is supposedly based on the rape of a 14-year-old Iraqi girl from Mahmudiya who was then killed and her house set on fire. You know, every day stuff in the military.

“Redacted” is a do-over for De Palma, who made the same movie back in 1989 when it was called “Casualties of War” and starred Michael J. Fox. This is De Palma's second try at the “American military rapes indigenous girl and everyone laughs, but the sensitive guy feels sorry and tells; someone has nightmares, and the military is still bad” storyline. At least it wasn't “The Bonfire of the Vanities 2.”

National Public Radio provided publicity to the leftist website Salon.com on three shows Thursday for their release of previously unseen (if not notably different) pictures of American abuses at Abu Ghraib. Nowhere in their three dollops of publicity did NPR label Salon as liberal or left-wing, or explain that they oppose President Bush and the war in Iraq.